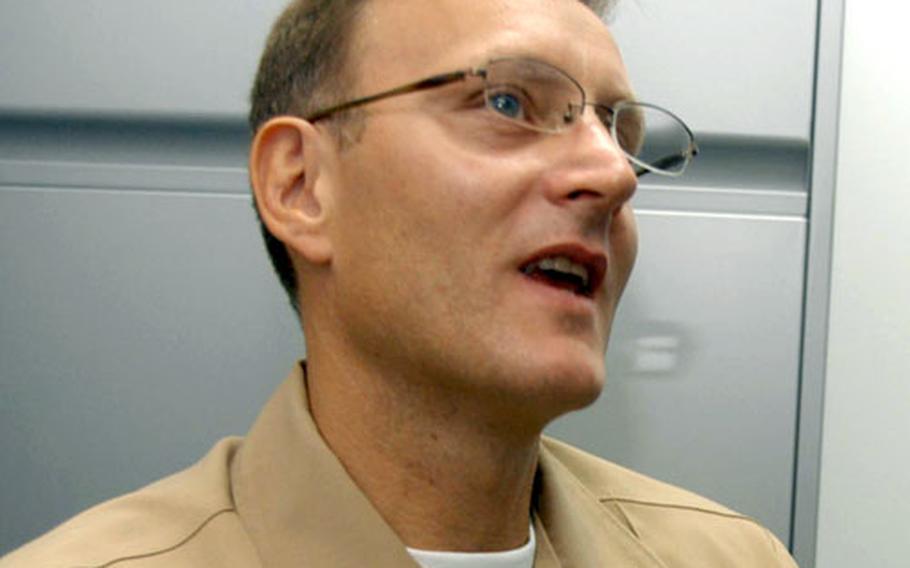 YOKOSUKA NAVAL BASE, Japan &#8212; It was early morning at the main gate of Camp Habbiniyah in Iraq. Civilian day laborers were lined up outside, waiting to undergo the daily entry search on their way to work, when a bomb went off, killing 14 of them.

Chief Petty Officer Joseph Friddle, a hospital corpsman, treated the 14 who ultimately didn&#8217;t make it, and saved the life of another civilian who did. For that, and other combat actions during his sixth-month Iraq deployment, he earned the Bronze Star Medal.

The 38-year-old is a reluctant recipient, though. Friddle refused a big presentation and hadn&#8217;t planned on wearing the medal in his job as an independent duty corpsman at U.S. Naval Hospital Yokosuka.

Friddle was tasked to go to Camp Habbiniyah last May. His job was to work with eight Americans and 2,000 Iraqi troops to design and build a medical facility at the forward-deployed base.

Easier said than done. Camp Habbiniyah may be in the &#8220;middle of nowhere,&#8221; but it was constantly under attack, Friddle said.

Convoys would be lost en route, leaving Friddle without medical supplies he needed to care for the mostly civilian casualties and injuries around the base. But sometimes his Yokosuka command mailed him medical supplies and care packages &#8212; both deeply appreciated, he said.

It was Friddle&#8217;s first time in a combat zone, but his &#8220;unequaled dedication to adaptability&#8221; made him a candidate for the Bronze Star Medal, according to the narrative that accompanies the award.

Friddle created, designed and tested a mass casualty plan for the camp. He led a team to create a regional medical center to serve all military personnel in the Al Anbar province, and his use of existing buildings saved hundreds of thousands of dollars, the narrative says. Under his watch, illegal black water dump sites were cleaned up and dining and residential inspection programs were enacted to keep military and civilians healthy.

&#8220;[Friddle] established a system that will endure long after his departure,&#8221; the narrative reads.

When asked if he wanted to return to Iraq, Friddle declined to answer. He did, however, give some advice to the Yokosuka-based personnel who want to go there.