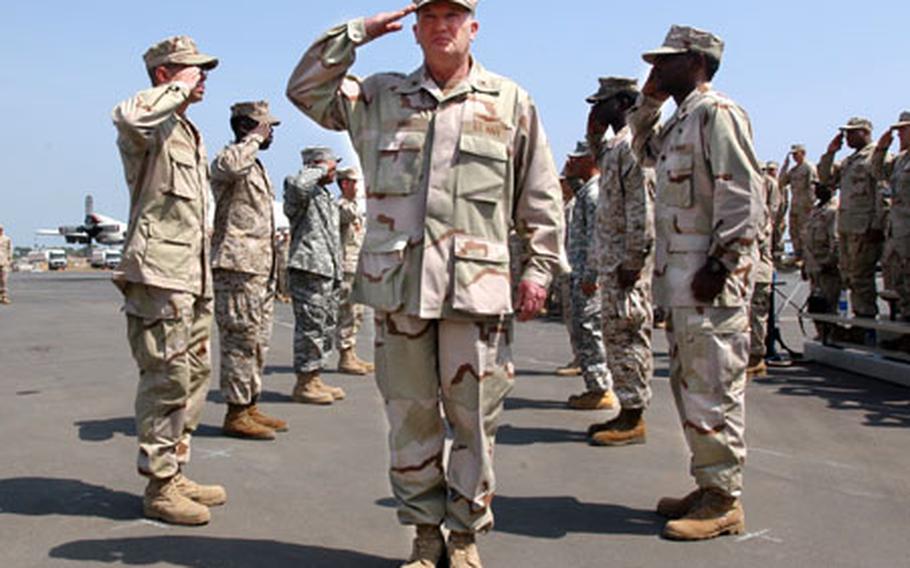 Rear Adm. James Hart, the new commander of Combined Joint Task Force - Horn of Africa, passes through a row of saluting servicemembers during a change of command ceremony on Feb. 14 at Camp Lemonier, Djibouti. (Eric A. Clement / Courtesy of U.S. Navy)

The new commander of the U.S.-led anti-terror task force in the Horn of Africa said this week his priority is continuing on the momentum of the mission built up by his predecessor over the past year.

The mission of the Horn of Africa task force, officials have said, is to prevent Islamic militants from establishing a foothold in a region whose widespread poverty, instability and lack of food and water make it a potential breeding ground for terrorists.

U.S. policymakers and commanders point to the 1998 bombings of U.S. embassies in Kenya and Tanzania and the 2000 bombing of the USS Cole in Yemen, as well as the fact that the Sudan once played host to Osama bin Laden, as symptoms of the region&#8217;s instability.

To that end, the task force has doubled in number since being established in 2003, and its base at Camp Lemonier, Djibouti, is undergoing a major expansion.

Hart said the change in command staff would not slow the mission.

&#8220;As we go through this turnover and transition process, we will change out a third of the Headquarters staff over a seven- day period; and making big changes in personnel is always challenging,&#8221; Hart said, according to a military news release. &#8220;Now we have to start the process of coming together and building a new team. This process affords us a great opportunity to leverage off the superb work accomplished by our predecessors.&#8221;

Gen. John Abizaid, the outgoing head of the U.S. Central Command, attended the ceremony; the task force falls under CENTCOM.

&#8220;The work of Admiral Hunt and the people under his command reflects remarkable skill as they advance the most important interests of the United States,&#8221; Symington said.