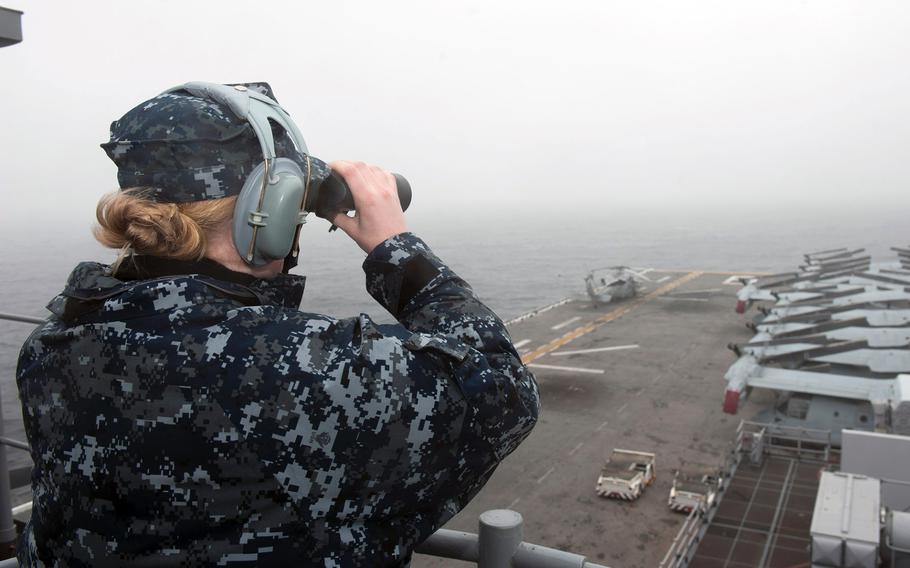 Seaman Ashlee Stone scans the horizon from the forward lookout of the USS Bonhomme Richard. Sailors and Marines aboard the amphibious assault ship are conducting search and rescue operations as requested by the Republic of Korea navy near the scene of the sunken ferry Sewol in the vicinity of the island of Jindo. (Adam D. Wainwright/U.S. Navy)

SEOUL — The U.S. military continues to assist South Korea search for survivors of Wednesday’s ferry sinking in the Yellow Sea, even as the prospect of finding anyone still alive seems increasingly unlikely.

Two U.S. MH-60 helicopters based on the USS Bonhomme Richard were still conducting search-and-rescue operations in the Yellow Sea near the site where the Sewol sank, U.S. and South Korean officials said Friday.

The U.S. Navy is also sending two salvage specialists from Singapore to the area Saturday to provide advice during operations, according to South Korea’s Ministry of National Defense.

Nearly 270 of the ship’s 475 passengers, many of them high school students on a trip to Jeju Island, remained missing as of Friday evening; 28 have been confirmed dead.

“Our thoughts and prayers remain with the passengers of the Sewol and their families during this very difficult time,” Commander, Naval Forces Korea, said in a statement released Friday.

The command did not respond to questions about whether any additional U.S. military assets would become involved in the search, the current location of the Bonhomme Richard or when it would leave the area.

An MND spokesman said that 30 U.S. medical personnel, including five doctors, were on standby on the Bonhomme Richard to care for any passengers who might be pulled from the wreckage.

But nearly two days after the accident, it appeared increasingly unlikely that any survivors would be pulled from the chilly waters near Jindo, on the southwestern coast of the peninsula. The MND spokesman said that officials were still considering the operation a search-and-rescue operation rather than recovery mission.

The Bonhomme Richard, an amphibious assault ship based in Sasebo, Japan, was conducting routine maritime operations in the region when the Sewol issued a distress signal shortly before 9 a.m. Wednesday. Two MH-60 helicopters equipped with lifeboats were initially dispatched from the Bonhomme Richard to the disaster site but were recalled on Wednesday.

One of the MND officials said Friday that the U.S. helicopters returned to the ship because, with so many South Korea helicopters already on site, the U.S. aircraft were not needed.

On Thursday, two U.S. MH-60 helicopters searched an area about five to 15 nautical miles, or six to 17 miles, from the disaster site at the request of the South Korean commander directing the search, according to CNFK.

U.S. President Barack Obama, who will visit South Korea next Friday and Saturday on a trip to Asia, issued a statement Thursday offering condolences to the families of victims of the tragedy.

“The bonds of friendship between the American and Korean people are strong and enduring, and our hearts ache to see our Korean friends going through such a terrible loss, especially the loss of so many young students,” the statement said.