Hoop-groupies gaze at the stars 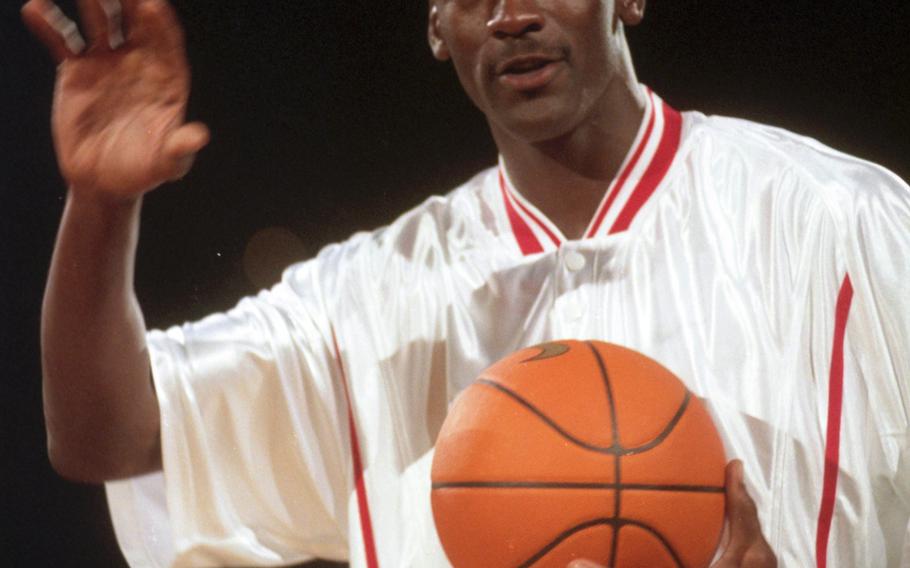 TOKYO — There they sat like a couple of good-time Charlies sharing a few yuks with some close friends. Just a bunch of locker room banter between buddies with the pop of 10,000 camera flashes illuminating their famous bald domes. Just another day in the celebrated lives of Michael Jordan and Charles Barkley & Co. Only this day dawned in the Land of the Rising Sun.

Jordan and Barkley, along with fellow Nike-sponsored comrades Michael Finley, Damon Stoudamire and Jason Kidd, came to Japan as part of the Hoop Heroes Tour, a promotional circus that plays to packed houses of admirers wherever they go.

And so when the curtain came up again, this time in Tokyo, there were as many hoop groupies on hand with autograph pens and happy-snap cameras as there were media members hoping that some shred of news would pop up during the 50-minute love feast.

There was the reporter from Korea who giggled, "When are you going to come to Korea to try our golf courses?" She was followed by a brazen Japanese woman from a local television station who extended an unusual request: "We have a virtual reality golf course set up at our studio. Please come by next Sunday morning to try it. And please stare into the camera when you answer the question."

All of this must have seemed like virtual reality to Jordan, who touched down on Monday for the first time in Japan. His mission: to play a pair of pickup basketball games Thursday and Friday at Yokohama Arena. Kind of a shirts vs. skins for millionaires, with oglers paying upwards of $500 for a courtside seat.

A dozen of Japan's best players will join the Nike heroes on the court, including 36-year-old Yasuaki Ikeuchi, a veteran of the Sumitomo Metal Sparks, a team that Barkley would pick over a lot of teams in the NBA's Eastern Conference.

With most of the attention focused on him, Jordan was at his diplomatic best. Far away from the pressures of an NBA season and with a new $30 million, one-year contract under his belt, and with no probing questions about his tumultuous personal life or his temperamental, yet talented teammates, Jordan was relaxed and rested and ready for fun. And Charles? Well, Charles was Charles.

There were as many questions about golf as there were about basketball. There was even a query regarding Tiger Woods, the 20-year-old African-American golfer who just joined the PGA Tour, and as coincidence would have it, is also a Nike-sponsored athlete.

"I think he's probably under more pressure than any athlete since Jackie Robinson," Barkley said. "He's trying to break the color barrier in golf.'

Among the other topics of discussion during the session was a case of true confessions from His Airness regarding a fear of flying.

"Do you fly coach or first class?" Barkley quipped. Obviously a rich man's joke, but it played well through the translation: If you really must know, Jordan actually flew over here on a private jet.

Jordan talked up the competition around the NBA. Barkley slam-dunked it, especially the Eastern Conference.

"Other than Indiana and Chicago there aren't really any good teams," the 12-year veteran said. "Michael's always trying to be cordial, but most of the teams in the East couldn't play dead."

As for Barkley's new team, the Houston Rockets aren't getting older, they're getting better with the addition of Barkley.

"I think Seattle's the team to beat in the West, and I think we are very good too. I think San Antonio and Utah are pretty good, and you can throw the Lakers in that group."

Making his second trip to Japan (his first was in 1992), Barkley's reputation for speaking his mind spans the globe. He was asked about his new number (4) and what he thinks of his new team's uniforms.

"I'm not crazy about them but if that's what they play in, that's fine," he said.

Barkley also took a potshot at the Phoenix Suns.

"Sometimes in the States, when they pay you a lot of money they want to treat you bad. I don't believe that. Just because they pay you does not mean they own you," Barkley barked. "You can never let anybody take your pride from you. I would've sat out the whole season just to prove a point.

"I've had a lot of players come up to me and say, 'We wish we were in the same situation, we're fed up with the system.' I don't care. I made them so much money they're going to respect me."

As for Barkley's old team, Finley managed a little trash talking of his own, "I think we're a better team without Charles." It's probably good that Finley laughs while he can because it's going to be a long season in the Valley of the Sun.

There was even a question for Stoudamire, last season's Rookie of the Year. The 5-foot-11 point guard was asked for advice on how to succeed in a big man's game.

"Just always go out and play hard. Especially if you're small." Words worthy of a Hallmark card.

The few basketball-related questions posed to Jordan centered on his amazing competitive spirit, his ability to play through pain and how long the 33-year-old superstar would continue to thrill his fans.

"Right now I just want to take it year by year," Jordan said. "I've enjoyed each and every year that I've played the game. I don't want to put a time frame on how I feel about my love for the game."

How much the Japanese fans love Jordan was evident in how quickly Thursday night's pickup game sold out. There are still tickets available for Friday's "event," but sorry, the $500 seats are sold out.

"We're very fortunate to see how popular we are in different countries around the world," Barkley said. "We want to make sure everybody has a good time because we're going to have a good time. When you're playing with Elvis (Jordan) here, he's going to make sure you have fun."

If the games are half as entertaining as Wednesday's meet-the-press gigglefest, they'll be a load of laughs.