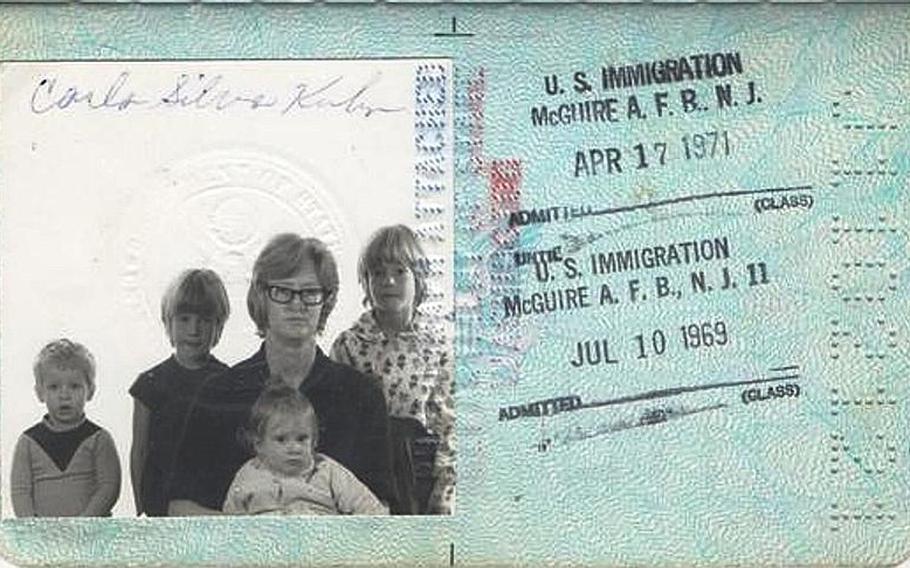 Elizabeth Kuhn is pictured, from left to right, with her brother, Billy, and sisters Mary and Katrina, and held by her mother, Carla Syliva Kuhn, in the family's passport photo. Elizabeth died at 20 months of age in 1968. She is buried in the Kindergraves in the Kaiserslautern city cemetery in Germany. (COURTESY OF KATRINA LUNSFORD) 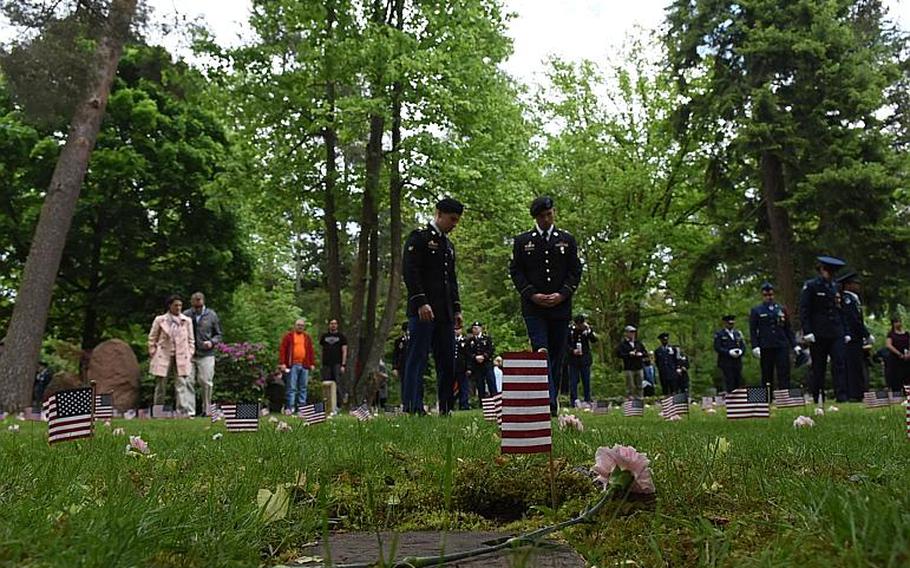 Buy Photo
Military personnel and local community members walk among the Kindergraves on Saturday, May 20, 2017, in Kaiserslautern, Germany. Germans and Americans remembered the 452 American children buried in the Kindergraves during an annual memorial ceremony. (Jennifer H. Svan/Stars and Stripes)

KAISERSLAUTERN, Germany - For years after her infant son died, Mary Petyo couldn’t talk about him.

At the time, she was a young Army wife of 19, stationed with her husband, John, in Kaiserslautern.

Michael John Petyo, the couple’s second son, died in 1958, two days after he was born prematurely at the Army hospital in Landstuhl.

The family has long since left Germany - all except Michael, who was buried in a section of the Kaiserslautern city cemetery.

But Michael and the 451 other American children with stone markers in the Kindergraves are not forgotten.

On Saturday, a small American flag and pink carnation were placed next to each grave. Every spring, Germans and Americans come together for an annual memorial ceremony to remember the children of U.S. military personnel who died between 1952 and 1971 while their families were stationed here.

During that period, the military would not pay to send the remains of young children stateside, officials have said.

The German American & International Women’s Club and the Ramstein Area Chiefs’ Group oversee the upkeep of the Kindergraves, which last year grew to 452 with the addition of a stone marker for Gary Currie.

The marker for Currie was added last year in the Kaiserslautern Kindergraves as a symbolic gesture, after no records could be found indicating where the boy’s final resting place was.

In a somber tribute at Saturday’s ceremony, Maj. Gen. Timothy M. Zadalis, U.S. Air. Forces in Europe - Air Forces Africa vice commander, dug a small hole next to Currie’s marker and buried a military coin. That coin had touched another military coin that Zadalis mailed to Caffey, in hopes of giving the mother “one little bond” to her son, he said.

Those attending the ceremony may hear the wind blowing through the trees by the graves, Zadalis said, adding it’s the sound of the children and their families, saying “thank you to all of us for not forgetting.”

Lunsford was six when Elizabeth died in 1968 from a meningococcal infection at the age of 20 months.

“I thought of having her interred to the U.S. but decided that I wanted her to remain at rest and not disturb her peace,” Lunsford said.

“We are eternally grateful for those that have taken up the cause of maintaining the graves for us as we cannot be there as we would like.”

Petyo, 77, now lives in Fort Myers, Fla. She has taken her other children to see Michael’s grave and the family attended the Kindergraves memorial ceremony in 2010. But now that she and her husband, 81, are older, it’s difficult to make the trip.

“I miss him dearly,” she said of Michael. “I wish I would have had him here so I could bring flowers to him. I just can’t go to the cemetery and that’s my heartache, that he’s not here in America with us. He’s so far away.”