Honor for son is teary surprise for command sergeant major 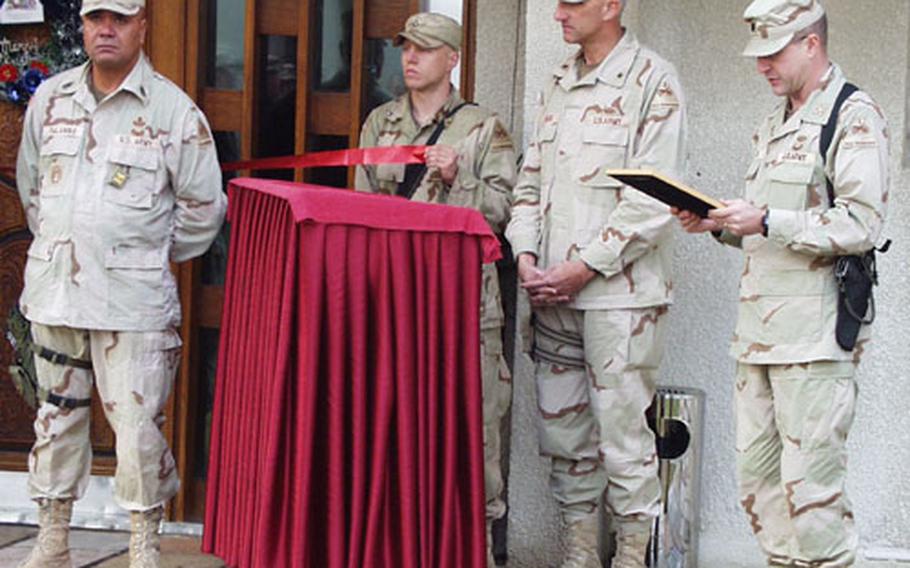 Command Sgt. Major Ioakimo Falaniko of the 1st Armored Division Engineer Brigade, left, listens Tuesday as a section of the Freedom Rest soldier relaxation compound is named after his son. A soldier, center, and Brig. Gen. Mark Hertling, assistant commander of the 1st Armored Division, look on. Falaniko&#39;s son, Jonathan, was killed by a rocket-propelled grenade in Iraq on Oct. 27. (Ward Sanderson / S&S)

BAGHDAD, Iraq &#8212; At the memorial service, the command sergeant major did not cry.

On Tuesday, he did.

But it was not out of mourning. It was out of surprised gratitude.

&#8220;This is the first time these guys saw tears in my eyes,&#8221; said Command Sgt. Maj. Ioakimo Falaniko of the 1st Armored Division Engineer Brigade. His brigade, unbeknownst to him, had named a newly renovated house on the military&#8217;s Freedom Rest recreation compound after his fallen son, Pvt. Jonathan Falaniko. The 20-year-old died Oct. 27 in a rocket-propelled grenade attack. He was attached to his father&#8217;s brigade.

The brigade surprised the elder Falaniko on Tuesday with the afternoon unveiling. Brig. Gen. Mark Hertling, assistant commander of the 1st Armored Division, was there. So was Lt. Gen. Ricardo Sanchez, commander of U.S. forces in Iraq.

Falaniko&#8217;s fellow soldiers and Iraqi contractors refurbished the place themselves. Now, the Falaniko Inn is bright and stuffed with Mideast furniture, pillows and rugs.

After the ceremony, soldiers walked up to Falaniko and clasped his arm. Several reporters, too, stopped Falaniko. His eyes were red-ringed from emotion, but he didn&#8217;t turn the microphones or note pads away.

Falaniko said being a public face for the brigade is now part of his job. The rebuilding of Iraq will take time, he said. And in his opinion, it was better for him &#8212; and his late son &#8212; to serve in Iraq now than have future generations do so.