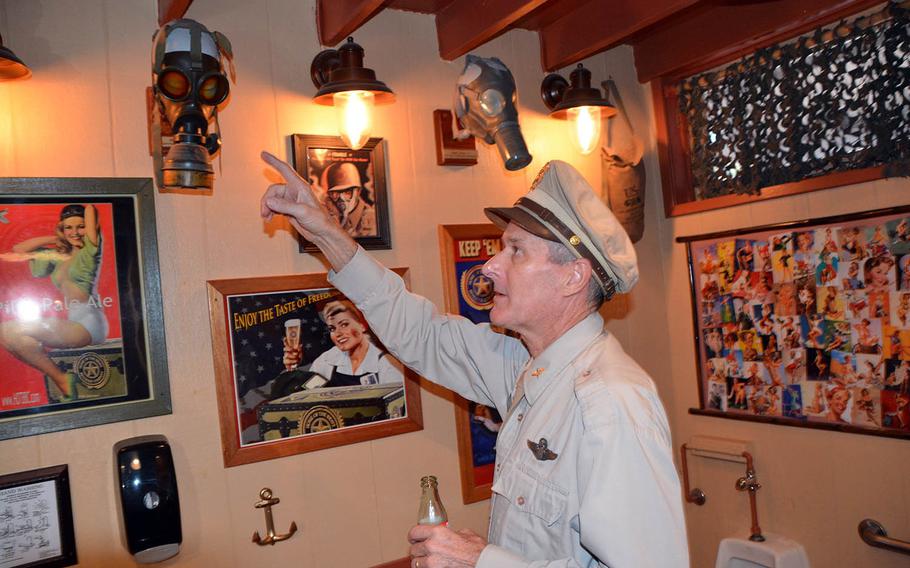 Glen Tomlinson, owner of the Home of the Brave Museum in Honolulu, stands beside a collection of World War II artifacts donated over the years by war veterans. (Wyatt Olson/Stars and Stripes)

Glen Tomlinson, owner of the Home of the Brave Museum in Honolulu, stands beside a collection of World War II artifacts donated over the years by war veterans. (Wyatt Olson/Stars and Stripes) 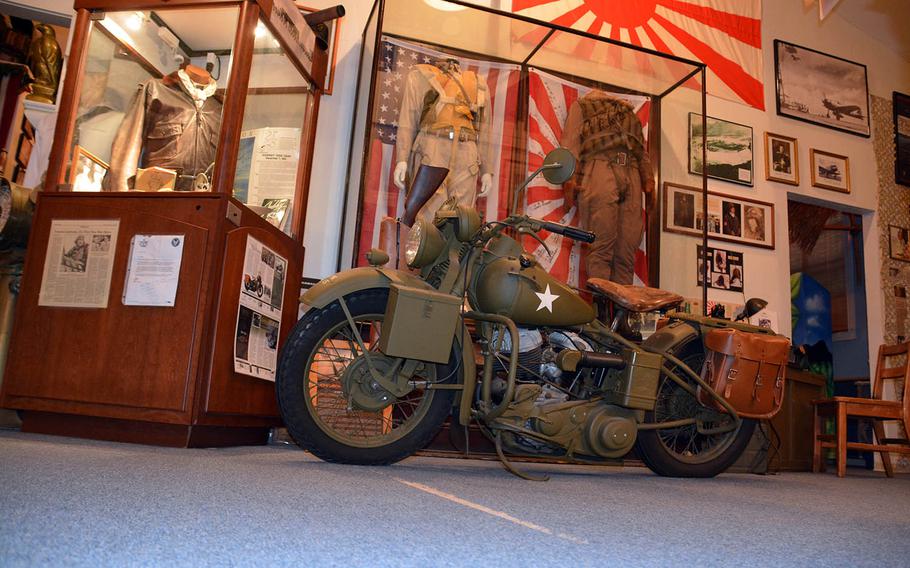 A vintage World War II-era Harley-Davidson motorcycle is one the "interactive" displays at the Home of the Brave museum in Honolulu. Visitors are welcome to hop on. (Wyatt Olson/Stars and Stripes) 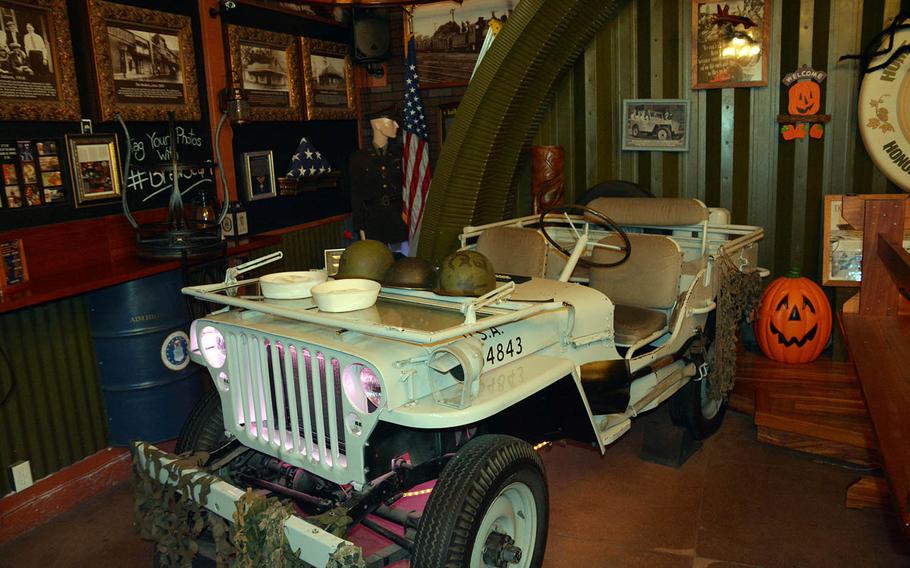 Tipplers can sit behind the wheel of a 1942 jeep at the Home of the Brave Brewseum in Honolulu. (Wyatt Olson/Stars and Stripes) 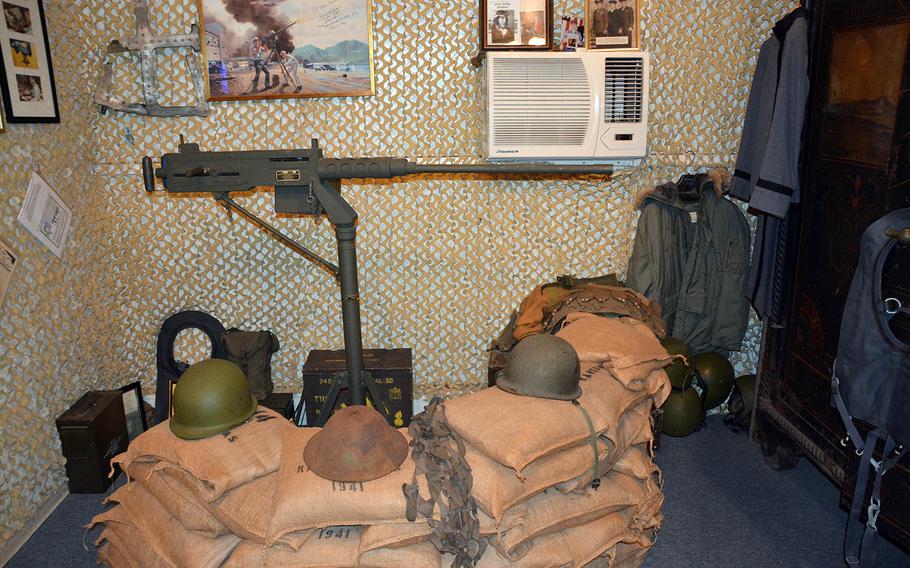 A tribute at the Home of the Brave museum to John Flynn, the first recipient of the Medal of Honor in World War II. Flynn, who was a regular visitor to the museum before he died at age 100 in 2010, had been a sailor stationed at Naval Air Station Kaneohe Bay, Hawaii, during the Japanese surprise attack on Dec. 7, 1941. (Wyatt Olson/Stars and Stripes) Behind the displays at the Home of the Brave museum in Honolulu is a microbrewery, one the revenue-generating attempts by the museum's owner to stay afloat. (Wyatt Olson/Stars and Stripes) 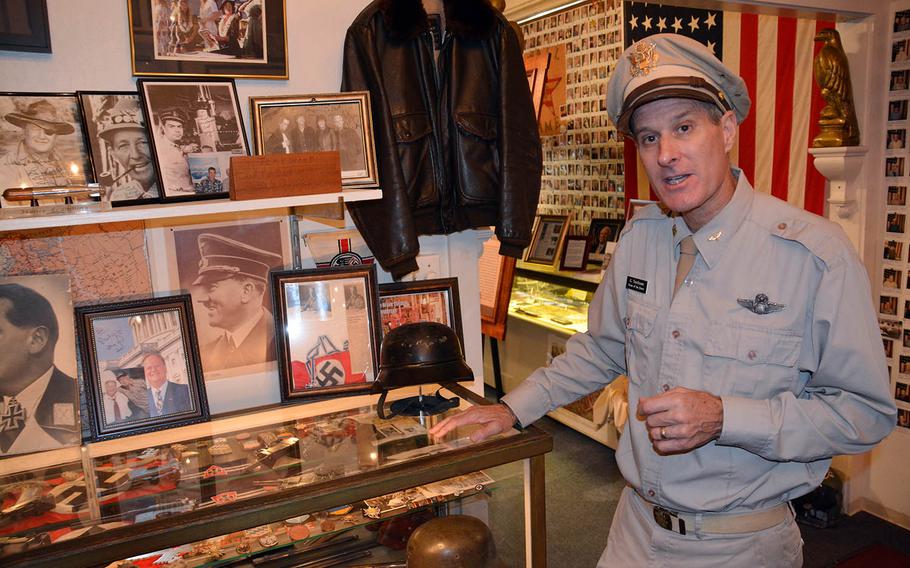 Glen Tomlinson, owner of the Home of the Brave Museum in Honolulu, stands beside a collection of World War II Nazi artifacts donated over the years by war veterans. (Wyatt Olson/Stars and Stripes)

FORT SHAFTER, Hawaii — Back in 1991, Glen and Janet Tomlinson kicked off a temporary program called Home of the Brave, Honolulu-based tours coinciding with the 50th anniversary of the surprise attack on Pearl Harbor.

“It was to take Pearl Harbor survivors back to the battle sites,” Glen Tomlinson said of the two weeks of tours that included Oahu’s memorials, military bases and veteran cemetery.

He and his wife little suspected that the Home of the Brave excursions would continue for 25 years, expanding into a full-throated military museum stocked with World War II memorabilia and artifacts donated by thousands of veterans who took the tour over the decades.

“These are the treasured memories of over 100,000 World War II veterans who have come through here,” Tomlinson said recently as he showed a reporter around the museum jam-packed with photos, letters, banners, flags, uniforms, medals, guns, knives and a whole lot more. Hundreds of snapshots of veterans who’ve visited the past few years line the walls.

But now the museum — and enterprises such as a brew pub meant to keep it solvent — is on the verge of collapse.

The revenue-generating tours ended a year ago, a victim of waning interest by younger tourists and changes to the tour-booking industry on Oahu, Tomlinson said.

A year ago, he took out a second mortgage on his home to keep the museum afloat as he searched for solutions or a benefactor, but that money has now been spent and he says he must sell the house.

He set up a GoFundMe account this fall, the last-ditch effort to raise $100,000 before the museum will be forced to shut down at the end of the year. He called it “my final Hail Mary pass” to “call out to America to help us keep the museum alive for our children and generations to come.”

If enthusiasm alone could keep the museum running, then Tomlinson’s disposition would keep the doors wide open. During the tour he could barely contain himself as he weaved tales, moving from item to item, sometimes leaving an anecdote unfinished as another artifact caught his eye.

Tomlinson was dressed in an Army uniform similar to the one worn by “Uncle Tommy,” his father’s brother who was in special operations in the Pacific theater during World War II. His wife’s mother had worked on a B-17 bomber assembly line as a “Rosie the Riveter.”

“As kids, we heard all these stories,” said the 56-year-old Tomlinson.

And stories are the heart of the Home of the Brave museum; they are what has driven Tomlinson all these years.

“That’s what makes this place so special; it’s the stories,” he said. “It’s not the guns and knives and everything else.”

For example, amid a display about bombers is the story Regine Lheridaut, a women who worked in the French resistance during the war and assisted hundreds of U.S. and British airmen evade capture after being shot down. Tomlinson met her on a trip to France in 1995, and she showed him a silk escape map a pilot had left her with as a parting gift back then. Could Tomlinson locate this man? she asked.

He did, and the B-17 co-pilot, Ralph Patton, was still alive, more than a half-century later. Patton expressed amazement that this “old lady” was still alive when Tomlinson reached him by phone.

On display is a photo of pilot and rescuer standing side by side, the former in his 80s, the latter in her 90s, during their reunion in 1995.

For the families of some survivors of the surprise attack on Dec. 7, 1941, the Home of the Brave tour and museum served as their first real glimpse of veterans’ experiences.

“We’d have the wives and families in tears, and we’d be like, you must have heard this a million times. They’d say, ‘He never talked about it.’”

The emotional connection veterans and their families felt with the tour led to their continual donation of artifacts that have built the museum into the sprawling affair it is today, all housed in Honolulu’s warehouse district in a building that long ago was a horse stable. Much of it is “touch-feely,” as Tomlinson describes it, where anyone call crawl into a vintage jeep, straddle an Army-issued Harley motorcycle or man a machine gun.

“We call it hands-on history,” he said. “An experiential museum.”

But changing demographics have been the museum’s enemy.

Tomlinson recalled 6,000 Pearl Harbor attack survivors taking the tour in 1991. Only 200 passed through the museum last December on the 75th anniversary.

“Now, we’re lucky to get one or two WWII veterans a month,” he said.

A milestone in the tour’s decline came in 2001 when the tour bus was no longer given access to the flight line and bullet-scarred walls at Joint Base Pearl Harbor-Hickam due to heightened security concerns, he said.

The death knell for the daylong, $69 tours aboard the 25-passenger mini-bus came with tour agencies insisting on ever higher commissions for selling the tours. Tomlinson said they’d done well paying out a 30-percent commission for years, but agencies began requiring 40 to 60 percent commissions, and it killed the tour about a year ago.

The tour’s demise was gradual, though, and Tomlinson devised other means of revenue. A 1940s-style “speakeasy” bar on the second floor offers themed cocktails and beer.

About four years ago, Tomlinson’s son Duke convinced the family that microbrewing beer might be the answer. They rented a small termite-riddled warehouse two buildings down, gutted it, bedecked it in WWII-themed artifacts and began selling their own craft beer in what they’ve dubbed “The Brewseum.”

They put no small effort into naming the dozen-odd brews, many of which commemorate the 75th anniversary of the 1941 attack. Among the beers are Code Talker ginger guava ale, PT 109 kolsch and John Finn golden mango, named for WWII’s first Medal of Honor recipient, who was a surprise-attack survivor.

“We can’t sell enough beer or cocktails to pay the rent on this place,” Tomlinson said, the enthusiasm ebbing a bit from his voice.

While the Brewseum would probably be able to support itself independent of the museum, it can’t: the brewing vats and cooler are in the back of the museum. There is no room for them in the Brewseum.

His pie-in-the-sky solution would be for a billionaire benefactor to step forward and relocate the entire museum collection to, perhaps, a themed restaurant.

More realistically, he’s hoping the GoFundMe cash could pay the rent and keep the lights on a few more months until some other solution is found.

The worst-case scenario, he said, is having to sell or donate the collection.

“The museum has been the titanic that’s just tugged on my heart because that’s what I’m all about,” he said. “I would like to keep this thing together.”