Homemade food in the field? You bet 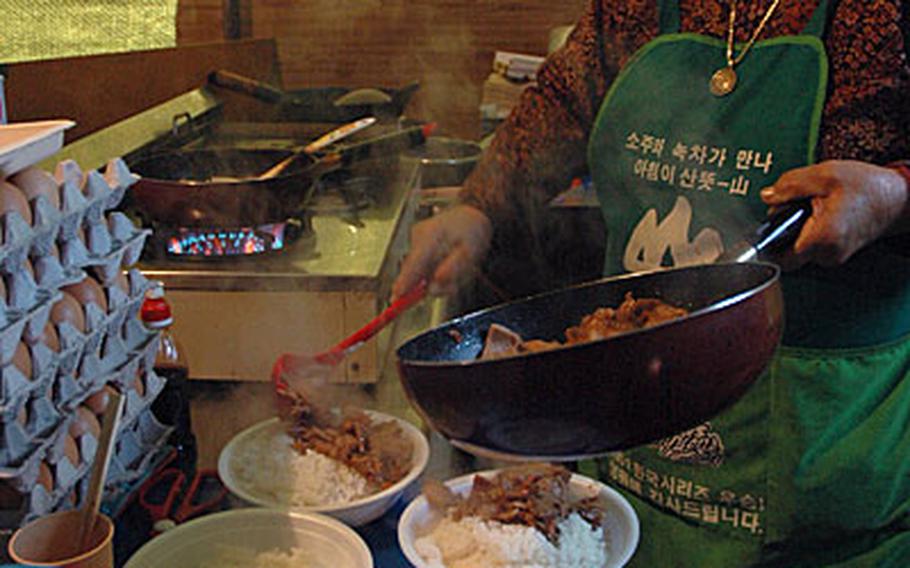 Lee Gi-nam serves up four bowls of bulgogi and rice just before noon. Lee says she and her sister have been cooking for U.S. troops training in the field in South Korea for 40 years. (Teri Weaver / S&S)

Lee and her sister have been cooking for U.S. troops in South Korea for 40 years, Lee said. They set up their tent inside the wire, stock coolers with frozen meats and cheese, bring homemade kimchi, and fry up comfort food one dish at a time.

The battalion was at TAA-Tom last week undergoing an external evaluation, drilling through a series of mock war scenarios to hone skills and to offer the commander a look at how the unit works in the field.

On Tuesday just before noon, Van Meter stood inside Lee&#8217;s tent in a growing but patient line. With only two burners and a grill, the cooking takes time. Still, no one gives up and leaves, especially when field training means the Army supplies hot breakfasts and dinners only.

&#8220;Busy, busy, busy,&#8221; Lee sang as she worked her way through the orders of bulgogi &#8212; stir-fried beef over rice. She also will make chicken-fried rice, a variety of ramen, egg-cheese-and-ham sandwiches and a house favorite &#8212; a bulgogi sandwich, which is a pile of bulgogi meat, a fried egg and a slice of cheese set between two fried pieces of bread. All cost about $3 to $5 each.

When Lee is around, it&#8217;s hard to lose weight in the field, the soldiers say.

She won&#8217;t say how she learns the training schedule. But she comes prepared.

Feed-sized bags of rice surround her camping kitchen. Plastic jugs of oil line up near the kimchi, spicy and fermented cabbage. She&#8217;s got two rice steamers, a cot for sleeping, and a generous supply of packaged cookies, chips and sodas.