Homecoming not the same without fallen comrades 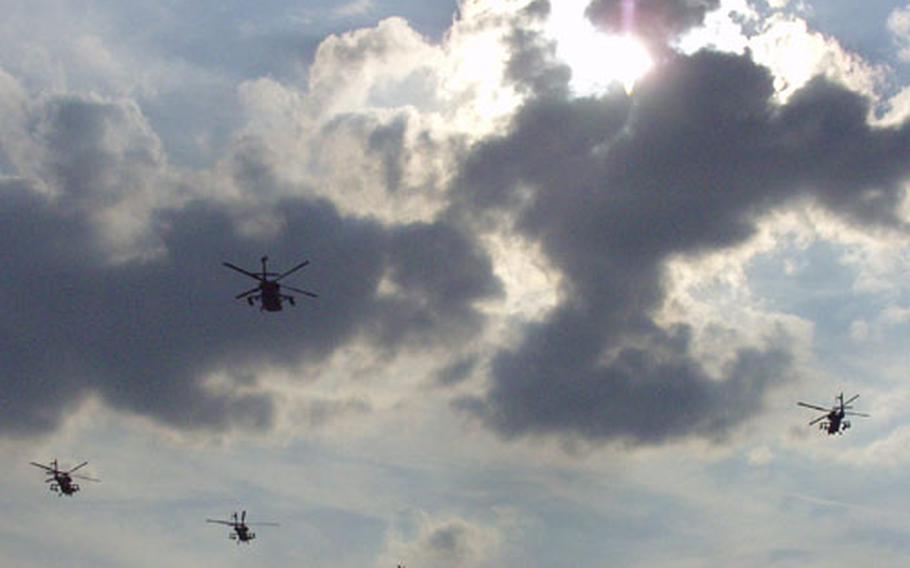 AH-64 Apache pilots from Charlie Company of the 1st Battalion, 1st Aviation Regiment fly a missing man formation upon their return last month to their base in Katterbach, Germany, after serving a tour in Kosovo. They flew the special formation in memory of two pilots, Chief Warrant Officer 3 Andrew Robbins and Warrant Officer Devon DeSouza, who died in a training crash in Koso on June 8. (Steve Liewer / S&S)

For several days in mid-June, he had personally escorted the pilot&#8217;s casket: from Ramstein Air Base, Germany, to Dover, Del; Dover to Dallas, even riding to the funeral home that would prepare Chief Warrant Officer 3 Andrew Robbins for burial at a national cemetery in Texas.

He hugged Robbins&#8217; wife, Cheryl, and comforted their children, Michael and Alyssa.

Robbins and his co-pilot, Warrant Officer Devon DeSouza, died June 8 in Kosovo when their AH-64 Apache helicopter hit a thick cable and crashed on a mountainside during a nighttime training mission. Except for two suicides, they were 1st Infantry Division&#8217;s only fatalities during an extended eight-month rotation in Kosovo that ended late last month.

Robbins and DeSouza had deployed to Kosovo from Katterbach, Germany, in April, one of six Apaches from Charlie Company of the 1st Infantry Division&#8217;s 1st Battalion, 1st Aviation Regiment to head downrange for three months in the Balkans.

Robbins, 41, of Goldsboro, N.C., seemed the unlikeliest of crash victims. He had flown Army helicopters since 1986 and was the company&#8217;s standardization and instructor pilot &#8212; its mentor, really.

McNulty said Robbins was quiet and low-key, with a dry sense of humor that earned him the nickname &#8220;Eeyore,&#8221; after the gloomy character in &#8220;Winnie-the-Pooh.&#8221; Robbins&#8217; co-pilot wasn&#8217;t well-known even to the pilots in his company, having joined the 1/1 Aviation just before the unit left for Kosovo. DeSouza, 29, of Lake Worth, Fla., was born in Jamaica but moved to New York as a child. He got his private pilot&#8217;s license shortly after graduating from high school in Parkland, Fla., where he was the school&#8217;s first homecoming king, according to the South Florida Sun-Sentinel newspaper.

DeSouza joined the Marines in 1993 and served five years. Lured by the prospect of becoming a combat helicopter pilot, he joined the Army, the newspaper reported. He had finished flight school and qualified in the Apache not long before arriving in Germany. His wife, Andrea, and year-old son, Devon Jr., stayed in Florida near his family and never moved to Germany.

Before returning from their Kosovo tour late last month, the 1/1 Aviation pilots renamed the airfield at Camp Bondsteel in memory of Robbins and DeSouza. They flew home to Katterbach July 24 and flew a missing-man formation over the airport there before landing and greeting loved ones.