Homebound 1st Brigade is welcomed back to Germany from Iraq 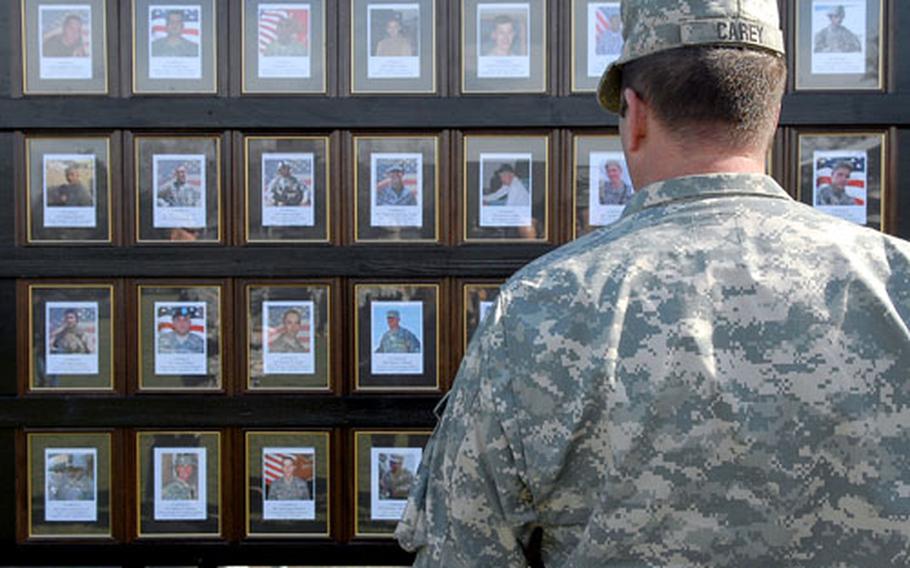 Most of the brigade&#8217;s soldiers returned last month from an almost 14-month deployment to Iraq, though about 100 &#8220;Ready First&#8221; soldiers are still in Kuwait and should be back this week. The brigade is scheduled to be out of Germany before the end of the year.

MacFarland drew on the U.S. Army&#8217;s presence in Germany to draw a parallel to his unit&#8217;s experiences in Iraq.

&#8220;The German-American bond forged after the second world war has been one of the most successful alliances in history,&#8221; he said.

&#8220;And it has not gone unnoticed by the leader of the Sunni anti-terrorist tribal movement in Iraq, Sheik Abdul Sattar Buzaigh al-Rishaw. He has often told me he would like Iraq to be like Germany someday, with American bases, with peace and prosperity.&#8221;

To a large extent, the Ready First helped put Iraq&#8217;s Anbar province on track to achieve that vision, MacFarland suggested during his speech.

&#8220;I think we can honestly say that we did indeed fix Ramadi. What was once an enemy safe haven without a police force or government and where insurgents openly roamed the streets is now a recovering city with thousands of police, a mayor and the beginnings of an economic revival,&#8221; he said.

But, he said, that progress wasn&#8217;t without cost. In about nine months in Ramadi, 94 of the troops he commanded &#8212; including Marines, sailors and soldiers &#8212; died in the fight to save the city from Sunni extremists and al-Qaida terrorists.

Few know the cost as well as Cynthia DesLauriers, mother of Sgt. Mark Vecchione, a member of the 1st Battalion, 37th Armor Regiment who was killed in Ramadi.

DesLauriers came from Eastham, Mass., to attend the ceremony. She was one of about a dozen family members who got to her feet when Maj. Gen. Doug Robinson Jr., in his remarks, asked family members who&#8217;d lost soldiers in Iraq to stand up.

Spc. Mario Turner, a member of Company C, 16th Engineer Battalion who was shot in the leg during a mission in Ramadi, knows that cost as well.

He would rather have been with his comrades as they stood in formation and paraded off the field than in the bleachers, but he still needs a cane to get around. He knows that, despite his injury, he&#8217;s one of the lucky ones.

Turner was among the hundreds of Ready First troops who earned awards for their actions and injuries in Iraq.

More than 2,000 soldiers, Marines and sailors under Ready First command earned Combat Action badges, Combat Infantryman badges and Combat Medic badges for personally engaging the enemy in combat, MacFarland said. More than 500 other awards were earned for valor, and more than 600 troops were awarded the Purple Heart for injuries they sustained.

Country musician Chely Wright, who just left Iraq, entertained crowd members as they ate burgers and bratwurst and drank beer under tents set up in a motor pool.

She didn&#8217;t come to Germany to force country music on the troops, she joked.

See a slideshow of photos from the 1st BCT&#39;s homecoming here.