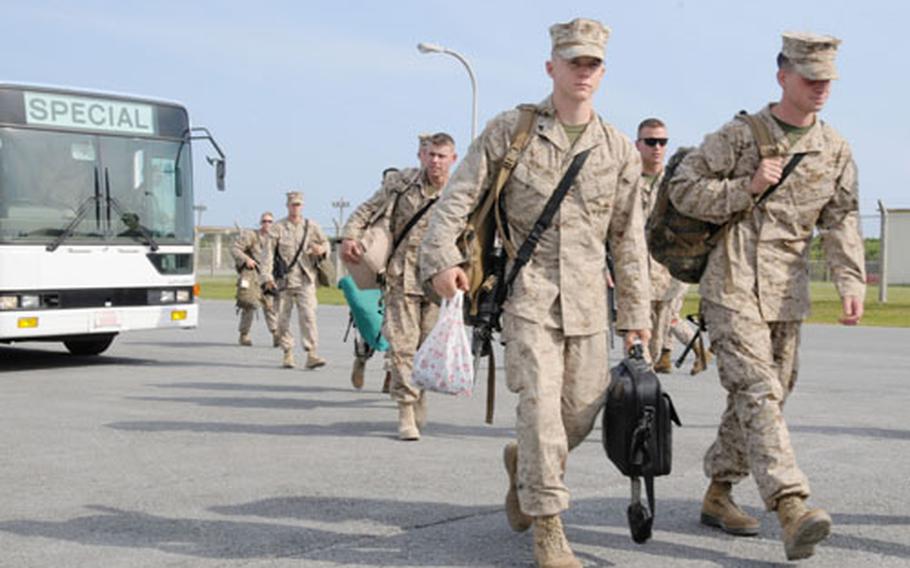 About 75 servicemembers from 3rd Marine Division, most with Camp Schwab’s Combat Assualt Battalion, arrive Friday at Kadena Air Base, Okinawa, after a seven-month deployment to Anbar province, Iraq. (Cindy Fisher/S&S)

KADENA AIR BASE, Okinawa&#8212;About 75 troops from the 3rd Marine Division returned Friday morning from a seven-month deployment to Iraq.

The returning troops departed Okinawa in October for pre-deployment training at Twentynine Palms, Calif., and arrived in Iraq in February.

For the battalion&#8217;s engineers, the deployment focused on force protection &#8212; from building barriers and monitoring traffic control points to working with the Iraqi army, said Staff Sgt. James Peebles.

The engineer company also helped the Iraqi army build two medical clinics. "It showed they were taking control of their country and progressing forward," Peebles said.

There were many late nights and long hours for the battalion&#8217;s truck company, said Staff Sgt. Jesus Longoria.

He said the unit completed more than 100 convoys, "which is pretty good because everyone came back." This was the first deployment for most in the group, both staff sergeants said.

"Most had never been anywhere," Peebles said. "We got them fresh out of school. ... [But they] performed beyond my expectations."

Cpl. Richard Lemus, 23, a wrecker operator, said being in Iraq took some adjusting.

Col. Tom Connally, Headquarters Battalion, 3rd Marine Division, greeted the Marines upon their arrival to Kadena and urged them to take it easy for the next few days and adjust back to garrison life.

Light said his big plan is to just relax.