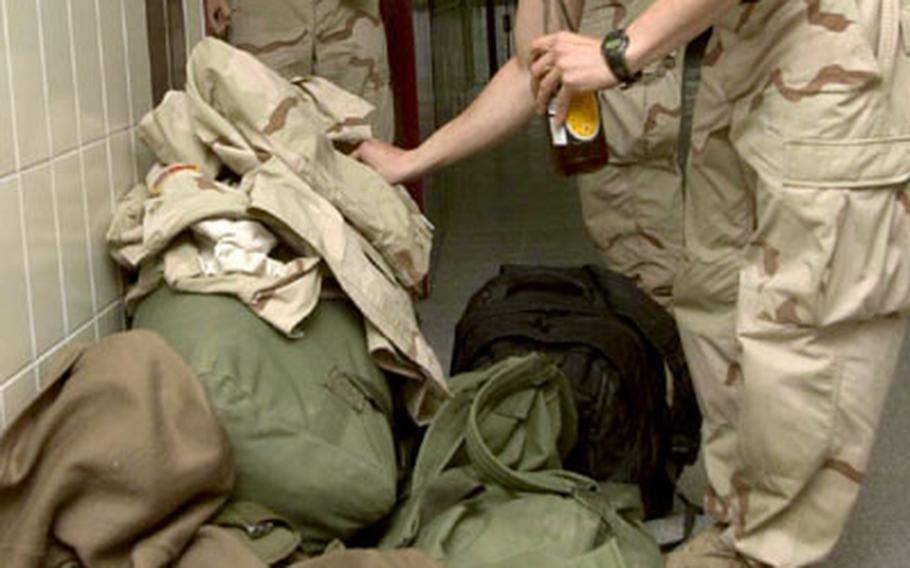 For single soldiers returning to Europe from the Middle East, “welcome home” means returning to the barracks with family still far away. (Jon R. Anderson / S&S)

HEIDELBERG, Germany &#8212; The war- and travel-weary soldiers filed off the chartered bus to the joyful screams of wives and open-armed children running for hugs a year gone missing.

But for many of the 68 soldiers who returned Friday to Heidelberg, Germany, home is still a long way away.

&#8220;Will you hold my hand,&#8221; whispered a sergeant in Pfc. Cody Sheldon&#8217;s ear as Alpha&#8217;s commander stood before the troops for one last formation with tearful flag-waving wives and children standing on the sidelines.

Sheldon said he&#8217;s planning to surprise his parents when he heads home on leave in a few days.

As the married soldiers drive away with spouses and children, Sheldon and the other single soldiers still have some work to do.

Like many units, Alpha left for Iraq in a hurry. Personal belongings in the barracks &#8212; everything from clothes and TVs to snowboards and cell phones &#8212; were boxed up and put into storage after they left.

Moving into newly renovated barracks, the single soldiers have to wait in the halls as a sergeant works her way room-by-room to sign over their keys and boxes of personal items.

Unit leaders have left a loaf of bread and a small bag of groceries in each room for the new arrivals.

The rooms and food are small compensation, though, for many of the young soldiers. Under the Army&#8217;s &#8220;reintegration&#8221; program, it will be at least seven days before any of these soldiers will be allowed to sign off on leave and fly home to the States.

It wasn&#8217;t not all glum faces, though. Far from it. While still far from home, everyone was clearly glad to be out of Iraq.

Spontaneous bear hugs were exchanged as random hoots of delight echoed through the barracks as soldiers sifted through their boxes.

Outside in the hallway, a party had already erupted. Three hours to go until noon, Spc. Gregory Dulin was cracking open beers for his buddies.

With rucksacks and gear still splayed next to doors, the soldiers were already telling war stories and remember-whens.

HEIDELBERG, Germany &#8212; Single soldiers returning from Iraq could be forgiven for wondering where leaders are going to put everyone.

According to Russ Hall, head of the Army&#8217;s Installation Management Agency, in many cases units are leaving the Middle East as much as 42 percent over-strength. That&#8217;s because of &#8220;stop loss&#8221; and &#8220;stop movement&#8221; levies put on units that prevented soldiers from ending their contracts or moving to new assignments while deployed in the combat zone.

New troops, however, have continued to arrive in those units.

While married soldiers always have the option of living off base, Hall said he&#8217;s looking in every place possible to house the single troops.

&#8220;I have given authorization to all the base support battalions to lease housing downtown,&#8221; said Hall. Officials are looking at using hotels and spare on-base family housing units to take up the slack until unit levels stabilize.

IMA declined to provide an official to address specifics on the barracks crunch.

Spokeswoman Millie Waters said IMA officials are not clear on many of the details and were still working with local commands to assess the magnitude of the problem and how long the soldiers should expect to be in temporary lodging.