Home-front connection: A blessing or a burden? 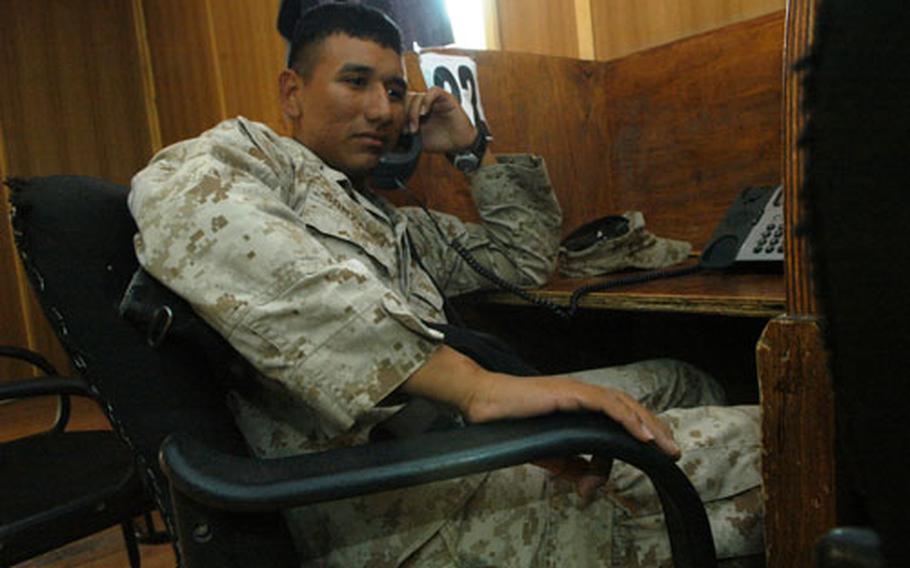 FALLUJAH, Iraq &#8212; Staff Sgt. Shannon Garstka blames the Internet for helping to disconnect his marriage while he was in Iraq.

It started when an old female friend turned up on his MySpace page &#8212; Garstka&#8217;s online social networking system of choice during his current deployment &#8212; and his wife didn&#8217;t like that she was there.

Misunderstanding turned into jealousy, and it went downhill from there, Garstka said.

It&#8217;s not all MySpace&#8217;s fault, Garstka said. The incident, compounded by the fact they weren&#8217;t communicating face-to-face, only brought to light deeper problems of trust and insecurity within the relationship, he said.

He has no problems with the other 80 people on his network.

Pvt. Alma Cotto, a supply clerk from Charlotte, N.C., is in Iraq working for the 3rd Brigade Support Battalion. The 27-year-old is married with a 3-year-old and says she calls or e-mails home every day.

Much of the time is spent reassuring her husband that she is not in danger, she said.

With satellite phones and Internet cafes in some of the dustiest command outposts, communicating with the home front can be easy. Servicemembers can get in touch with their loved ones once a week, if not once a day. But it&#8217;s a blessing and a curse.

It&#8217;s a blessing to Spc. April Carmichael. Her husband keeps her in the loop by e-mailing her their children&#8217;s school projects and grades while she spends 15 months as a physical therapist at 3rd Brigade Support Battalion in Ramadi.

But while the Internet allows more access to friends and family back home, hearing about the day-to-day problems can also put stress on soldiers, said Maj. Christopher Warner, the division psychiatrist and deputy division surgeon for Task Force Marne in Baghdad.

&#8220;Many of our soldiers either want to stay engaged and try and fix (the problems) themselves or may have spouses that expect them to fix them,&#8221; Warner said in an e-mail. &#8220;Either way, it can be very difficult and can increase the stress for both.&#8221;

Warner helped author a 2005 study published in last month&#8217;s issue of Military Medicine that said issues like family, financial and legal problems outrank actual combat exposure when it comes to what&#8217;s worrying most soldiers in Iraq.

Task Force Baghdad also had five suicides during the deployment, most of them junior-enlisted Caucasian men under the age of 30 suffering from home-front and marital stresses during their first deployment.

Home-front issues accounted for 35 percent of the 22,000 contacts that combat-stress specialists had with Baghdad soldiers in 2005. This was compared with 22 percent for combat exposure and 15 percent for peer/unit issues.

&#8220;In comparison with most past wars, soldiers had greater availability of communication with their families through telephone, electronic mail, and even video sessions on the Internet. Increased connectivity helped decrease some of the stress from separation but at times increased the stress for both the soldier and the family when problems/situations arose on either end,&#8221; the study says.

Capt. Glen Wurglitz sees this as a psychologist with the 785th Medical Group in Balad.

In Warner&#8217;s experience, deployed soldiers and families do well at first but hit a bump around 90 to 120 days. Major stress is felt at the sixth month and increases each month afterwards, Warner said.

That fell in line with the experience of Cpl. Tarron Skipper, with the 3rd Battalion, 3rd Marines, on his last deployment.