Home for holidays, but ready to fight 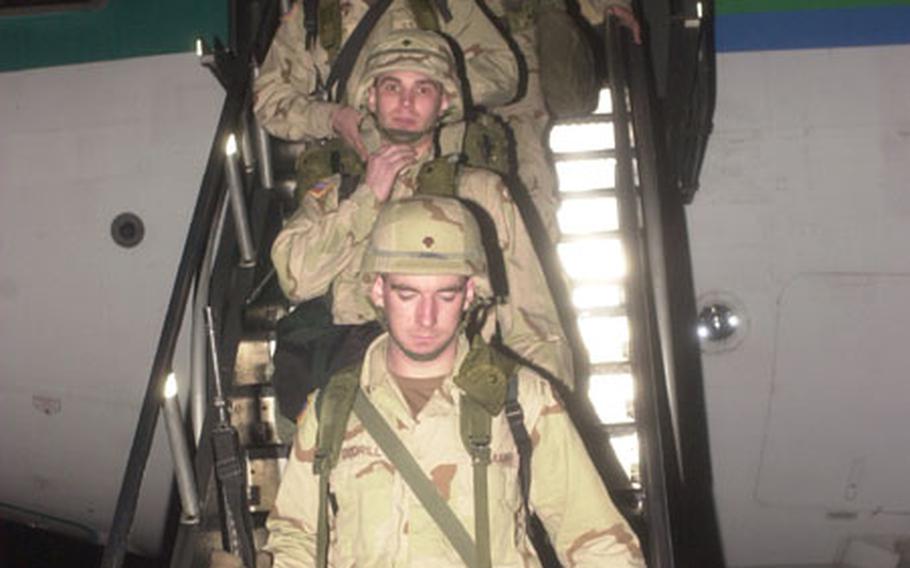 RAMSTEIN AIR BASE, Germany &#8212; Even as war drums were beating louder around Iraq, the last of some 600 V Corps soldiers quietly returned to Germany from desert bases in Kuwait over the weekend.

They&#8217;re glad to be home for the holiday, but the soldiers could find themselves doing an about-face within weeks if not days.

Top White House and U.N. officials have declared Iraq&#8217;s U.N.-mandated declaration on weapons programs incomplete, and the Pentagon has signaled it is preparing for a mass mobilization of reservists.

All this comes as President Bush canceled plans to visit Africa next month and prepared to order an additional 50,000 troops into the Middle East, according to reports.

Bleary-eyed from their long flight but clearly glad to be home in time from the holidays, the last wave of troops arrived at Ramstein Air Base on Saturday night under dark misty skies and a light drizzle.

The low-key, unceremonious return underscored for many of the troops that this is all-too-likely just a temporary reprieve from desert duty. More than 100 soldiers remained behind in Kuwait &#8212; tasked with keeping the corps command post up and running.

The contingent had been in Kuwait over the past month, preparing for and participating in a top-level war game dubbed Internal Look, which was designed to test communications and rehearse battle plans should the Pentagon get the green light to remove Saddam Hussein from power.

With a 1st Infantry Division combat patch sewn on his desert camouflage uniform, Engler said he hopes to &#8220;finish the job we started 12 years ago.&#8221;

He remembers sitting with his long-range reconnaissance unit inside Iraq on Feb. 27, 1991, as then-President George Bush announced an end of the Persian Gulf War.

If the saber rattling in Washington is any judge, that chance may be just over the horizon and is likely to involve nearly all of the Army&#8217;s forces in Europe.

In addition to Wallace&#8217;s staff deploying for Internal Look, the contingent also included soldiers from nearly all of the corps&#8217; major commands, including both of its two divisions as well as the 11th Aviation Brigade, 130th Engineer Brigade, 18th MP Brigade, 205th Military Intelligence Brigade, among others.

V Corps joined the 1st Marine Expeditionary Force in Kuwait for the war games. The two three-star commands are expected to lead whatever ground combat units are mustered for an invasion of Iraq.