Holocaust survivor: Soldiers ‘don’t risk their life for nothing’ 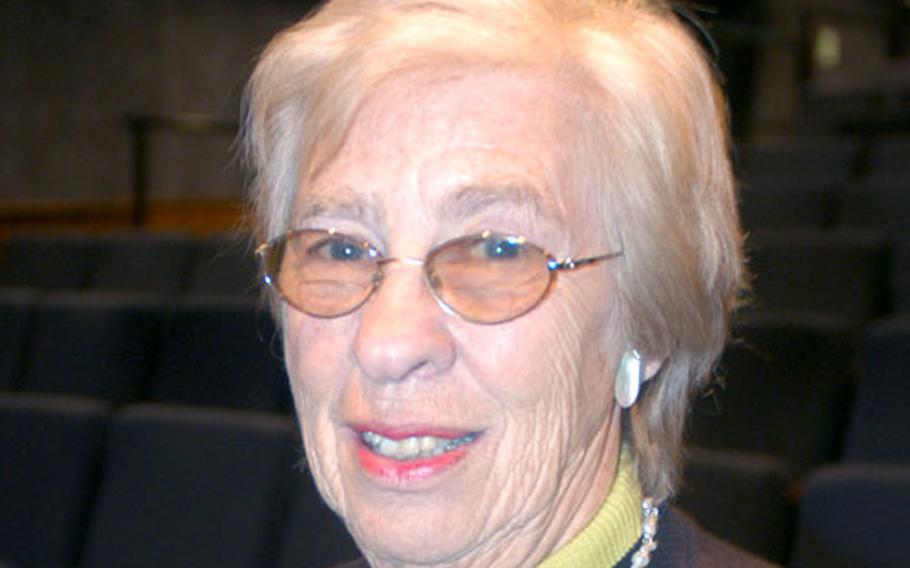 Eva Schloss, a Holocaust survivor and friend of Anne Frank, was at Stuttgart’s Kelley Theater on Friday for a production of "And Then They Came for Me," based largely on her experiences during World War II. (Charlie Coon / S&S)

Maybe they&#8217;re fighting to prevent a bad situation from getting worse, according to Eva Schloss.

&#8220;There would have been a very short war with perhaps very little casualties. Perhaps now as well, one has to go in at an early stage and help the people who are being murdered for no reason at all.&#8221;

Schloss was a friend of Anne Frank, and the two were taken prisoner by the Nazis in August 1944. Anne died at age 15 while imprisoned at the Bergen-Belsen concentration camp. A diary she kept while her family was hiding in Amsterdam was found after the war, and has been used for movies and productions.

Schloss survived. So did Ed Silverberg, who was briefly Anne&#8217;s boyfriend before her family went into hiding and he escaped to Belgium.

Their recollections are featured in the multimedia production being presented at the Kelley Theater. It involves live actors, videotaped interviews and historic newsreels.

Schloss was in San Francisco when the war in Iraq began and was asked to participate in anti-war demonstrations there.

Schloss, 76, who lives in London and was invited by the theater company to attend its production, said it&#8217;s a difficult decision for the U.S. to act as the peacekeeper of the world. But perhaps the troops in Iraq prevented Saddam Hussein&#8217;s regime from committing further atrocities.

&#8220;For soldiers, I think it is important to see that they don&#8217;t risk their life for nothing,&#8221; Schloss said. &#8220;You know people are desperate for help of the people who fight for the freedom of people who are suppressed.