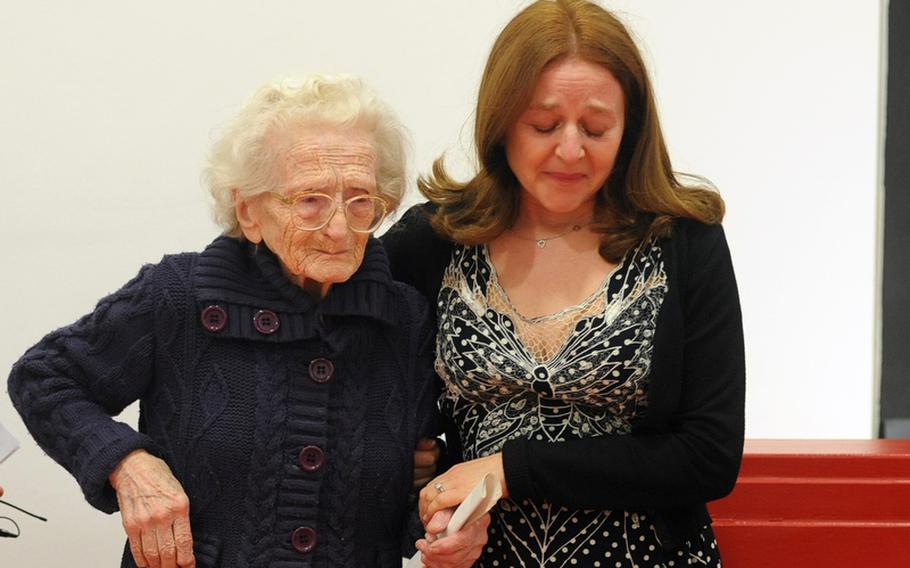 Buy Photo
Eva Iszak Djordjevic is led off the stage by her daughter Valerija Isak-Jarmus, after telling the moving story of how she survived the Holocaust in Nazi concentration camps at a ''Days of Remembrance'' observance in Heidelberg, Thursday. (Michael Abrams/Stars and Stripes)

Buy Photo
Eva Iszak Djordjevic is led off the stage by her daughter Valerija Isak-Jarmus, after telling the moving story of how she survived the Holocaust in Nazi concentration camps at a ''Days of Remembrance'' observance in Heidelberg, Thursday. (Michael Abrams/Stars and Stripes) 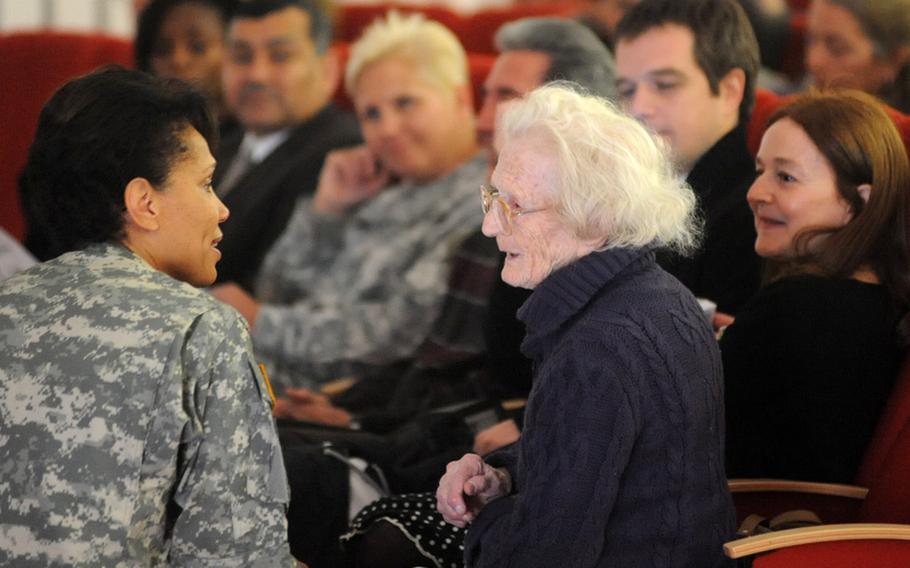 Buy Photo
Brig. Gen. Nadja West, commander of the Europe Regional Medical Command, talks to Eva Iszak Djordjevic before the start of the ''Days of Remembrance'' observance in Heidelberg, Germany, Thursday. Djordjevic, a Holocaust survivor, was the guest speaker. (Michael Abrams/Stars and Stripes) 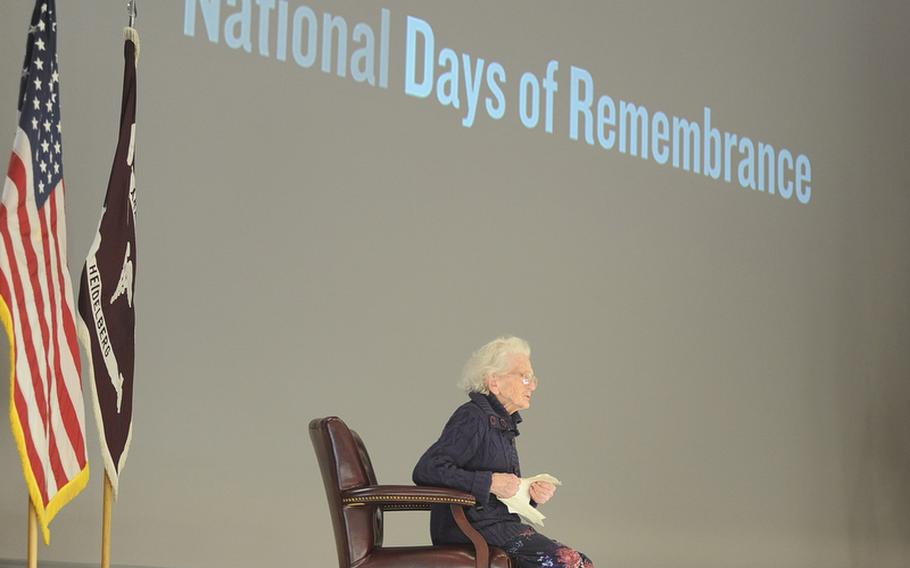 Buy Photo
Holocaust survivor Eva Iszak Djordjevic tells the moving story of her survival during the Holocaust at a ''Days of Remembrance'' observance in Heidelberg Thursday. (Michael Abrams/Stars and Stripes) 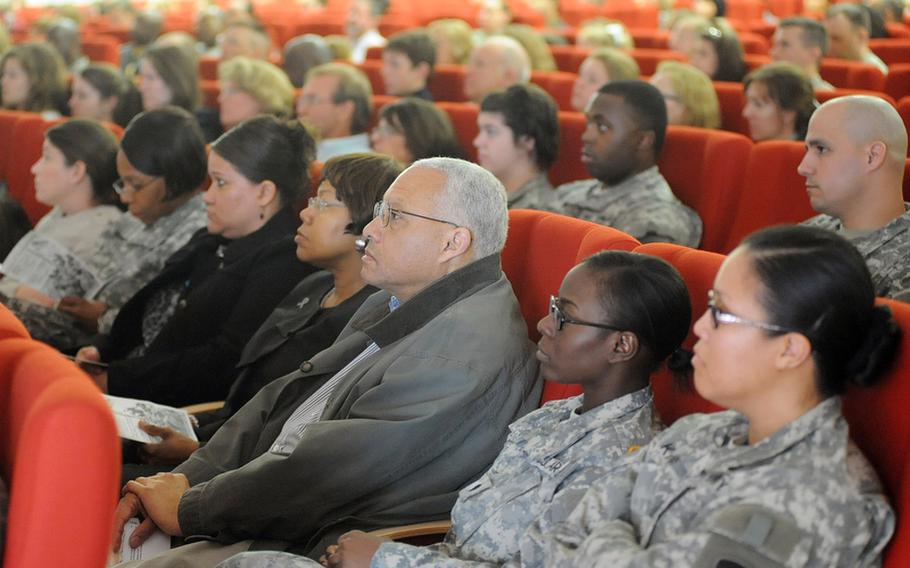 Buy Photo
Attendees at the ''Days of Remembrance'' observance in Heidelberg, Germany, listen to guest speaker Eva Iszak Djordjevic tell the story of her survival in Nazi concentration camps during the Holocaust. (Michael Abrams/Stars and Stripes) 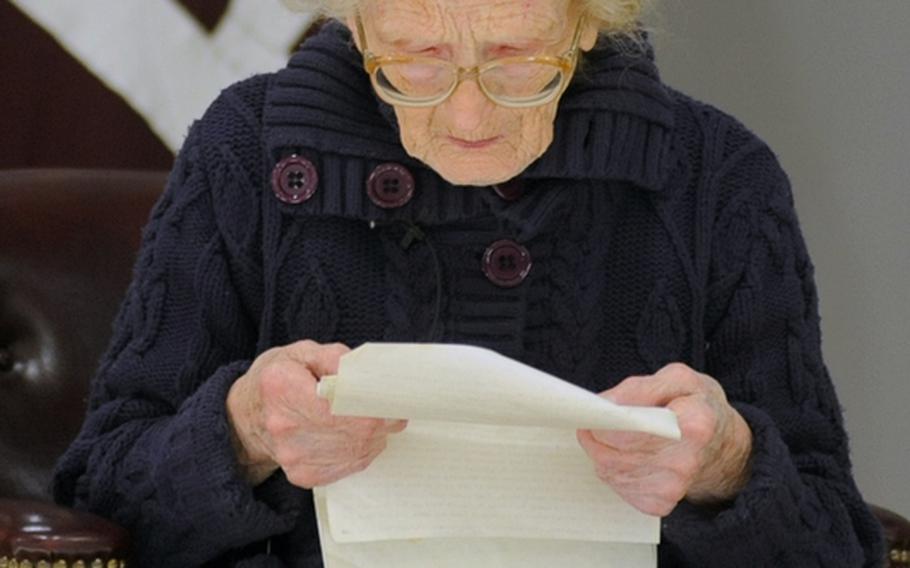 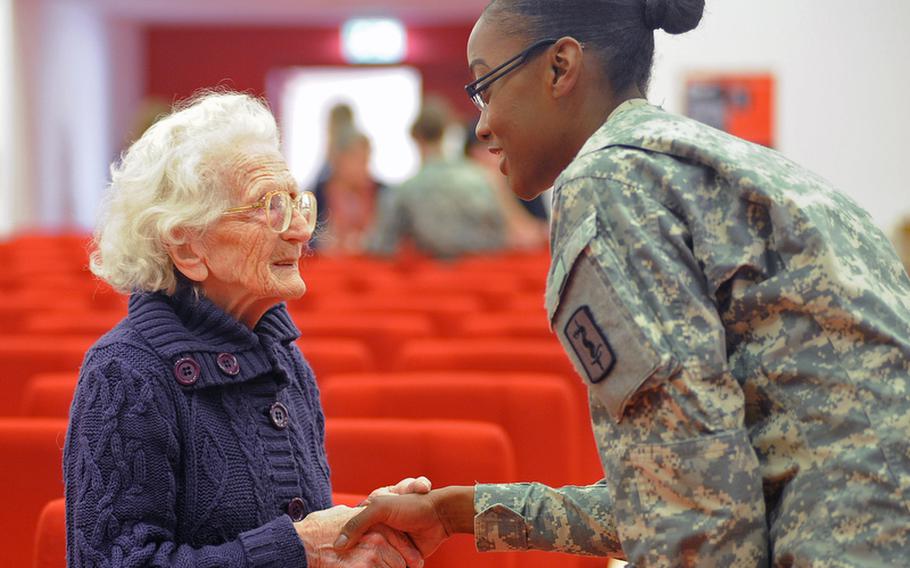 Buy Photo
Eva Iszak Djordjevic talks to Spc. Evelyn Edwards following the ''Days of Remembrance'' observance in Heidelberg Thursday. Djordjevic, a Holocaust survivor, was the guest speaker at the event. Edwards is with the 64th Medical Detatchment in Heidelberg. (Michael Abrams/Stars and Stripes) 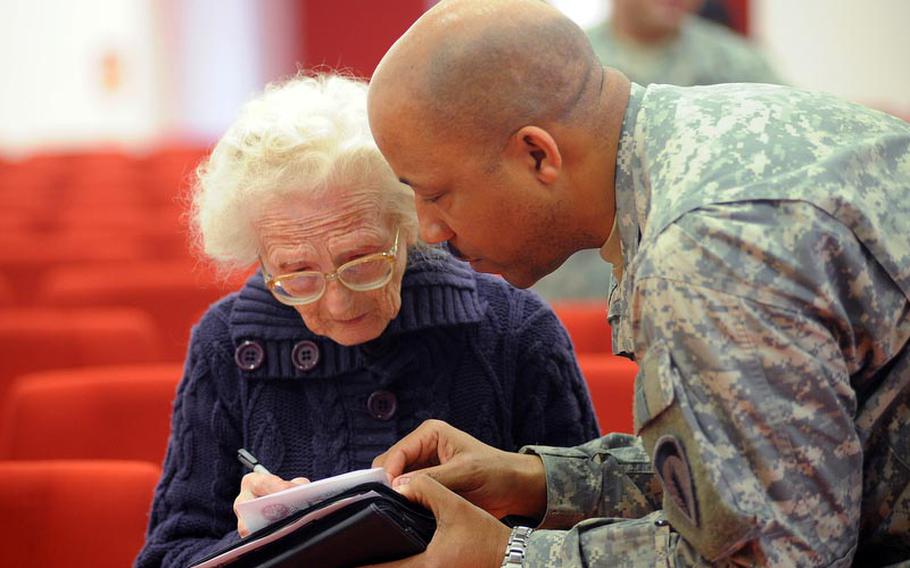 Buy Photo
Master Sgt. Mark Jordan has his program autographed by Eva Iszak Djordjevic, the guest speaker at the ''Days of Remembrance'' observance in Heidelberg Thursday. Djordjevic is a Holocaust survivor. Jordan, of the U.S. Army Europe Equal Opportunity Office was the master of ceremonies at the event. (Michael Abrams/Stars and Stripes)

HEIDELBERG, Germany &mdash; She was just 14 when her father was taken and murdered, and she fled across the Yugoslav border and into hiding in Hungary.

She was 16 when Hungarian police rounded her up in Budapest in October 1944, along with her mother, aunt and others, and forced them to march for a month through the cold and rain to the Austrian border. From there, they were handed over to the Nazis.

Days later, she was transported by train to Ravensbr&uuml;ck, and later sent on to Dachau, two of the German Reich&rsquo;s concentration and death camps, where millions starved, suffered unimaginably and died.

&ldquo;The fear every day &mdash; it was so awful,&rdquo; said Dr. Eva Iszak Djordjevic. &ldquo;It is a very sad story, but it must always, always be repeated. So people will know not to hate.&rdquo;

Now 84, Djordjevic repeated her story of loss, terror, humiliation and suffering &mdash; but also of endurance and survival &mdash; to an audience of about 220 U.S. soldiers and civilians in a theater Thursday on Nachrichten Kaserne in Heidelberg.

Accompanied by a grandson and daughter, it was the retired physician&rsquo;s first visit to Germany since she was liberated from a Dachau subcamp by U.S. soldiers in 1945, restored to health and returned to her home in Belgrade, now capital of Serbia.

But her suffering and years of terror, like that of most European Jews, began years before, when the Nazis and other fascist governments began disenfranchising, then rounding up, then killing them.

Her talk was sponsored by the Europe Regional Medical Command, for which her son-in-law works as a clinical social worker. It was part of the Days of Remembrance, an annual, weeklong commemoration of the Holocaust in which 6 million Jews, as well as Gypsies, disabled people, homosexuals and political enemies &mdash; perished in state-sponsored, systematic, race-based torture and mass murder.

The theme of this year&rsquo;s commemoration was &ldquo;Choosing to Act; Stories of Rescue.&rdquo; Master Sgt. Mark Jordan, of U.S. Army Europe&rsquo;s equal opportunity office, told the audience, &ldquo;We have to choose to take a stand against persecution.&rdquo;

The small, fragile Djordjevic walked up the stairs onto the stage after a video about the Holocaust from the Holocaust Memorial Museum. She sat in a chair holding her notes and matter-of-factly told her story.

At Ravensbr&uuml;ck, the Reich&rsquo;s largest concentration camp for women, north of Berlin, each terrible day began at 4 a.m., she said. &ldquo;From 4 to 8 a.m., standing on the Appell Platz (square where the roll calls were held), with the temperature below zero, being beaten with leather belts.

&ldquo;At 8 a.m., exhausted and frozen, with a cup of black water they called coffee and a thin piece of bread made of a mixture of flour and scrapings of wood, we were pressed to work outside &hellip; We saw every day a lot of corpses.&rdquo;

Later, she was sent in an open wagon to a Dachau subcamp, near Munich, that used slave laborers to make munitions. But by then &mdash; March 1945 &mdash; she and the other women were too sick, starved and weak to work. &ldquo;We were living corpses,&rdquo; she said.

Despite the life she made for herself after the war &mdash; a long career and marriage to a prominent psychologist, three daughters and two grandchildren, she could never forget, she told her rapt audience.

&ldquo;I started a new life. But a scar persists in my soul and body,&rdquo; she said.

&ldquo;The loss of my home, the loss of my father, so many relatives and friends, the humiliation and tortures &hellip;&rdquo;

Djordjevic began to weep. So did her daughter. So did the soldiers and civilians in the audience.

&ldquo;Wow,&rdquo; said Col. Talida Crosland, commander of Heidelberg Medical Department Activity (HMEDDAC), as she took the microphone to make her own closing remarks but found she could barely speak.

Other soldiers reacted the same way.

&ldquo;I knew about (the Holocaust),&rdquo; said a wet-eyed Sgt. 1st Class Veronica Pippers. &ldquo;But to hear somebody actually talk about it ... She made it, and she&rsquo;s still struggling.&rdquo;

Capt. Jose Real, the chief of operations and security for the HMEDDAC, said Djordjevic&rsquo;s experience put his own major problem &mdash; 17 years in the Army and resulting fatigue &mdash; into perspective. &ldquo;It didn&rsquo;t seem too bad after today,&rdquo; he said.

Real moved for cover to the back of the theater as Djordjevic ended her talk. &ldquo;Nobody wants to see the chief of security bawling up,&rdquo; he said.

Afterward, Djordjevic was given a unit coin, a plaque and a bouquet of flowers. Dozens lined up to thank her, whisper in her ear or hug her.

&ldquo;I was very surprised and very flattered that so many people came,&rdquo; she said, after her well-wishers departed. She sat down for an interview, fishing creased, age-yellowed documents out of her capacious handbag, including her old U.S. military government pass for displaced persons, signed by one Lt. Nesbit Pinnon.

She was still grateful to the U.S. Army, she said, whose soldiers had shown up in her camp after increasingly louder and closer shelling. &ldquo;I never forget it,&rdquo; she said. &ldquo;It was 27 April 1945.&rdquo;

That morning, she&rsquo;d woken in her lice-infested straw, sick from typhoid fever, near starvation, to a male prisoner&rsquo;s voice. &ldquo;&lsquo;Women: wake up! There are no guards, no Nazis!&rsquo; I looked everywhere! We are free!&rdquo;

That afternoon, three or four Jeeps appeared in the yard, and the American soldiers jumped out. &ldquo;They wore nice uniforms,&rdquo; she said. &ldquo;I remember they all had silk scarves. They gave us chocolate and tins of food.

&ldquo;They were also terrified when they saw us, how we looked. They got some German guards and made them prepare food for us.&rdquo;

On April 26, 1945, as American forces approached, there were 67,665 registered prisoners in Dachau and its subcamps, according to the Holocaust Memorial Museum. &ldquo;Starting that day, the Germans forced more than 7,000 prisoners, mostly Jews, on a death march from Dachau to the south. During the death march, the Germans shot anyone who could no longer continue; many also died of hunger, cold, or exhaustion,&rdquo; according to the museum.

When American forces liberated Dachau&rsquo;s main camp on April 29, they found more than 30 railroad cars filled with bodies, according to the museum.

Djordjevic&rsquo;s daughter said she wasn&rsquo;t sure if her mother should return to Germany for the talk. &ldquo;I was so afraid for her to come. It&rsquo;s so emotional,&rdquo; said Valerija Isak-Jarmus.

&ldquo;But she&rsquo;s the winner,&rdquo; Isak-Jarmus said, looking at the line of people waiting to talk to her mother. &ldquo;You know? She&rsquo;s coming back to Germany and getting all this.&rdquo;