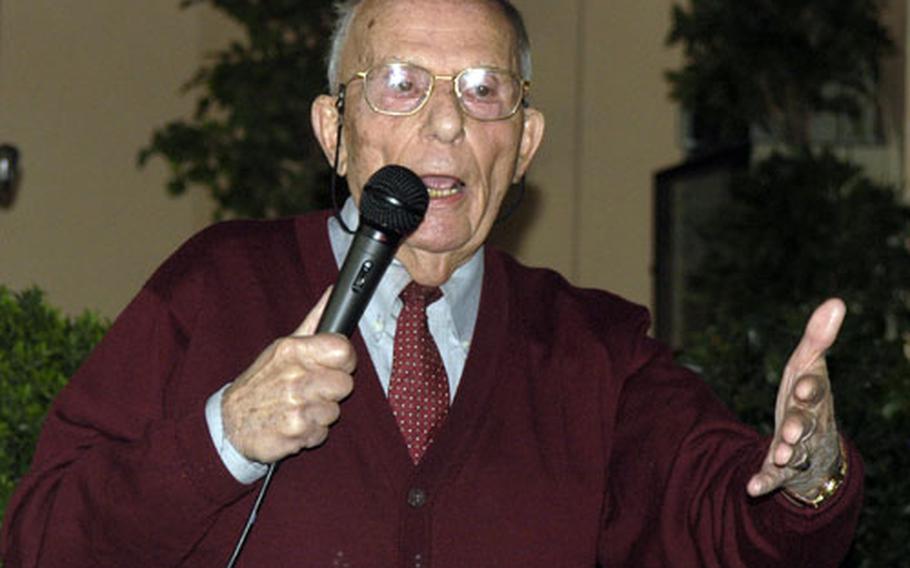 Bob Behr, a Holocaust survivor and former U.S. Army soldier, talks to a group at the U.S. Army Garrison, Stuttgart about his experiences in Germany during World War II. Behr was forced to work at labor camp during the war, but managed to survive. Today, he volunteers at the United States Holocaust Memorial Museum in Washington. (John Vandiver / S&S)

STUTTGART, Germany &#8212; In 1947, Bob Behr was back in Berlin, the city of his birth. It was an unlikely place for a Holocaust survivor to want to revisit.

A few years earlier, he and his mother were arrested there by the Gestapo and transported to a ghetto where they endured deprivation and abuse.

Behr and his mother managed to survive their time at Theresienstadt, and after the Soviets liberated the camp in 1945, Behr immigrated to the United States. He eventually enlisted in the U.S. Army, which brought him back to Berlin.

"I wasn&#8217;t worried about coming back. Not at all. I was in an American Army uniform. We were kings in the streets," he said.

This time around the tables had turned. Behr was in Berlin to put his German language skills to use, hunting ex-Nazis.

During his speech Behr talked about what the Army meant for him after those years when his life hung in the balance. "The structure felt like a warm coat," he said.

But during his talk, Behr also recalled the dark days when Adolf Hitler first burst on the scene.

He recalled the first time he heard Hitler&#8217;s voice over the radio, railing against the Jews. The Behr family dismissed the up-and-coming politician as a crazy person. Surely the Germans wouldn&#8217;t support such a man.

But then Hitler came to power and everything changed. Behr was kicked out of school, yellow stars began appearing on coats and propaganda lined the street, spouting vile messages.

During his time at a labor camp, Behr was forced to clean trees when supplies ran out for construction projects. It was an impossible job. If any dirt was found on the branches, the workers were forced to sleep outside and not allowed to use the bathroom. Urine froze against their legs during the night, Behr said.

Behr, 87, now lives in the Washington, D.C., area and volunteers at the United States Holocaust Memorial Museum in Washington.

He told the audience that the dangers of intolerance and the crimes that come from hate must always be remembered.

When asked by an audience member what young Jewish people should make of the Germans of today, Behr said the current generation shouldn&#8217;t be held responsible for the sins of their grandfathers.