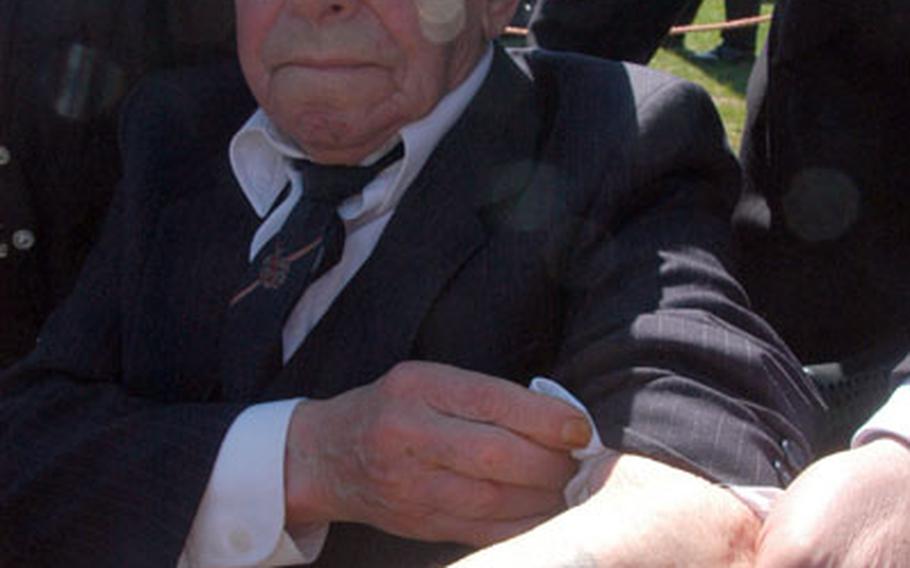 Benjamin Gelhorn shows a tattoo of the number 142906, which was burned into his arm during World War II at the concentration camp in Auschwitz, Poland. Gelhorn was attending a ceremony for the placing of gravestones at Stuttgart Army Airfield in Germany, where the remains of 34 Holocaust victims were found in September 2005. (Charlie Coon / S&S)

ECHTERDINGEN, Germany -- Benjamin Gelhorn had two parents, five siblings and many relatives, but most died in the Holocaust. Only three family members survived the imprisonments and killings.

Gelhorn, 86, was one of about 200 people who gathered Sunday at Stuttgart Army Airfield to mark the placing of gravestones for 34 Holocaust victims.

The victims&#8217; remains, mostly bones, were found in September 2005 near the main security gate at the airfield. After the remains were exhumed, and after months of negotiation, the bodies were reburied in December 2005. The gravestones were placed earlier this month.

Sunday was Holocaust Remembrance Day or Yom Hashoah, a Jewish holiday marking the killing of 6 million people under the Nazi regime before and during World War II.

Gelhorn, of Munich, said he was imprisoned in seven Nazi labor and concentration camps. He got his tattoo at the Auschwitz camp in Poland. He was joined at the ceremony by his cousin, Anette Ruetter, and Reutter&#8217;s 11-year-old daughter, Lea, part of a family tree that had to grow fresh roots.

The spectators gathered in a semicircle around the 34 rectangular, black granite gravestones, placed in rows where the bodies had been found.

The gravestones were surrounded by a garden of white pebbles, which was encircled by green grass and a metal fence.

The bodies were found 17 months earlier by contractors who were excavating near the airfield&#8217;s main security gate as part of a drainage project.

German police were required to treat the scene as a mass murder and exhume the bodies to check for evidence, and possibly identify the remains using DNA analysis. But Jewish custom required the bodies be undisturbed.

Officials determined the bodies were of Holocaust victims by their age and the bodies&#8217; location at a known forced-labor camp.

The bodies were transported and stored at Robert Bosch Hospital in Stuttgart before being re-interred at the airfield nearly three months later.

&#8220;We had very little to do with it except for giving assistance to both sides,&#8221; said Stephen Cochrane, U.S. forces liaison officer for Baden-W&#252;rttemburg, the German state of which Stuttgart is the capital.

Lea Ruetter&#8217;s mother, Anette Reutter of Karlruhe, when asked if remembering the Holocaust was important, pointed to the recent eulogy given by Guenther Oettinger, the governor of Baden-W&#252;rttemburg, who called a former Nazi judge an &#8220;opponent of the Nazi regime.&#8221;

Critics said Oettinger was trying to rewrite history; he later called his statement a misunderstanding.