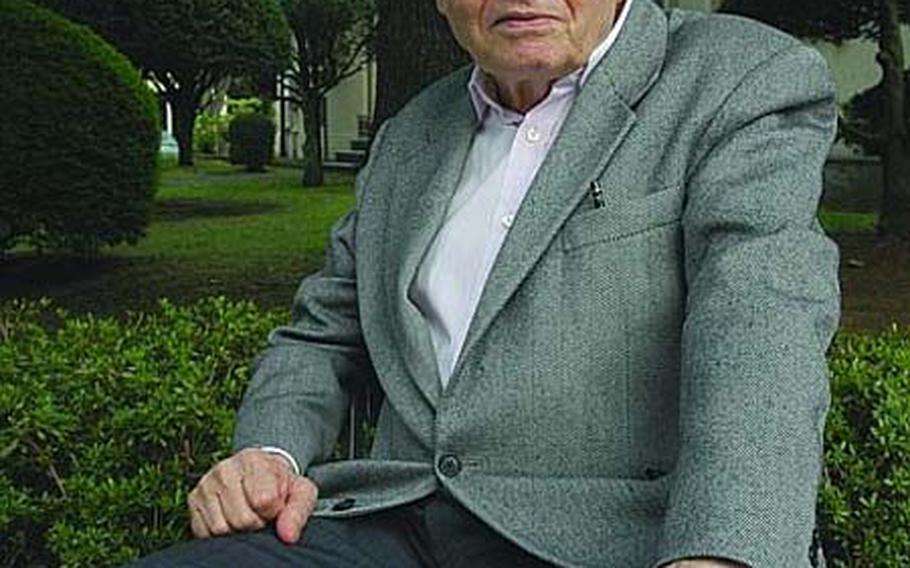 Bernard Krisher, seated outside the Yokota Air Base Chapelon Wednesday, fled Germany with his family in 1937. He spoke to members of the Yokota community as part of a Holocaust Remembrance Day service. (Bryce S. Dubee / S&S)

YOKOTA AIR BASE, Japan &#8212; Bernard Krisher was a Jewish child growing up in 1930s Germany before he and his family fled Europe near the end of the decade.

"But for the grace of God, I was saved from the Holocaust," he said, addressing those gathered Wednesday at the Yokota West Chapel for a Holocaust Remembrance Day service.

While reflecting on the memories of his youth in Germany, Krisher described the prejudice of the time, using an example.

"I remember going grocery shopping with my mother and being told to wait to be [served]," he said.

For more than an hour, they would wait patiently, he recalled, before they were finally helped.

By 1937, his father, who owned a fur store, "saw the handwriting on the wall," Krisher said. So the Krisher family, along with 6-year-old Bernard, went on "vacation" to Holland &#8212; eventually arriving in the United States at Ellis Island in Upper New York Bay in 1941.

"I think he always regretted not leaving [Germany] earlier," Krisher said of his father.

At least six of his father&#8217;s siblings would later perish at the Auschwitz concentration camp, the infamous death camp built by the Nazis in Poland, he said.

"Six million Jews, members of a race, perished in concentration camps in Nazi Germany," Krisher said. "We who know the suffering know that it is humane to forgive &#8230; but we should never forget."

Now in his late 70s, Krisher, a career journalist who went from selling his own self-published magazine at age 12 to becoming the Tokyo bureau chief for Newsweek magazine, now finds himself trying to help heal the wounds of another genocide &#8212; the extermination of 2 million Cambodians by the Khmer Rouge.

"When I retired in the 90s, I thought I should give something back for all of my good fortune," he said.

Krisher said he sees his current work in Cambodia as payback for those who helped his family.

"The lesson [of the Holocaust] to me is to help people in similar situations," he said.

In addition to publishing the Cambodian Daily, a nonprofit newspaper dedicated to free press and to training journalists in the country, his Center of Hope charity has built more than 433 schools.

And he&#8217;s working to bring more art and creativity to the country, he said, explaining that since many of the educators, intellectuals and other creative minds were killed during the Khmer Rouge&#8217;s reign, many Cambodian children don&#8217;t read or even have access to books.

After what he described as more than a year of negotiations, letter-writing and pleading with author J.K. Rowling and her publishers, he was able to secure the rights to print a Khmer &#8212; the language of Cambodia &#8212; version of "Harry Potter and the Sorcerer&#8217;s Stone." At 50 cents a copy, children in Cambodia are now reading the book, and Krisher said he&#8217;s working on acquiring the rights to publish more books from the popular series.

The goodness of the human spirit and the knowledge that the world will not stand for genocide and punish those responsible, he said, are keys to making sure atrocities like the holocausts in Europe and Cambodia will never happen again.

"You have to stop it through education. &#8230; It should be taught just like crossing the street," he said. "Preach what&#8217;s right and treat all people equally."