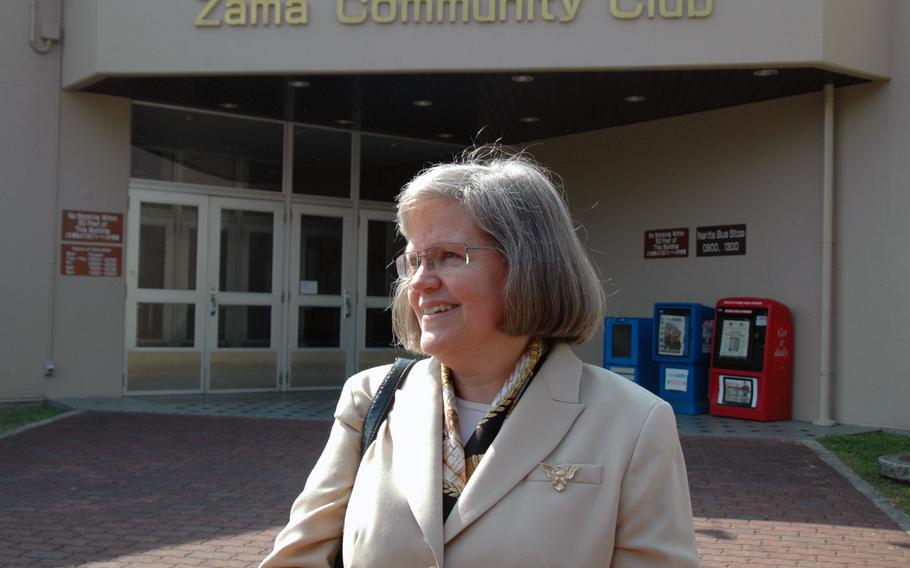 Holly Petraeus leaves the Zama Community Club after talking to soldiers about financial readiness on Wednesday. (Seth Robson/Stars and Stripes)

CAMP ZAMA, Japan — Former Gen. David Petraeus was known for his careful decision making when he was leading American troops in Iraq and Afghanistan.

However, as a young officer he and his wife, Holly, faced the same financial challenges that many servicemembers struggle with today and they didn’t always get things right.

Holly Petraeus, who is touring bases in Japan this week in her role as the Consumer Finance Protection Bureau’s assistant director for servicemember affairs, said she and her husband splurged on fancy sports cars like a 1974 Jensen Healey and a Chevrolet Corvette.

They also risked money in a realty partnership that wasn’t the wisest investment, she said.

“We weren’t always the smartest in what we did,” she said. “We didn’t do any vetting at all [of the realty partnership] and we were lucky to get out with what we put in.”

The couple was lucky that, when they bought their first home, the housing market headed higher. That hasn’t been the case for many servicemembers, who have taken out mortgages in recent years.

During a meeting with about 300 soldiers at Camp Zama on Wednesday, Petraeus asked if there were any people there whose homes were worth less than what they paid for them. Half a dozen soldiers raised their hands.

Petraeus told them about a new policy that protects military homeowners with Fannie Mae and Freddie Mac loans. The lenders will forgive outstanding mortgage debt from servicemembers who are ordered to move to a new duty station and have to sell their homes for less than they paid for them, she said.

She told the troops that she was eager to hear about their financial issues so that she could take the information back to lawmakers in Washington.

A question and answer session with the soldiers was off limits to the press, but, beforehand, Petraeus told them about a law that forces lenders to cut a borrower’s interest rate to 6 percent if they join the military.

One of those who attended the meeting, Sgt. 1st Class Ciro Bravo, 43, of New York, said he plans to pass on her advice to soldiers he supervises.

Bravo, who owes money on two cars, furniture and his Army and Air Force Exchange Service Star card, said one of his soldiers lost his security clearance due to debt but recently regained it after working hard to get his finances in order.

Indebtedness for cars and other consumer products is the most common financial problem for troops, Petraeus said.

“The Number One cause of security clearances being rescinded at this stage is for financial reasons,” she said.

Some soldiers were impressed that Petraeus was hard at work, despite the upheaval in her personal life following her husband’s recent resignation as CIA director after an extra-marital affair.

“She’s got courage to come out here and face an audience after her situation,” Bravo said. “To come out and want to help the Army community is very noble.”