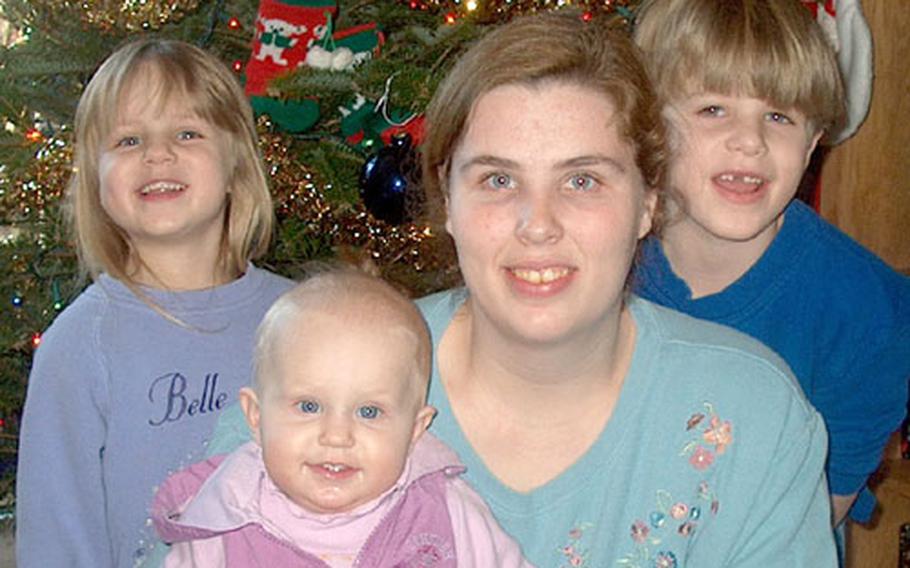 Priscilla Gille and children, Christopher, 6, Blair, 4, and Morgan, 11 months. They are the family of Sgt. Brian Gille of Company A 7-159. (Courtesy of Priscilla Brooks)

Priscilla Gille and children, Christopher, 6, Blair, 4, and Morgan, 11 months. They are the family of Sgt. Brian Gille of Company A 7-159. (Courtesy of Priscilla Brooks) Portrait of the Jacquez family, Rick, 12, Cristina, and Alexandra, 13, at Langen military family housing in Germany on Monday. Cristina says this isn&#39;t the first time her husband, Sgt. Enrique Jacquez-Balderrama has been away from home for the holidays, but the fact that he&#39;s in Iraq has the family, "stressed, nervous and very concerned for his safety." Jacquez-Balderrama is member of the 32nd Signal Battalion, in Darmstadt, Germany, and has been deployed to Iraq since February. The Jacquez&#39;s have sent several letters, "boxes of goodies," and e-mails to Enrique to help him get through the holidays. (Raymond T. Conway / S&S) 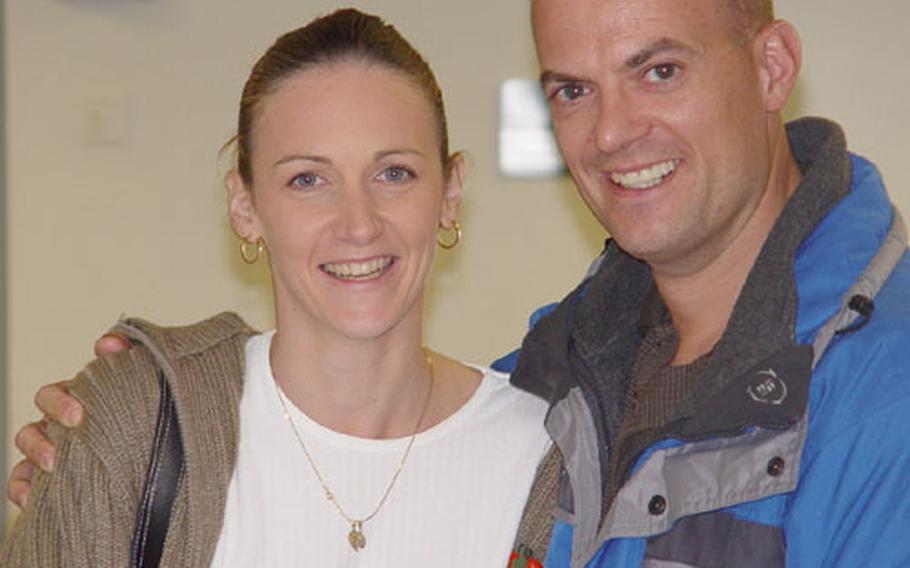 Kendra Burgess, 31, and her husband, Chief Warrant Officer 2 John Burgess, 34. He is an engineer from the 67th Combat Support Hospital in Würzburg, Germany, currently assigned to the 30th Medical Brigade in Balad, Iraq. (Courtesy of Kendra Burgess) 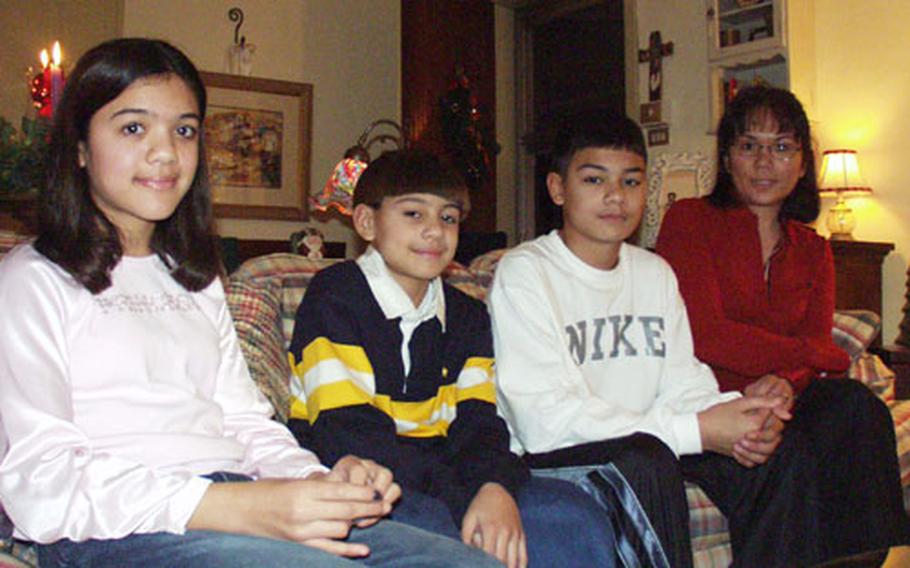 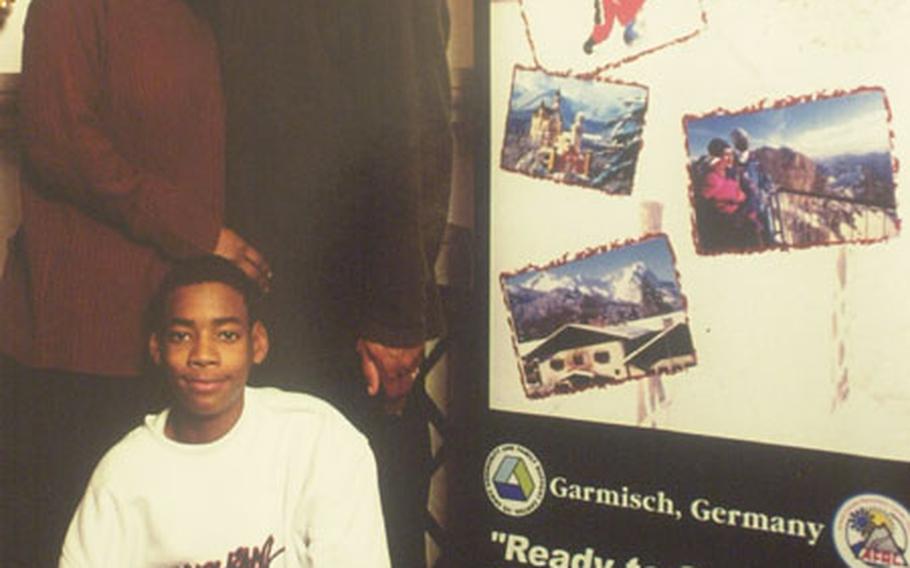 Christmas Day won&#39;t be the same for her family with her husband, Sgt. 1st Class Derrick Newell, deployed to Iraq, says Monica Newell. But the couple and their son, Terrance, made the most of Derrick pre-holiday leave with a trip to the U.S. military resort in Garmisch, Germany. (Courtesy of Newell family / S&S)

Since Christmas grabbed America&#8217;s imagination in the middle of the 19th century, it has been the country&#8217;s purest expression of family love. Religion and commerce have wrestled for the holiday&#8217;s soul, but no one ever has doubted that families ought to spend Christmas together.

This year&#8217;s Iraq war wrenched more servicemembers from their families over the holidays than in any year since 1990, creating 180,000 blue Christmases at U.S. military bases around the world.

Here in Europe, thousands of families &#8212; from Baumholder, Germany, to Vicenza, Italy &#8212; are holding up holiday traditions for the sake of the children, even though Dad or Mom is at war.

&#8220;We will enjoy Christmas, just like we always do,&#8221; said Jeanne Kelly of Illesheim, Germany, whose husband is in Iraq with the 6th Squadron, 6th Cavalry Regiment. &#8220;Weeks of planning and buying, spending money we really shouldn&#8217;t to make sure the kids are spoiled, then the 5 a.m. wake-up from one of the kids to let me know Santa has come, 15 minutes of unwrapping &#8212; and the novelty of Christmas is over.

When Sgt. Christopher Conway marched off to war with the 6th Squadron, 6th Cavalry Regiment last February, he left behind a six-months&#8217; pregnant wife, Kari.

He missed the birth of his daughter, Kiersten, and her first tooth. Now he&#8217;ll be missing her first visit from Santa.

Kari went home to Iowa last spring and gave birth to Kiersten with the support of her family. Chris, 24, arrived 10 days later but could spend only five days with his first child before duty called him back, where he is a sheet-metal maintenance supervisor for Company D, 6/6 Cavalry&#8217;s maintenance unit.

She returned to Illesheim four months later because she felt closer to Chris there. She has bonded with other Army wives, and with her German landlords, who have embraced Kari and Kiersten like family.

Typically, Kari and Chris open their presents together on Christmas. They spend a quiet day at home, preparing a turkey dinner.

Like many families with loved ones in Iraq, she intends to leave the Christmas tree up until her soldier comes back. They&#8217;ll celebrate the holiday together then.

One surprise for Chris when he arrives home will be hearing Kiersten say the first word she learned.

Even Scrooge would have a hard time fighting off the Christmas spirit at Monica Newell&#8217;s house.

The entrance to the third-floor apartment in Baumholder, Germany&#8217;s Smith Housing is trimmed with red lights and holly, and a Christmas tree is the first thing anyone sees when they walk in the door. Monica&#8217;s shiny mahogany dining room table is set for a Christmas feast with her best china, crystal and a festive centerpiece.

At least Sgt. 1st Class Derrick Newell has gotten a bigger helping of holiday spirit than many of the 125,000 U.S. soldiers currently in Iraq. Derrick, logistics noncommissioned officer in charge with the headquarters battery of the 1st Armored Division&#8217;s Division Artillery, headed back to Iraq last Thursday after 15 days of mid-deployment rest and recuperation leave.

Thursday marks the first time in the 14 years they&#8217;ve been together that her husband will miss Christmas at home because of war, Monica says.

To make up for not having Christmas together, the couple and their son, Terrance, 13, treated themselves to two days in the mountains at Armed Forces Recreation Center resort in Garmisch, Germany, where they celebrated Christmas on Dec. 15.

For Monica and Terrance, holidays are now simply time markers until their soldier comes home. &#8220;Who wants to have a family tradition without everybody?&#8221; Terrance says.

When 7-year-old Courtney Lopez had a chance to tell Santa at the Aviano Air Base, Italy, exchange what she wanted for Christmas, her reply was simple: &#8220;Papa.&#8221;

The couple shopped early for Christmas decorations, so they could be shipped down with the squadron &#8220;to make sure they had more of a Christmas,&#8221; in Iraq.

He put on a soldier&#8217;s brave front, but no one could miss the choking in Sgt. Brian Gille&#8217;s voice last Monday, a few hours before he shipped back to Iraq.

Brian and his wife, Priscilla, have been doing their best to keep things normal for their three children, Christopher, 6; Blair, 4; and Morgan, 11 months. The tree and decorations are up, even if the spirits are a little lower. This is Brian&#8217;s first Christmas away from home.

She said the burden of Brian&#8217;s absence has fallen most heavily on Christopher, who is old enough to understand that daddy is away at war, and that war is dangerous, but not quite able to grasp why people fight.

But Brian has appointed Christopher &#8220;the man of the house&#8221; in his absence, a duty the child takes seriously. On Christmas, now old enough to read the tags, he will take over his father&#8217;s job as the family Santa and hand out gifts.

The second goodbye last week truly was heartbreaking. But Christopher is marking the days on his calendar until his dad comes home. Less than two months to go.

The only gnocchi the Marcantonio family will eat this Christmas might come from a restaurant or grocery store. First Sgt. Frank Marcantonio, a second generation Italian American, is deployed to Iraq with the rest of Battery D, 1st Battalion, 319th Airborne Field Artillery Regiment from the 173rd Airborne Brigade.

The kids laugh in agreement.

Not only will the family spend its first Christmas apart this year, it seems like much of the year the head of the household has been gone. Dad went to Vicenza early in the year while the family stayed in Schweinfurt, Germany, so the kids could finish school. By the time Mom and the kids drove to Vicenza, Dad had left for Iraq.

So, by the time Dad gets home in the spring, he&#8217;ll have some very tough competition.

Walk up to Jeanne Kelly&#8217;s front door at Illesheim Army Airfield, and you won&#8217;t see a Christmas wreath. The yellow ribbon &#8212; the universal sign of deployed soldiers &#8212; has been there since her husband, Sgt. Ryan Kelly, left for Iraq with the 6/6 Cavalry in February.

It has been an especially trying year for the Kellys. The father of one of her children&#8217;s friends, a soldier in the unit, died in Iraq in September when a tire he was changing exploded. That prompted fears that their daddy, too, would not come home.

Also, Jeanne suffered from painful kidney stones that required hospitalization and surgery. She said she had to fight the Army to keep her children out of foster care and to get her husband home on emergency leave. She&#8217;s only recently recovered.

Jeanne and the kids sent some Christmas cheer to Ryan in the desert, including a little tree, cards and photos of the gifts that are waiting for him under the tree at home, wrapped in a big red bow.

Back in Illesheim, Santa will come to the house as usual. But the tree will stay up and family presents will remain wrapped until Ryan returns in February.

Even as Edie Hoyte faces the toughest holiday season of her 14-year marriage, she and sons, Michael, 11, and C.J., 9, thought of someone less fortunate than themselves.

Edie&#8217;s husband, Sgt. 1st Class George Hoyte, left early last February for Iraq with the 6/6 Cavalry, for whom he works as the noncommissioned officer in charge of the personnel shop. Although he did get a brief R&R trip to Qatar last month, he hasn&#8217;t come home to Germany.

She and her husband feel a strong responsibility to set a good example not only for her sons, but for the many younger families on the small base at Illesheim.

With her husband gone at Christmas for the first time in their 13-year marriage, Kendra Burgess is returning to the bosom of family for the holidays.

Kendra, 31, and her husband, Chief Warrant Officer 2 John Burgess, met in high school in their hometown of West Plains, Mo. She and children, Erica, 13, and Ashton, 9, will bask in the attention of grandmas and grandpas.

It&#8217;s been a lonely 10 months since John, an engineer with the 67th Combat Support Hospital in W&#252;rzburg, left for the Middle East. He deployed without the rest of his unit, attached to the 30th Medical Brigade at Balad Air Base 60 miles north of Baghdad.

Only a few people from the 67th CSH deployed, so the unit&#8217;s Family Readiness Group never mobilized. She has pulled through the war by building her own support network, with her children providing two of the pillars.

John left home early this month after an all-too-brief R&R visit. It was wonderful while it lasted, and bittersweet when it ended.

The family will return right after New Year&#8217;s. Although she&#8217;s often felt alone, Kendra said she does not regret staying in Germany.

He recommends videotapes, audiotapes, phone calls, e-mails, letters, anything that keeps families in touch. But avoid media coverage of Iraq, which can only cause anxiety.

He thinks families of deployed servicemembers need to support each other any way they can. Family Readiness Groups need to support their members, including spouses who seem to be chronic complainers, because they often are the ones who need help the most.

Despite the long deployment, he said he has seen relatively few people seeking treatment for depression this Christmas. Perhaps it&#8217;s because this deployment is nearly over.