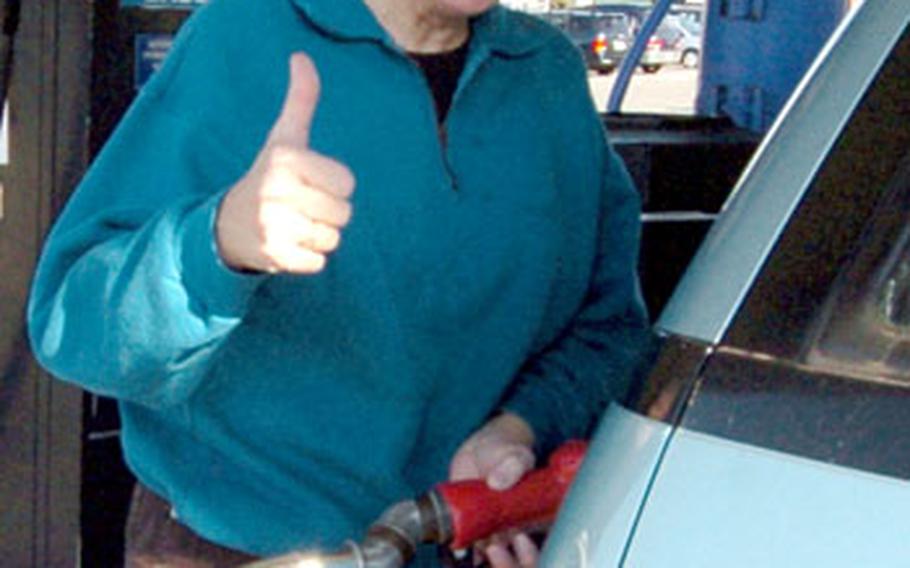 DODDS teacher Susan Sampson expresses her satisfaction about the lower gas prices as she fuels up Friday on Yokosuka Naval Base, Japan. (Tim Wightman / S&S)

On-base gasoline pumps were another hot spot for Black Friday shoppers on mainland Japan and Okinawa.

They were there to take advantage of a $1.63 drop in the price of mid-grade unleaded, down to $2.43 per gallon on Friday. For months the price held at well more than $4 per gallon &#8212; long after prices stateside fell to $2 and less.

"I was delighted. Merry Christmas to me," said Susan Sampson, a teacher at Yokosuka Naval Base, Japan.

At the Yokota Air Base, Japan, Army and Air Force Exchange Service main department store, signs and intercom announcements advertised the gas price drop. AAFES offered an additional savings of 25 cents a gallon for those who spent more than $250 in the store.

While many we pleased with the news of the price decrease, others voiced their frustration with the overall gas pricing system.

Sampson said that while the old price was high, the lack of options was what really frustrated her.

Joanie Collins, a teacher at Kadena Air Base, Okinawa, said she was frustrated because the price on base was still not comparable to the prices at stateside pumps.

The drop is still not enough, she said, especially for servicemembers with families trying to survive on military pay.

"For those living paycheck to paycheck, I think it&#8217;s a little too late," she said.