Holiday over, U.S. civil affairs team back at work in Iraq 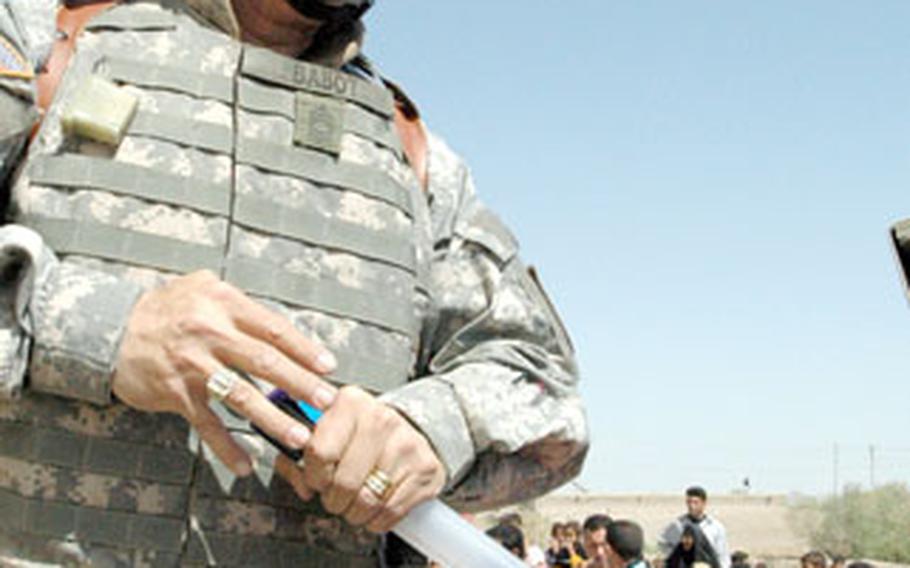 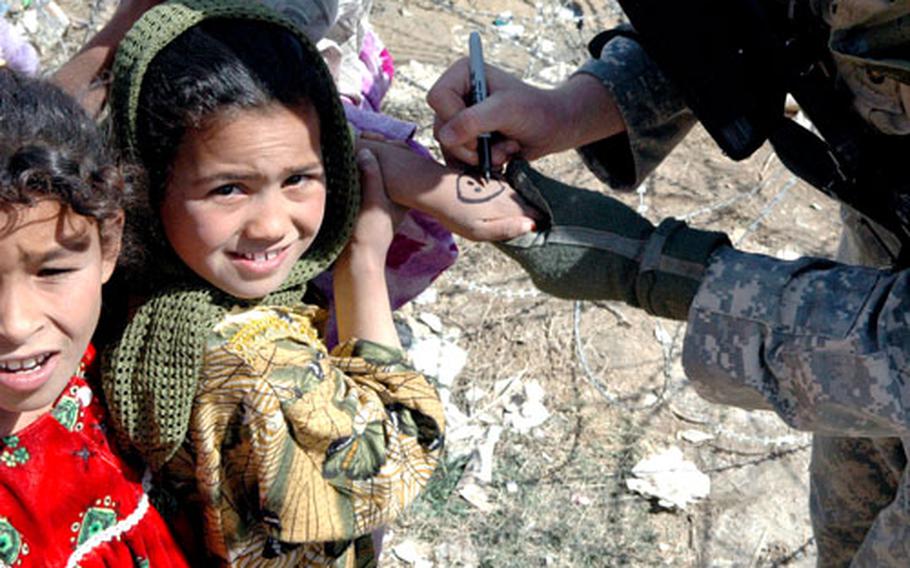 A soldier with the 48th Brigade Combat Team draws a smiley face on an Iraqi girl’s hand while handing out gifts of shoes, food and toys at a medical and humanitarian mission Saturday. (Monte Morin / S&S) A convoy of U.S. vehicles swerves to avoid a crowd of Ashura pilgrims who surged into the road and threw stones at the passing Humvees last week near Camp Scania. (Monte Morin / S&S) 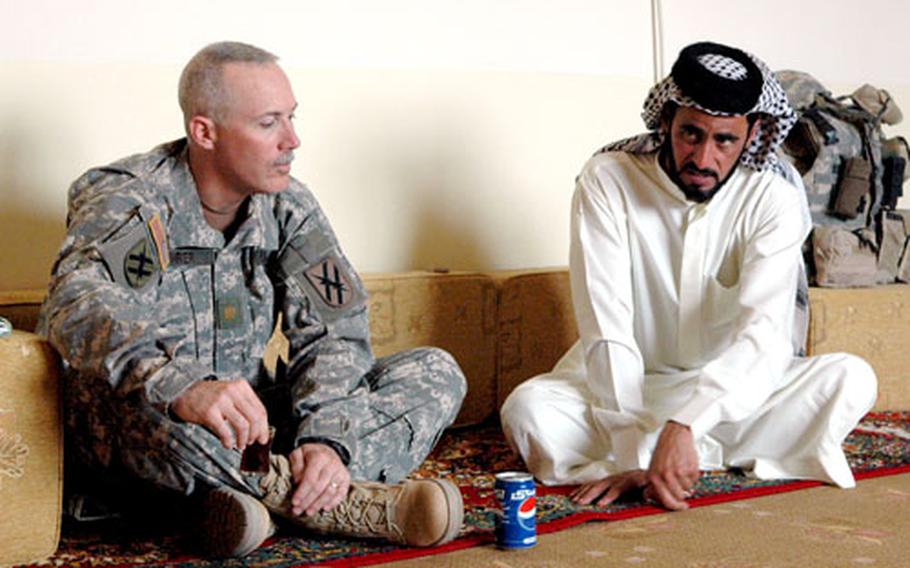 CAMP ADDER, Iraq &#8212; The children of Al Harza village could teach a used car salesman a thing or two about persistence.

Clamoring around a handful of Humvees and pressing up against coils of razor wire, children with dust-caked faces and feet demanded soccer balls, pens, pencils, sunglasses, watches, candy, magazines and water bottles from exasperated soldiers.

The children pressed their case for a full five hours &#8212; the amount of time civil affairs soldiers with the 48th Brigade Combat Team operated a field medical clinic at a village school they recently refurbished.

Neither the swarms of biting gnats nor the blazing sun dampened the children&#8217;s enthusiasm.

Saturday&#8217;s clinic was the first time in weeks that civil affairs soldiers had ventured into the towns and villages surrounding Nasiriyah to distribute humanitarian goods and medical services to locals. Commanders of the Georgia Army National Guard unit had curtailed excursions into the surrounding villages and towns during the Ashura holiday, when masses of pilgrims trekked to and from the Shiite holy city of Karbala.

On Saturday, an Iraqi doctor and medical personnel from the U.S. Army and Air Force examined more than 100 adults and children who complained of health problems, as soldiers outside the school handed out gifts of shoes, food, toys and toiletries. It was the fourth such operation that 48th BCT soldiers have performed in the area.

The scene was one of organized chaos as dozens of soldiers, Iraqi police officers and interpreters struggled to organize more than 300 villagers into orderly lines.

&#8220;This is one of the ways we can interact with and support the local government, Ministry of Health and local tribal leaders,&#8221; said Maj. Joe Rohrer, the 48th BCT&#8217;s civil affairs chief. &#8220;This is how we can support their requests for medical assistance, as well as improve relations with people in Iraq.&#8221;

During Ashura, commanders had barred excursions into the surrounding villages and towns after getting reports that Shiite extremists or insurgents might try to provoke a clash with American soldiers.

For soldiers of the 48th BCT, the holiday passed without major incident &#8212; although a convoy from another unit that was passing through the area did fire on a bus of pilgrims, killing at least one. The incident is under investigation.

Also, 48th BCT soldiers stationed at Camp Scania, roughly 80 miles south of Baghdad, had a minor run-in with a crowd of white-shrouded demonstrators in their area. A civil affairs unit was on its way to a local school when it passed the group. The pilgrims surged into the roadway, shouted and threw rocks. One turret gunner was hit on the shoulder by a rock.

&#8220;Those guys were extremists,&#8221; said Capt. Rod Tatum, a civil affairs officer with the 108th Armor Regiment of the 48th BCT. &#8220;They were probably Mahdi guys,&#8221; the 28-year-old Savannah, Ga., native said, referring to followers of the militantly anti-American Shiite cleric Muqtada al-Sadr.

As the 48th BCT prepares to return home to Georgia within the next two months, some civil affairs soldiers have expressed mixed emotions. Many of the soldiers who are now conducting civil affairs duties were assigned to artillery units during an initial deployment just south of Baghdad.

While helping to build and refurbish local schools, roads and water networks has been very rewarding, some soldiers said they had grown weary of hearing children&#8217;s relentless demands for soccer balls, pens and watches.

Others said they were less than enthusiastic about working within the network of local sheikhs to award contracts. In many cases, the soldiers said, sheikhs used U.S. funds to improve their own status and property, and steered projects to their contractor friends and relatives.

Civil affairs officers say the system is changing. Where once U.S. forces dealt directly with sheikhs, that responsibility is now being transferred to local government officials.

During a visit to a sheikh&#8217;s home last week, Rohrer explained over a lavish lunch of lamb and rice that local leaders would soon have to go to the local government for project requests.

The sheikh was less than thrilled to hear this.

Rohrer told the sheikh that was the nature of government.