Holiday mailing crush at Yokota leads to call for help 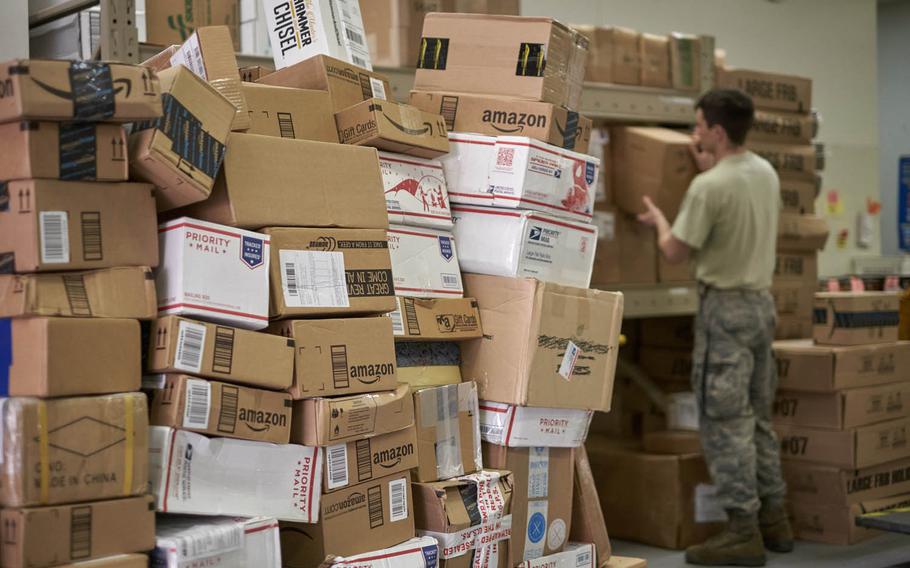 Senior Airman Kian Manning of the 374th Post Office at Yokota Air Base, Japan, sorts through a mountain of packages on Tuesday, Dec. 15, 2015. The Yokota post office is experiencing an unusually high number of packages this holiday season, in large part to a higher Cost of Living Allowance at the air base and record online sales, officials say. (James Kimber/Stars and Stripes)

YOKOTA AIR BASE, Japan — Overwhelmed postal workers have called for reinforcements to help battle a deluge of holiday packages at Yokota Air Base.

The base mail room, which receives about 200 packages on a typical day, has been taking delivery of three times as many items this month, said Tech Sgt. Bryan Weatherman, Yokota’s postmaster.

“With the Cyber Monday and Black Friday sales, all the mail has arrived at once,” he said. “It wasn’t as much last year.”

On Monday, Weatherman posted a photo on the Facebook group “YokotaTalk” of packages spilling out of the mail room’s shelves, along with pleas for customers to pick up their packages and volunteers to help sort them. So far 50 to 60 volunteers have stepped up, he said.

The mail room was bustling with activity on Tuesday, with airmen and volunteers handling packages as pop music blasted on a sound system. However, the shelves filled up again as fast as they were cleared as vans arrived with more packages.

“All the shelves are filled,” Weatherman said.

There are so many packages the mail room had to borrow tables from Yokota’s Samurai Fitness Center to stack them on, he said.

“As soon as we get packages out, there are more on the way,” Weatherman said. “It’s not going to stop.”

A consolation for the overworked airmen and volunteers: None of the packages weigh more than 70 pounds, the limit for mail sent through the military postal system.

Popular items arriving this year include electronics such as computers and electric hoverboards. The military mail system used to prohibit objects powered by lithium batteries, but that rule was changed a couple of years ago, Weatherman said.

Among those lining up for a package on Tuesday was Cheryl Lowery, 57, a civilian spouse. She had a big smile on her face after receiving a box of Christmas cookies baked by a neighbor at her husband’s old duty station in Hanau, Germany.

“They are pretty impressive,” she said of the airmen and volunteers who were sorting packages in the mailroom.