Holiday hubbub: Plenty to do as Christmas nears 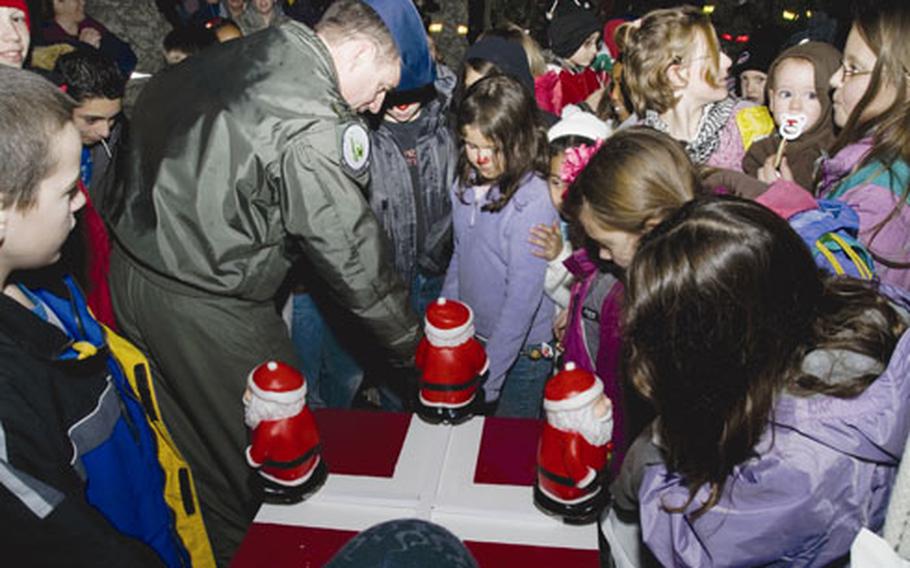 Col. Jay Silveria, commander of the 48th Fighter Wing, helps children turn on the Christmas tree during a lighting ceremony Dec. 5 at RAF Lakenheath. (Courtesy of the U.S. Air Force)

RAF LAKENHEATH &#8212; Coordinating the baking, stockpiling and delivery of 12,000 cookies is no easy task.

"Our hearts go out to these young airmen who are separated from their families back home this holiday season," Moseley said. "The closeness of an overseas military community and its ability to come together for a great cause is awe inspiring."

Meanwhile, at nearby RAF Lakenheath, Micah Steinwandt is busy stuffing more than 100 stockings to send to other single and deployed airmen.

Steinwandt, who helped start the organization three years ago, is also planning several outings over the next few weeks, including a trip to Euro Disney in Paris. And on Christmas Day, Steinwandt is hosting a day of Christmas movies, games and holiday goodies for single airmen on base.

With a headquarters of sorts at the dorms, Steinwandt said the group, while affiliated with the chapel, aims to serve airmen of any or no religious background.

"We just try and be there for them, especially during the holidays," he said.

With the preparations under way and displays of holiday lights and decorations out in force around the bases, it&#8217;s beginning to look a lot like Christmas. If you&#8217;ve been in a post-Thanksgiving haze the past two weeks, then wake up. The "holi-daze" is here.

And a flurry of wintery festivals and performances are happening in and around the bases over the next few weeks. So bundle up and enjoy the holiday buzz in the air.

Here are a few examples: