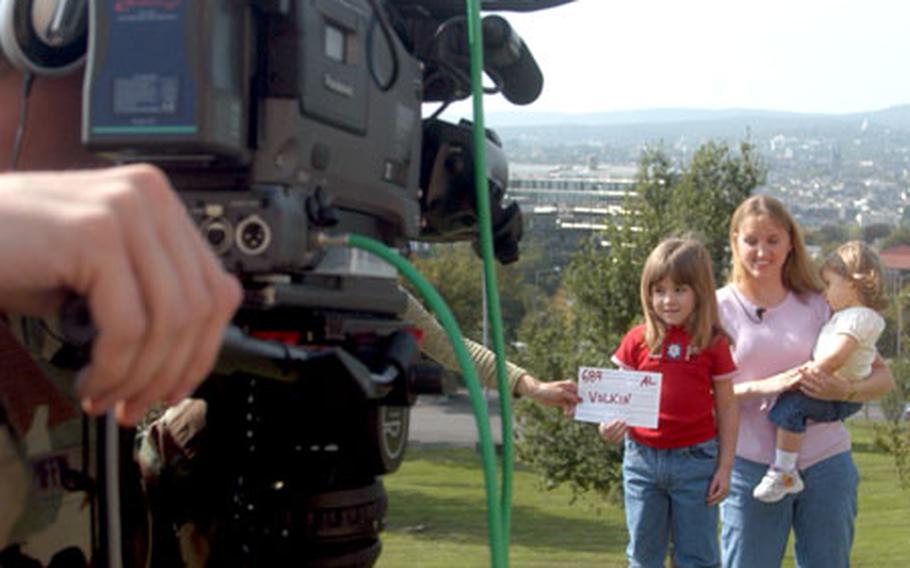 Coming to a base near you — hopefully — will be a team from the Army and Air Force Hometown News Service, which for a generation has collected and sent videotaped messages to friends and families in the U.S. as part of the annual Holiday Greetings program. In Wiesbaden on Wednesday, a crowd of people turned out to pass along their holiday greetings. Among them were Cheri Volkin and her daughters Cassie, left, and Annaliese. Filming this spot is Air Force Airman 1st Class Alex Griffin, an augmentee from Incirlik Air Base, Turkey. (Kevin Dougherty / S&S)

WIESBADEN, Germany &#8212; The Holiday Greetings program is making the rounds of Army and Air Force bases in the Europe and Pacific theaters, but it nearly got iced this year because of a lack of money and manpower due to the war effort, according to program operators.

That&#8217;s when the Air Force gave the Army and Air Force Hometown News Service in San Antonio enough cash to send him and a colleague to their respective theaters for a month, Malone said. Augmentees and volunteers round out the two video teams, each of which includes at least three people.

Lest anyone think the program is ornamental waste, all tinsel and no tree, consider the following: Nine out of every 10 greetings taped are aired in the United States, either on radio or TV.

About 2,500 TV and radio stations in the United States participate in the program, which debuted in 1983, Grogan said. Typically, the holiday hellos start to air over Thanksgiving Day weekend.

Each greeting runs roughly 15 to 20 seconds, usually at commercial breaks during the local evening news.

This year&#8217;s yield will probably fall well short of the 2005 effort, when 11,000 greetings were collected worldwide, Malone said Wednesday as he waited for greeters outside the commissary in Wiesbaden.

He figures his team and the one in the Pacific theater will record about 4,000 messages between them. That tally doesn&#8217;t include spots independently taped and sent to the news service, which could mean a few thousand more.

Some may end up coming from Installation Management Agency-Europe, which wants to give a few outlying communities in Germany a better chance to participate. Giessen, Friedberg and Schweinfurt have been mentioned as possible locations, though a final schedule was still being worked up, said Julio Hernandez, a spokesman for IMA-Europe.

The program &#8220;means so much to so many people,&#8221; said Airman 1st Class Alex Griffin of Incirlik Air Base, Turkey, who is touring with Malone.

Griffin agreed with Malone that, to a degree, automation is cutting into their business. Malone said the Internet, webcams and inexpensive, overseas calling cards now allow families and friends to stay in better touch with deployed servicemembers.

Technological advances or not, Cheri Volkin was glad Wednesday to have the chance to give family and friends in Huntsville, Ala., an earlier holiday cheer. Joining her was 5-year-old Cassie and 20-month-old Annaliese.

Malone and Griffin said it&#8217;s those types of personal touches that have made the program an institution.

Stars and Stripes reporter Matt Millham contributed to this story.