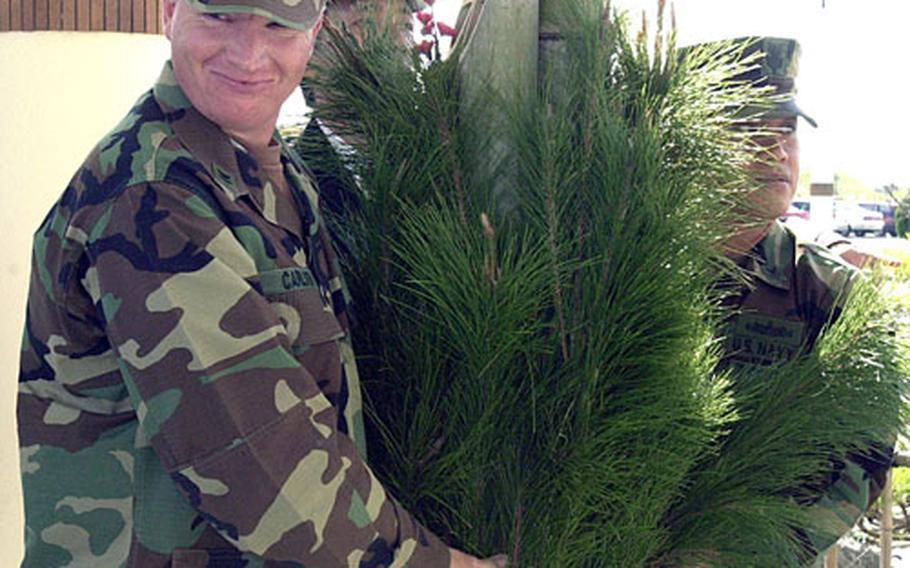 U.S. and Japanese sailors carry a kadomatsu, a traditional Japanese New Year decoration, to the entranceway of the headquarters for Command Fleet Activities Okinawa on Kadena Air Base Wednesday. (Cindy Fisher / S&S) 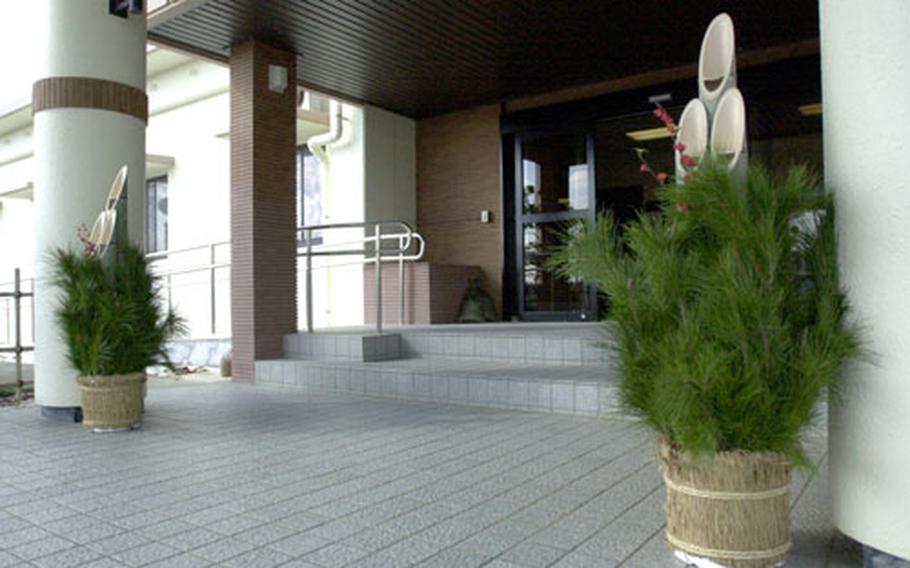 The kadomatsu, a gift from their Japanese counterparts, at the entrance to CFAO headquarters on Kadena. (Cindy Fisher / S&S) Akira Akehi, commander for Japanese Maritime Self Defense Force White Beach Sub-Area Activity, explains the significance of the dried squid on the kagami mochi presented to the sailors at the headquarters for Commander Fleet Activity Okinawa Wednesday. Dried squid was used because "it is chewy like gum," he said. It takes a long time to eat it and that symbolizing having plenty to eat throughout the new year. (Cindy Fisher / S&S)

KADENA AIR BASE, Okinawa &#8212; The aroma of squid permeates the halls of the Navy&#8217;s Commander, Fleet Activities Okinawa headquarters thanks to some Japanese New Year&#8217;s traditions.

The gifts were part of a cultural exchange that began three years ago, said Command Master Chief Kevin Haun. As in past years, U.S. sailors gave their Japanese counterparts a Christmas tree earlier this month.

&#8220;To understand each other, the biggest step is understanding our cultures,&#8221; Akehi said.

To that end, Akehi and others explained the two gifts to assembled U.S. sailors.

At the new year, kadomatsu is set at gates or doors to welcome the god of the year and ancestral spirits. The ornament&#8217;s pine boughs represent longevity and the bamboo is a symbol of prosperity, said CFAO&#8217;s Sheryl Kohatsu.

Sailors put their kadomatsu at the headquarters&#8217; entrance so that all who walk through can share in the decorations&#8217; good luck, Kohatsu said.

Kagami mochi also brings good luck, she said. It consists of two rounded balls of mochi &#8212; pounded rice dough &#8212; stacked atop one another to symbolize piling on another year of life. It is garnished with an orange or tangerine and sometimes seafood.

Akehi said dried squid is used because it is chewy and takes a long time to eat, symbolizing having plenty to eat throughout the new year.

Haun said the kagami mochi already has brought him good luck, as Jan. 11 marks 30 years of service for him.

It was a sentiment shared by several of his sailors.