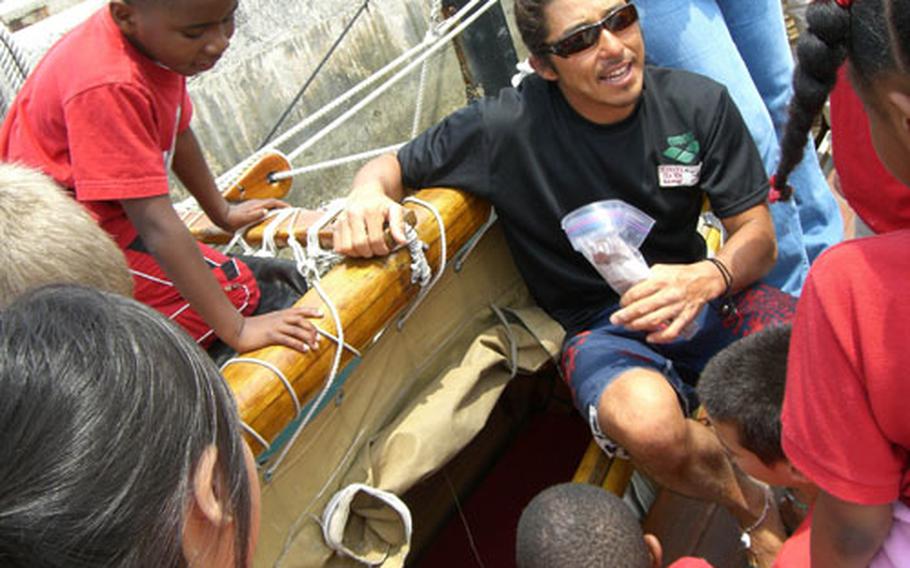 Helping the students get hands-on experience of sailing with the canoe is crewmember Takuji Araki. Araki shows them a ‘bedroom’ for the crew, a narrow bunk in the canoe’s bottom. (Chiyomi Sumida / S&S)

Helping the students get hands-on experience of sailing with the canoe is crewmember Takuji Araki. Araki shows them a ‘bedroom’ for the crew, a narrow bunk in the canoe’s bottom. (Chiyomi Sumida / S&S) 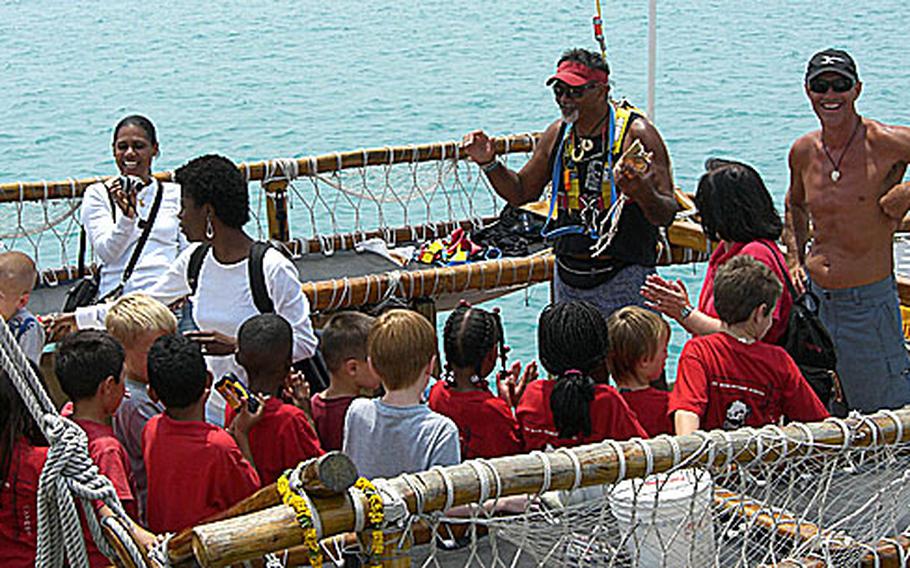 The canoe, which crossed the Pacific without navigation instruments, arrived in Okinawa after sailing 1,200 miles, for 11 days from Yap. (Chiyomi Sumida / S&S)

ITOMAN, Okinawa &#8212; The crew has logged 7,000 miles in the open sea without the help of navigation tools.

They bathe in sea water and ration drinking water. They sleep in shifts on makeshift beds.

And when they have to relieve themselves, they strap themselves to a safety harness and sit over a running board on the side of vessel.

Far from life in the modern Navy, it&#8217;s day-to-day routine aboard the Hokule&#8217;a, a 63-feet-long, 18-feet-wide double-hulled sailing canoe that pulled into Okinawa&#8217;s Itoman port last week in its first stop in Japan.

The Hokule&#8217;a, which means &#8220;star of gladness,&#8221; was built in 1975 and is a replica of a Polynesian voyaging canoe from 600 years ago. It left Hawaii in January for its first journey to Japan to honor Hawaii&#8217;s historical ties with the country from where many immigrants came.

So when the vessel and its 12-member crew arrived, a curious group of students from Bob Hope Primary and Stearley Heights Elementary schools on Kadena Air Base were eager to check it out.

Once aboard, Takuji Araki, who lives on Okinawa but is taking part in the voyage, welcomed the students and told them about life on the sailing canoe.

Strips of brown dried fish in a plastic bag Araki took out caught the attention of many students, who appeared to be having a hard time considering it as food.

Araki then showed them the crew &#8220;bedrooms.&#8221; One after another, the children peeked into a hideout-like bunk in the bottom of the canoe.

But would she sleep in there?

The day also was special for Gwen Fred, a teacher at Bob Hope and a third generation Japanese-American from Hawaii.

The Hokule&#8217;a sails with an escort boat fully-equipped with modern technology, but it provides no navigation assistance, said the captain of the escort boat, Michael Taylor.

Taylor, a retired Army Special Forces lieutenant colonel, has lived in Hawaii since 1986 and five years ago joined the Polynesian Voyaging Society, which owns Hokule&#8217;a.

Until then, Hokule&#8217;a was something like he&#8217;d see in a National Geographic or on the Discovery Channel, he said.

After leaving Okinawa, Hokule&#8217;a will stop at Kumamoto, Nagasaki, Fukuoka, Yamaguchi and Hiroshima, the ancestral lands of many Japanese immigrants to Hawaii. It will then visit Uwajima, where the crew will pay homage to families of those who died in 2001 collision between Uwajima-based fishery training boat, Ehime Maru, and Honolulu-based submarine USS Greenville.