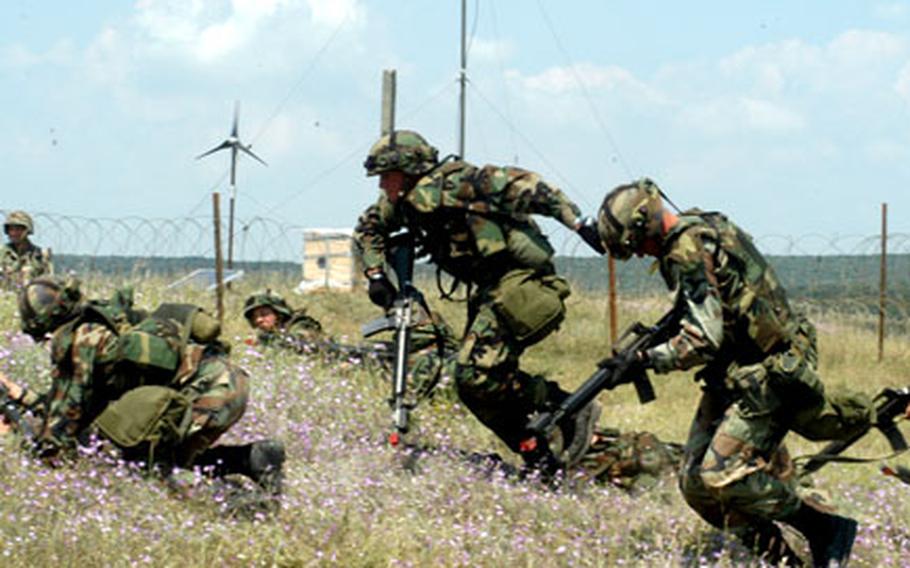 Texas National Guardsmen charge a mock city during urban combat training last summer in Romania. U.S. troops will return to Romania this summer for another round of training. (S&S file photo)

HOHENFELS, Germany &#8212; The Joint Multinational Readiness Center will send observer controllers to Bulgaria, Romania, Afghanistan and Iraq this year to work with U.S. and foreign troops.

Dates have not been set for the training, but the former East bloc nations would probably see visits by U.S. forces this summer, according to Lt. Col. Jeffrey Smith, the center&#8217;s deputy director of plans, operations and training.

U.S. and Romanian officials reached an agreement in December that allows U.S. forces to train, preposition equipment and, if necessary, stage and deploy from Romania. And the Bulgarian defense minister has said U.S. and Bulgarian officials expect to reach an agreement on basing U.S. troops in Bulgaria by March.

In Bulgaria, the training will be at the Novo Selo Training Area, where 450 1st AD and Joint Multi-National Training Center soldiers trained alongside Bulgarians for three weeks last July during Immediate Response &#8217;05.

Hohenfels-based JMRC observer controllers also traveled to Afghanistan in October last year to work with U.S. and Afghan troops, and trainers have been on several short trips to Iraq to get up-to-date information on threats and tactics to incorporate in training programs, Smith said.

&#8220;We are looking at sending small groups of soldiers to Iraq and we want to send soldiers to Afghanistan again this year,&#8221; he said.

The JMRC also is expecting soldiers from various eastern European countries including the Czech Republic, Romania, Bulgaria and Poland, as well as Afghan and Italian soldiers to train at Hohenfels this year, Smith said.

&#8220;Hohenfels works very closely with a number of eastern European countries. We are working all the time to improve relations with them and help them improve their armies. We think we can do that with observer controllers,&#8221; he said.

U.S. and foreign troops training at Hohenfels this year will find themselves at a facility that has seen plenty of changes designed to take account of the war on terror, said JMRC public affairs officer Capt. Scott Rawlinson.

Hohenfels includes a 10-by-20-kilometer training area known as &#8220;the box&#8221; that features five artificial towns known as MOUT (Military Operations in Urban Terrain) sites, nine after-action review sites where soldiers can review their performance after a training event, and three base camps designed to simulate the environment soldiers will face when deployed, Rawlinson said.

The JMRC also has its own opposing force &#8212; 1st Battalion, 4th Infantry Regiment &#8212; that can take on a variety of roles, from insurgents to the Iraqi Army and police. And as many as 500 German employees can be brought in to act as civilians on the battlefield during exercises, he said.