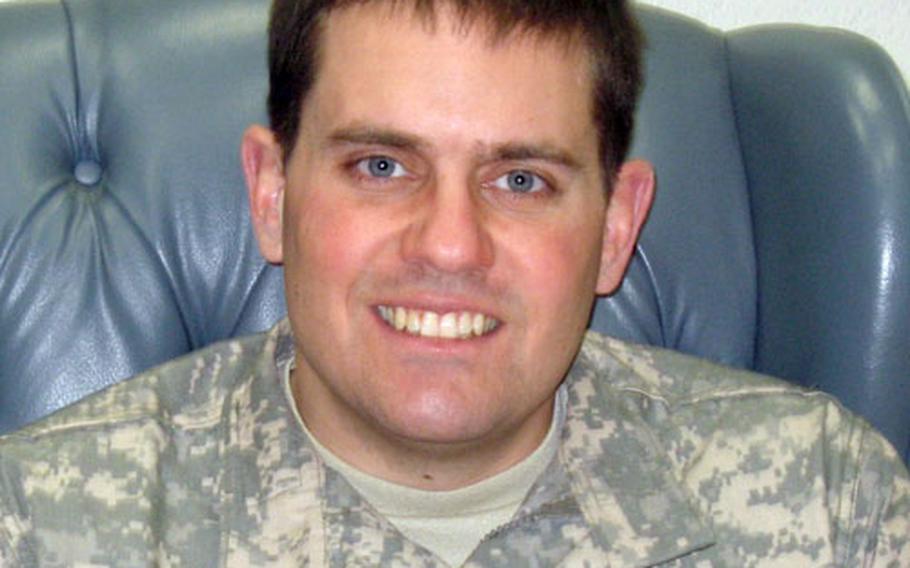 Capt. Mark A. Garner, 30, was killed July 6 when his Humvee struck a roadside bomb in Afghanistan. (Photo courtesy of U.S. Army)

The Joint Multinational Readiness Center in Hohenfels, Germany, is mourning the loss of one of its own.

Army Capt. Mark A. Garner died from injuries he suffered Monday when his Humvee struck a roadside bomb in Afghanistan&#8217;s Arghandab District, according to an Army news release.

At the time of the blast, Garner was traveling with a group of U.S. Navy explosive ordnance disposal specialists.

Garner, 30, of Elkin, N.C., is survived by his wife, Nickayla; father, Donnie Ray; mother, Elizabeth; and sisters, Rachel and Jo.

"As difficult as this is to accept, what makes it easier is knowing that Mark was happy and content as a soldier. Mark died doing the job he loved, and we will cherish fond memories of him forever," his family said in the release.

A graduate of the U.S. Military Academy at West Point, N.Y., Garner was commander of Company B, 1st Battalion, 4th Infantry Regiment.

It was his third deployment; he had two prior deployments to Baghdad. Garner&#8217;s company is part of a unit that attaches to a Romanian army battalion when it deploys.

His unit is part of Task Force Zabul, which patrolled the area and trained and mentored Afghan National Army and police units, the release said.

The Elkin Tribune newspaper reported that Garner was a 1997 graduate of Elkin High School, where he excelled in sports.

The paper also reported that businesses in Elkin were being asked to hang flags on Friday to honor Garner, and that his family had left for Dover Air Force Base, Del., to witness his body&#8217;s return to the States.

In the Army statement, his family described him as always the optimist and a very happy person who was easily embarrassed by his wife. He was also an avid traveler who visited 52 countries in the last 12 years.

Funeral arrangements have not been completed, but a memorial service will be held at the First Baptist Church of Elkin, the release said.

A memorial service in Germany will also be held later this month, JMRC officials said.