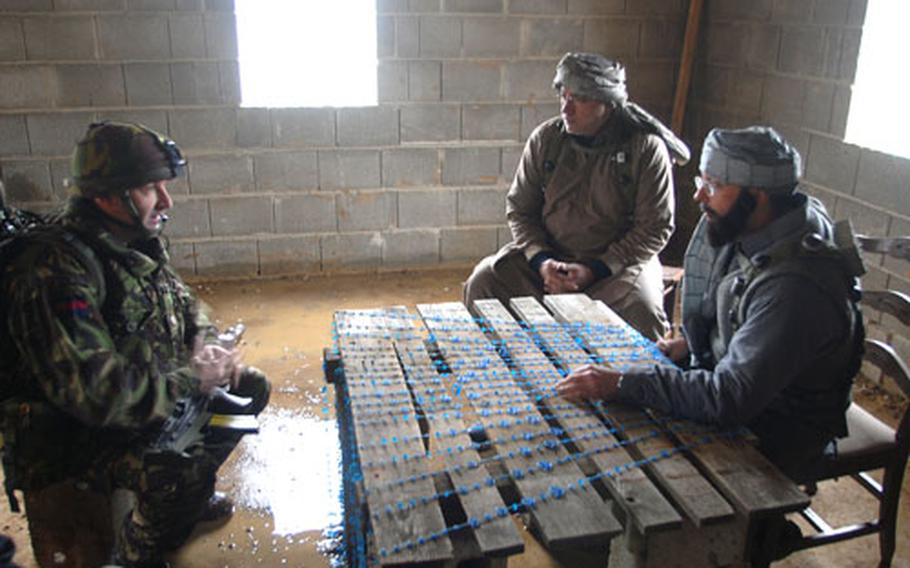 A Grenadier Guard watches for trouble from the top of his Landrover during training. (Seth Robson / S&S) 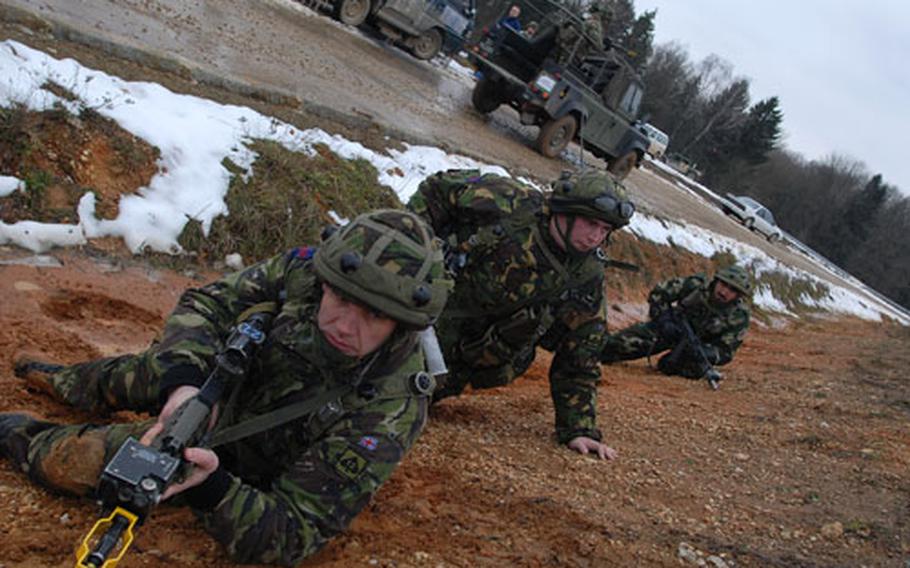 In a two-week exercise, 73 soldiers and police from the Afghan National Army and Kabul Police District are learning the latest downrange tactics alongside personnel from Canada, Croatia, France, Germany, the Netherlands, Norway and the United Kingdom.

On Wednesday a platoon of British Grenadier Guards joined Afghan soldiers to practice negotiating with Afghan officials in a small town, fighting Taliban insurgents and reacting to a simulated roadside bomb.

Maj. Dirk Ringgenberg, a U.S. observer with Hohenfels&#8217; Joint Multinational Readiness Center who helped run the exercise, said participating British officers and noncommissioned officers learned military skills, such has how to conduct a cordon-and-search operation, that they will eventually teach Afghans.

The 37-year-old Madrid, Iowa, native passed along knowledge he gained from a recent mission to Afghanistan, he said.

&#8220;Afghanistan is nothing like Iraq, and I did a year there as well. The terrain is different and so is the type of fight that they are going to be engaged in with their Afghan soldiers. It is a war in the truest sense &#8212; not sectarian violence,&#8221; he said.

Color Sgt. Mark Hill, 36, of Leeds, England, said he observed the exercise with a view to conducting similar training in the U.K. The Yorkshire Regiment soldier, who served in Iraq and speaks Arabic, said the British army emphasizes language training for soldiers headed downrange.

&#8220;We only have one interpreter per patrol so we put a lot of emphasis on cultural awareness and language,&#8221; he said, adding that one of the Grenadier Guards participating in the exercise learned to speak the Dari language spoken in Afghanistan in three months.

The training is not all new to the Afghans, many of whom are battle-hardened veterans. According to Zmerck, a recent battle he fought in the country&#8217;s Kunar province resulted in six captured Taliban with no friendly losses.

Warsaji said the Taliban is involved in the drug trade, which makes a mockery of their claims that they are good Muslims.