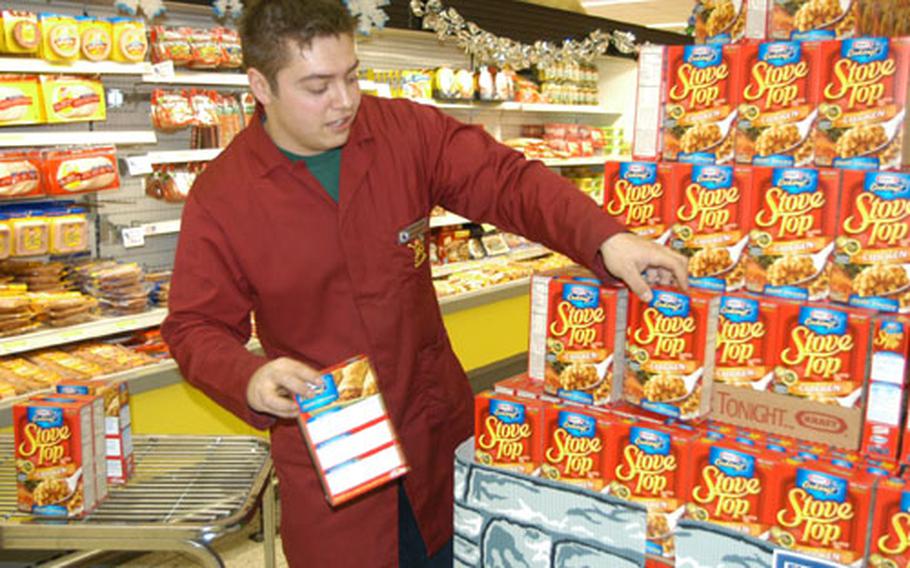 Daniel Paetzold, a worker at the commissary in Hohenfels, Germany, builds a display at the store Friday. Hohenfels won the Director&#39;s Annual Golden Performance Award for a large commissary in Europe, and Livorno, Italy, won for small commissary. (Rick Emert / S&S)

The store in Hohenfels, Germany, won the Director&#8217;s Annual Golden Performance Award for large stores in Europe, and the store in Livorno, Italy, won the award for small stores. The awards were announced during a Europe zone managers meeting in late November, Gerri Young, DECA-Europe spokeswoman, said.

Hohenfels also won an award for inventory accountability in all departments.

While exceeding the standards of the awards&#8217; criteria may have been challenging enough, both stores face challenges in their daily operations.

The Hohenfels store serves hundreds of soldiers on a training rotation at the Joint Multinational Training Center. The Livorno store&#8217;s staff is made up completely of local nationals, from the director down.

&#8220;The training area lets us know about how many soldiers are coming,&#8221; said Jimmie Holzhauser, store director at Hohenfels. &#8220;We can predict the kinds of things they&#8217;ll be buying, like beef jerky, barbecue meats and chips and sodas.&#8221;

In Livorno, store director Giuseppe Ricci holds regular staff meetings on how his staff can best serve its American customers.

Additionally, the small store with only four checkout registers creates themed displays within its limited space and decorates part of the warehouse for a &#8220;Christmas Corner&#8221; that houses holiday items for sale, Ricci said.

The Hohenfels store saved its community more than $1 million over the past year through specials and outreach programs.

&#8220;We have units and individual customers who come in and say they have a limited budget and show us what they need,&#8221; Harmon said. &#8220;We walk around the store with them, show them the specials and show them how they can come out best in meeting their needs.&#8221;

Since no judging team inspected the stores, both Ricci and Holzhauser said the awards came as a surprise.