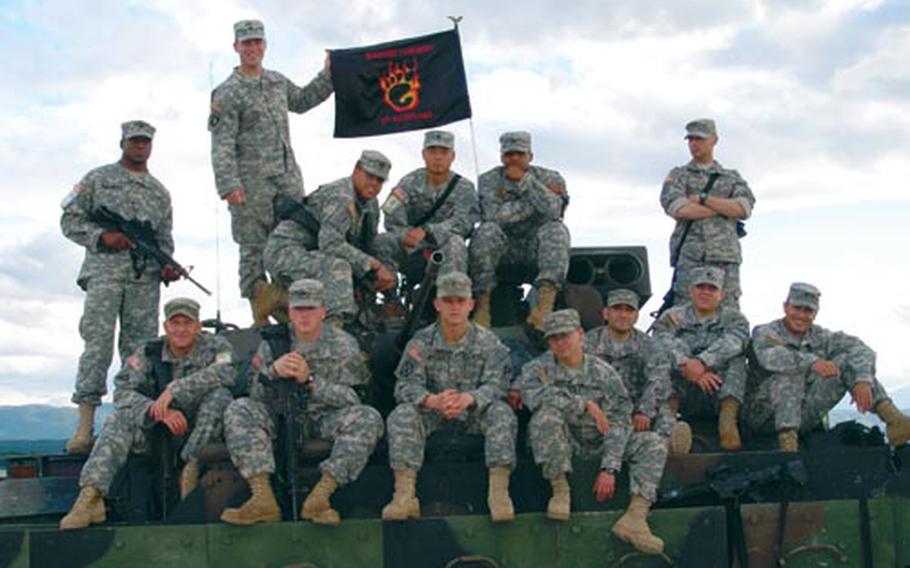 Members of the 3rd Platoon, 1st Battalion, 4th Infantry Regiment deployed to Kosovo earlier this year to provide a little muscle in case things went awry when the Balkan nation declared its independence from Serbia. (Photo courtesy of U.S. Army)

GRAFENW&#214;HR, Germany &#8212; Soldiers from 1st Battalion, 4th Infantry Regiment deployed to the Balkans earlier this year to provide Kosovo Forces with armored capabilities during Kosovo&#8217;s declaration of independence from Serbia, according to Army officials.

Information on the deployment was kept under wraps until now because of the mission&#8217;s sensitivity.

In the days following Kosovo&#8217;s declaration of independence, protesters marched in the northern city of Kosovska Mitrovica. Kosovo Force troops and U.N. police closed the border with Serbia after hearing that protesters were being bused to Mitrovica to join the protest.

During the deployment 1-4 soldiers were manning Bradley fighting vehicles for the American-led Multinational Task Force East, according to 1st Lt. David Trinh, who leads 3rd Platoon, Company B, 1-4 soldiers in Kosovo.

"We provide KFOR with an armored capability should it be needed," Trinh said.

KFOR is made up of more than 1,000 U.S. active-duty, reserve and National Guard troops working with soldiers from other nations and the Kosovo Police Service to secure the breakaway nation&#8217;s border with Serbia.

There was sporadic violence after the independence declaration, but the situation is now calm, Trinh said.

"We work with the [KFOR] unit here by conducting patrols and when not patrolling, we train as if we were back home," he said.

It&#8217;s the second deployment for 1-4, which plays the Army&#8217;s opposing force, helping train Iraq and Afghanistan-bound units at Hohenfels&#8217; Joint Multinational Readiness Center. The unit&#8217;s soldiers have also fought the Taliban in southern Afghanistan&#8217;s Zabul Province, a mission that&#8217;s been going on for several years.

Trinh&#8217;s platoon maintains a 24-hour presence in its area, talking to locals and reporting their problems to KFOR, he said. "Most of the time, we try to get intelligence we can report and act on. Luckily, our sector has remained quiet and safe for the most part," he said.

Cpl. Christapher Larson, 24, of Reno, Nev., a Bradley gunner who&#8217;s previously deployed to Afghanistan, said in an e-mail that Kosovo is a very different experience.

"In Afghanistan it is hard to know who you can trust. The locals could be hiding the enemy to help them attack you. Going on patrol here is like a Sunday drive compared to Afghanistan," Larson wrote. "It&#8217;s not to say we don&#8217;t take it seriously, because we take all patrols seriously, but&#8230; this is a lot less stressful."

Another 1-4 soldier, Staff Sgt. Muhammadun Abdallah, 28, of Naperville, Ill., a Bradley commander who has been to Iraq and Afghanistan, agreed.

"In Kosovo we try to make sure that KFOR is able to help as many people as we can. Some of the problems are domestic issues. It seems the people just want to get by. No one is trying to kill you," he said.