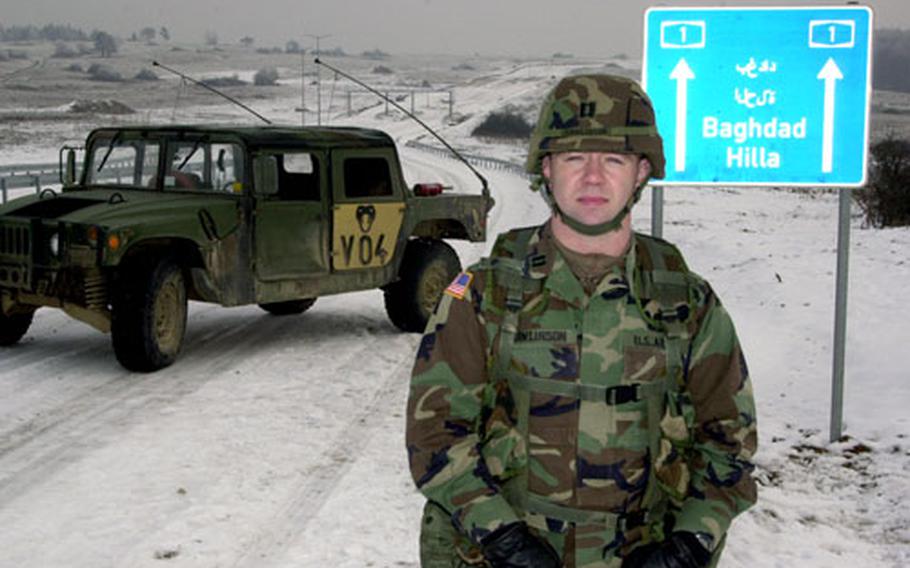 Capt. Scott Rawlinson, a public affairs officer with the Joint Multinational Readiness Center, stands on the new “road to nowhere” at the Hohenfels training area. The road will help train soldiers to detect improvised bombs in Iraq. (Seth Robson / S&S)

HOHENFELS, Germany &#8212; If it were not for the freezing temperatures and 2 inches of snow on the ground, you could be excused for thinking the stretch of newly built freeway with Arabic street signs and wrecked cars by the roadside was the road to Baghdad International Airport.

That was exactly the sensation Army trainers were aiming for when they designed a new improvised explosive device training lane at Hohenfels.

Soldiers have done plenty of IED training at Hohenfels in recent years, but lacked a dedicated facility. In the past, training there involved reacting to mock roadside bombs left along tank trails or in Military Operations in Urban Terrain sites, Rawlinson said.

The new road includes all sorts of places where insurgents might place bombs, including an &#8220;overpass&#8221; simulated by a steel walkway, on- and off-ramps, a sweeping curve obscured by trees, a &#8220;bridge&#8221; simulated by guardrails and a roundabout.

The Arabic street signs direct drivers to well-known Iraqi cities such as Baghdad, Basra and Karbala. Wrecks of soldiers&#8217; old &#8220;hoopties&#8221; rust by the roadside as stand-ins for sites of vehicle-borne bombs. Trash &#8212; often used to disguise roadside bombs in Iraq &#8212; is scattered along the road during training.

Soldiers testing their skills on the road will receive fragmentary orders requiring them to take a convoy along it, Rawlinson said.

&#8220;One of their standard operating procedures is to react to an IED. They might be looking for certain types of IEDs based on trends in their area of operations,&#8221; he said.

The Army is always looking for new ways to combat roadside bombs, a leading cause of combat fatalities in Iraq. The road was set up with the help of the Joint IED Defeat Task Force, which looks for trends and different ways to defeat the use of IEDs, Rawlinson said.

Indicators might include vehicles parked by the road, dead animals or large concrete blocks, he said.

The training road will be used for the first time this month by soldiers from the 95th Military Police Battalion, Rawlinson said.