Hobbins takes over from Foglesong as commander of USAFE 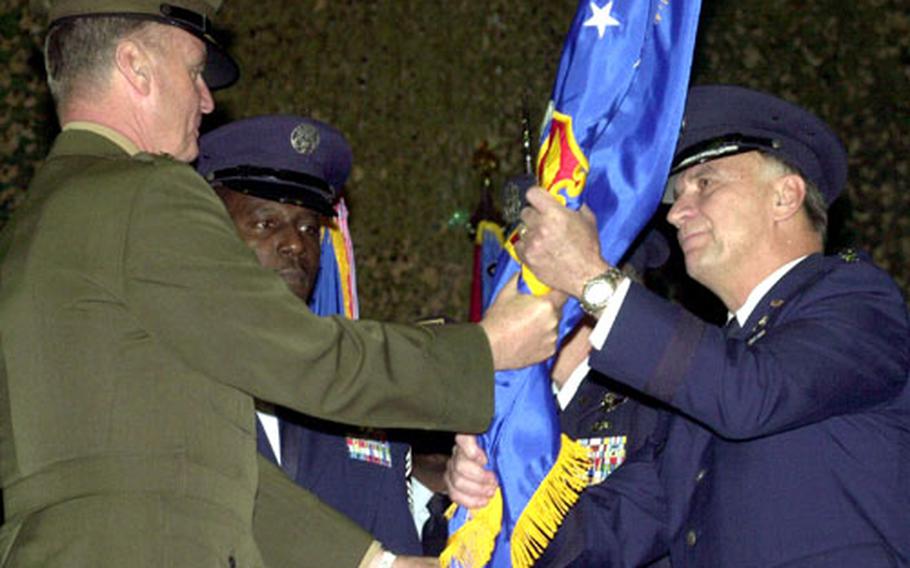 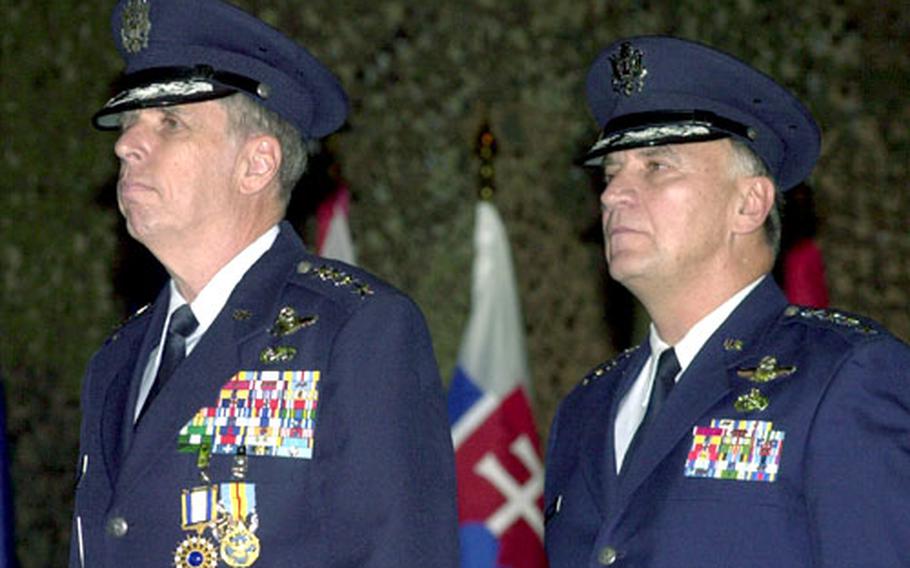 RAMSTEIN AIR BASE, Germany &#8212; Gen. Tom Hobbins became the 34th commander of U.S. Air Forces in Europe on Monday, pledging to make the command&#8217;s ability to respond on a moment&#8217;s notice a top priority.

Hobbins, a fighter pilot who most recently served as the Air Force&#8217;s top information technology chief, replaced Gen. Robert H. &#8220;Doc&#8221; Foglesong during a change of command ceremony inside one of the base&#8217;s mammoth hangars.

During his remarks, Hobbins told Marine Gen. James L. Jones &#8212; the U.S. military&#8217;s top commander in Europe and NATO&#8217;s supreme allied commander &#8212; his objective would be to provide air power anytime and anywhere.

Hundreds of airmen filled the base&#8217;s Hangar 1 for the formal ceremony for the Air Force&#8217;s top command in Europe. Many of them &#8212; wearing battle-dress uniforms &#8212; sat in bleachers set up along the hangar&#8217;s walls, which were covered with camouflage netting.

Hobbins, who served as USAFE director of operations at Ramstein between 1998 and 2000, gave his speech on a stage adorned with flags from NATO&#8217;s allied countries and promised to put a premium on information technology and capabilities.

Hobbins, who entered the Air Force in 1969, takes over for one of the most visible and recognized officers in Europe.

Foglesong served as commander since August 2003 and quickly made his mark.

He coined the command&#8217;s motto, &#8220;Bring your courage!&#8221; and founded more than a dozen quality-of-life programs. But he will probably be remembered most by servicemembers stationed in Europe for his many commercials on American Forces Network Television, which is broadcast to Americans stationed around the globe.

While both Jones and Air Force Chief of Staff Gen. T. Michael Moseley lauded Foglesong for his leadership, they joked about the frequency of Foglesong&#8217;s TV spots during the ceremony.

During his speech, Foglesong took the friendly jibes in jest and called his moment at the podium his &#8220;last AFN commercial.&#8221; Much like he has done in his many of those spots, he used his time to thank the men and women who serve in the command for their hard work.

Foglesong, who has a doctorate in chemical engineering and often goes by the call sign &#8220;Doc,&#8221; plans to retire and lead a foundation that will provide scholarships to college-bound high school seniors in his home state of West Virginia.