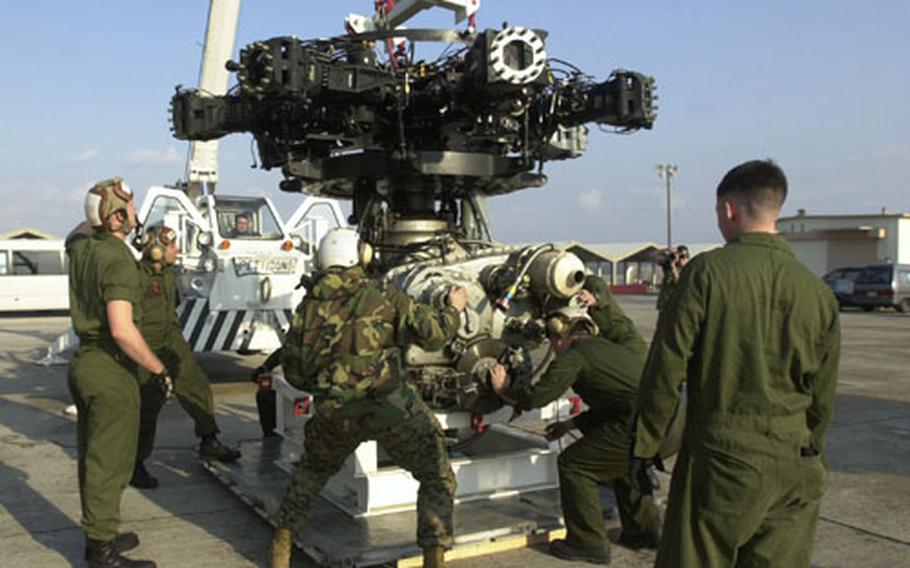 Marines from Marine Heavy Helicopter Squadron-465 position a gear box from a CH-53 onto a shipping pallet. (Fred Zimmerman / S&S)

MARINE CORPS AIR STATION FUTENMA, Okinawa &#8212; Another Marine Corps unit on Okinawa under the Unit Deployment Program is gearing up for its second trip to Iraq in less than a year.

Unit members spent last week tearing down their CH-53 helicopters and packing them up for the trip to Iraq via Air Force transport planes.

The past year has been hectic, according to Zoretic. They spent two months in Iraq before returning home late July. Zoretic said they were off in August, but in September, they began UDP training and supplied two detachments to Marine Expeditionary Units.

The unit&#8217;s main body then arrived on Okinawa in early December, and another detachment was sent to a MEU.

Zoretic first heard talk of the possible deployment to Iraq during briefings before the UDP trip with Maj. Gen. James F. Amos, commanding general of the 3d Marine Aircraft Wing. Amos told him the unit may not be on Okinawa for long.

During its short stint here, the unit has trained for the upcoming deployment, said Zoretic. He said all pilots and aircrew members were Low Light Level Night System Qualified &#8212; which the pilots think will be very useful.

Fellow pilot Capt. Adam Hyams said the unit will put its NVG training to good use &#8212; a lot of night flights are in store in Iraq.

In addition to night training, the unit also upgraded its helicopters with new defensive countermeasures, said Zoretic. He said a new gun system is also on its way and will be added to the rear of the helicopter.

Training new crewmembers and getting them prepared for their mission in Iraq has been a primary focus for the crew chiefs, said Cpl. Nicholas Sparkman.

Sparkman said the new members should expect some long missions mixed in with the constant threat of being fired upon.

With the threat they will face in Iraq and the hectic pace, Zoretic said it&#8217;s important to keep unit family members informed. He said the unit has a dedicated Web site, www.hmh-465.org, which passes on word of what&#8217;s happening.

He also said a great Key Volunteer Network and monthly newsletter help keep everyone in the loop and involved.

Zoretic said a seven-month stay in Iraq is the unit&#8217;s current plan, but rotating home sooner is always a possibility.

But it might not be the last time the unit operates in Iraq. Zoretic said a third deployment there is probable.