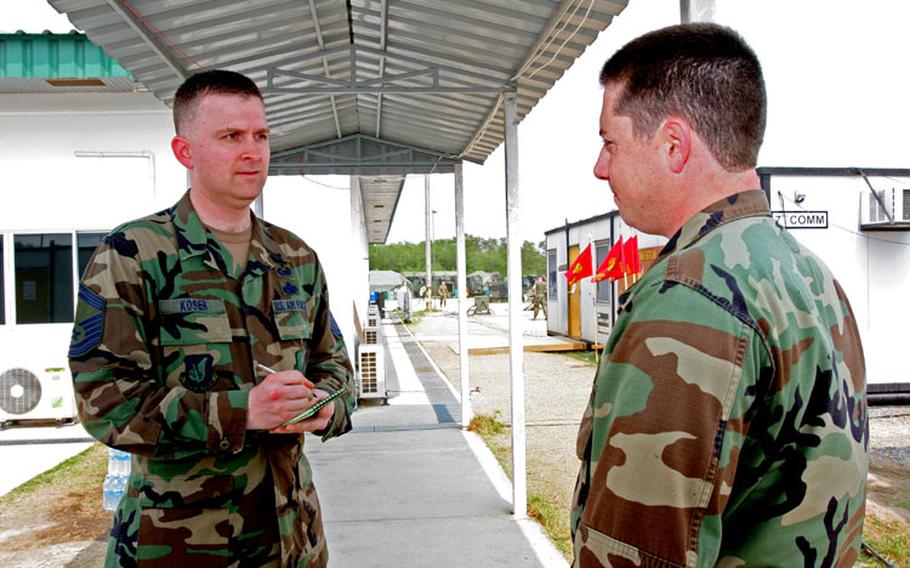 History inevitably will show Dec. 26, 2004, to be a tragic day for South Asia, if not for much of the planet.

What historical records will reveal about the U.S. military&#8217;s humanitarian efforts in response to the devastating Indian Ocean earthquake and tsunami depends in part on a sergeant from Misawa Air Base, Japan.

Senior Master Sgt. Don Koser, 35th Fighter Wing historian, is deployed to Utapao, Thailand, where he&#8217;s meticulously recording the words and deeds of U.S. servicemembers continuing to coordinate the delivery of aid into the recovering region.

Pacific Command, through Pacific Air Forces, assigned Koser as the &#8220;joint historian&#8221; for the combined military relief effort. His job is to &#8220;collect as much information as [he] can,&#8221; Koser said by telephone from Utapao last week. Though representing the Air Force, Koser is keeping tabs on all the services: His notes include lessons learned from the Marines, details about a new Navy water purification unit and Air Force ground crews sleeping on Navy ships during the mission&#8217;s first days.

Since arriving at the headquarters for the U.S. military tsunami relief operation, Koser has been working nonstop maintaining a daily record of events and catching up on the four weeks he missed.

Most of Koser&#8217;s data is stored electronically on his laptop. From a local computer server, the historian downloads daily situational reports, briefings, orders, messages, &#8220;anything that&#8217;s out there that can be pertinent to the operation,&#8221; he said. He also sits in on daily commander&#8217;s briefings and other meetings, taking notes, and interviewing key personnel.

In an interview with Marine Corps Lt. Gen. Robert R. Blackman, commander of Combined Support Force 536, Koser said his questions included &#8220;What he thinks went well, what he thinks could have been done better, any significant things (that) stand out in his mind, good or bad?&#8221;

Koser also has spoken with United Nations representatives and will document examples of cooperation between the U.S. military and nongovernmental organizations and foreign militaries also involved in the effort. The completed chronology will be sent to PACOM headquarters in Hawaii, where historians will compile a more in-depth history over the next six months to a year, Koser said.