Historic typhoon nearly wiped Philippines city off the map, but now it's building back 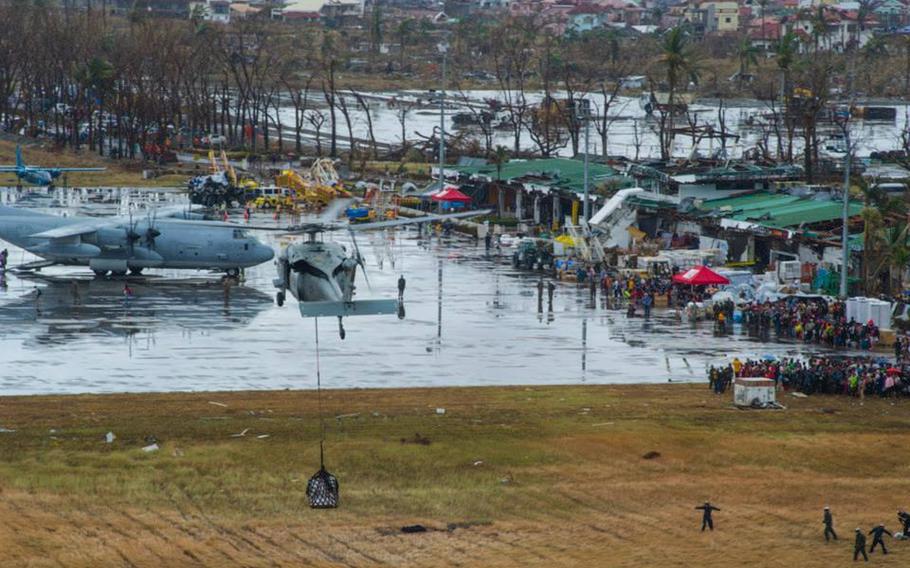 An MH-60S Sea Hawk helicopter from the Island Knights of Helicopter Sea Combat Squadron 25 drops supplies onto Tacloban Air Base in support of Operation Damayan in November 2013 in the days after the island was hit by Typhoon Haiyan. (U.S. Navy photo)

An MH-60S Sea Hawk helicopter from the Island Knights of Helicopter Sea Combat Squadron 25 drops supplies onto Tacloban Air Base in support of Operation Damayan in November 2013 in the days after the island was hit by Typhoon Haiyan. (U.S. Navy photo) Buy Photo
The carpark at Tacloban's airport, where refugees clamored for evacuation on military transport planes after last year's typhoon, is almost back to normal eight months later. (Seth Robson/Stars and Stripes) 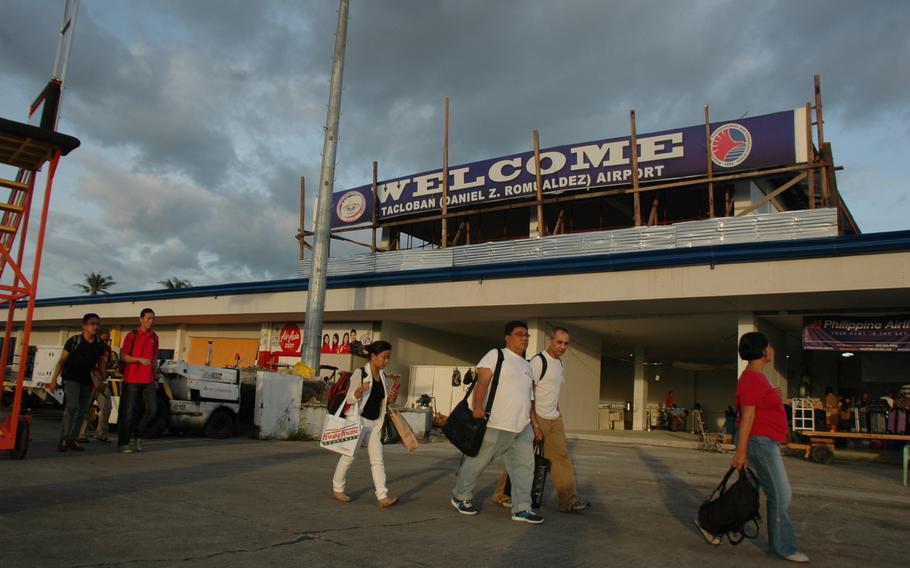 Buy Photo
Passengers arrive at Tacloban's airport in July. Repairs at the terminal, all but destroyed in during Typhoon Haiyan eight months ago, are almost complete. (Seth Robson/Stars and Stripes) Buy Photo
Repairs at Tacloban's airport, all but destroyed in last year's typhoon, are almost complete. (Seth Robson/Stars and Stripes) 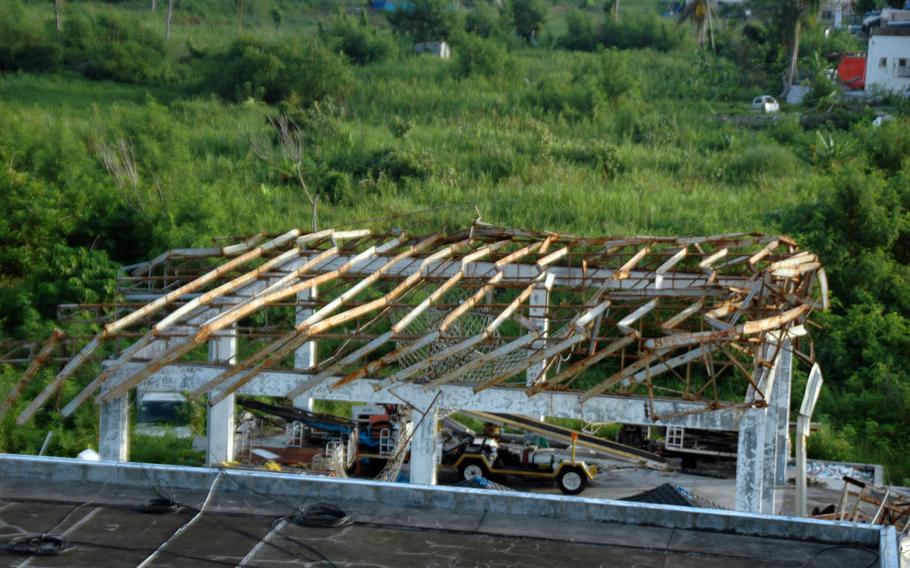 Buy Photo
Not everything has been rebuilt in Tacloban. Some buildings still lack roofs, eight months after they were blown away by Typhoon Haiyan. (Seth Robson/Stars and Stripes) 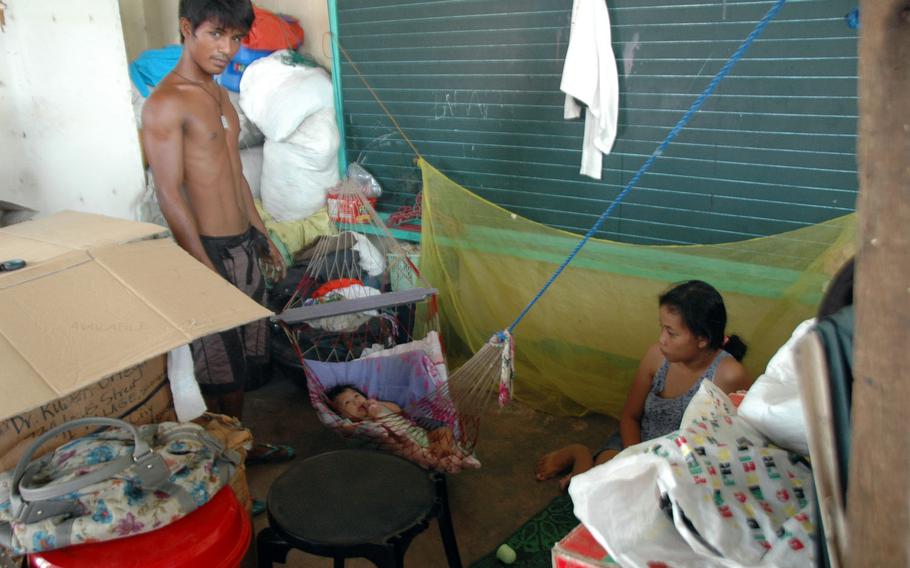 Buy Photo
This Filipino family is still living inside a schoolhouse in Tacloban, eight months after their home was destroyed by Typhoon Haiyan. (Seth Robson/Stars and Stripes) 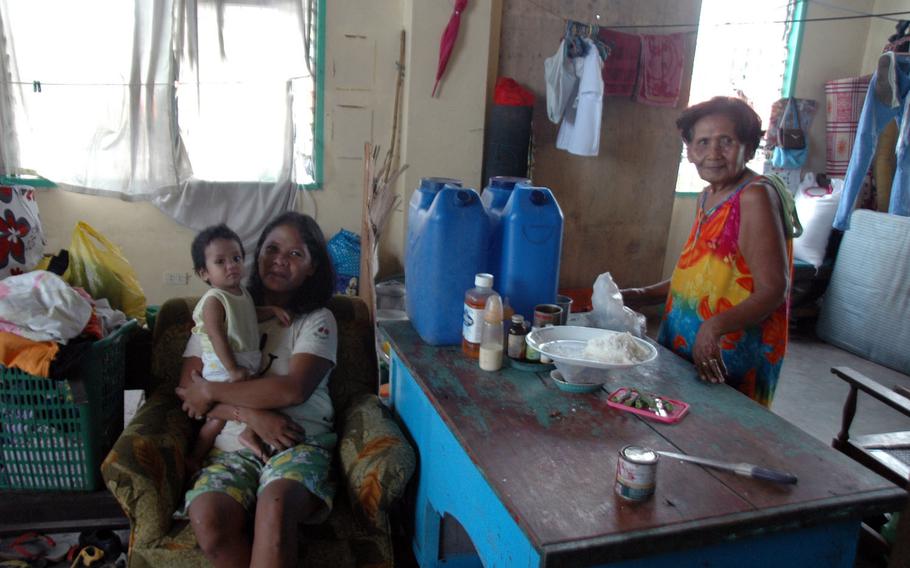 Buy Photo
Some Filipino victims of Typhoon Haiyan are still living in termporary shelters eight months after the disaster. (Seth Robson/Stars and Stripes) Buy Photo
Not everything has been rebuilt. Many buildings in Tacloban are still surrounded by debris left by last year's Typhoon Haiyan. (Seth Robson/Stars and Stripes) Buy Photo
A truck carries typhoon victim's possessions away from a recently vacated camp that served as a home for many Filipinos for the last eight months. (Seth Robson/Stars and Stripes) 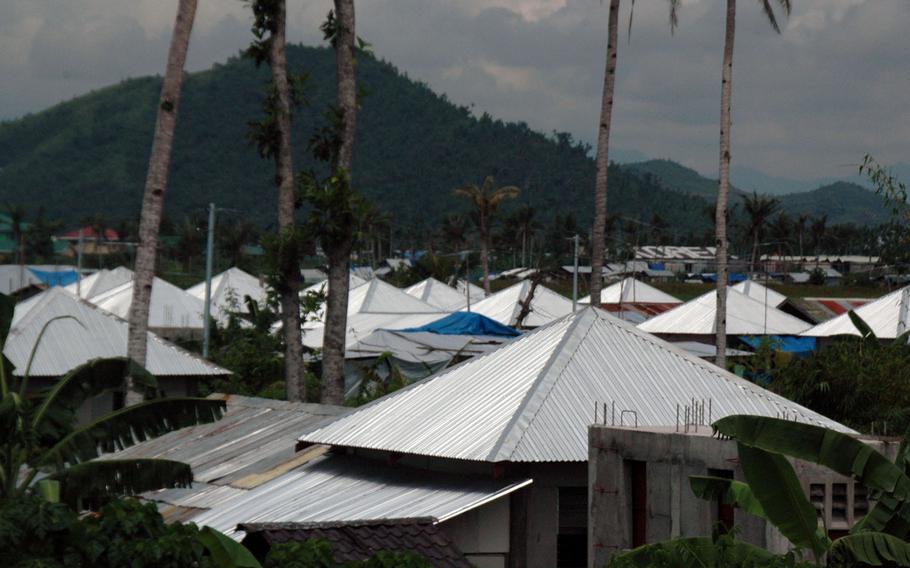 Buy Photo
Many buildings in Tacloban still lack roofs eight months after the city was struck by Typhoon Haiyan. (Seth Robson/Stars and Stripes) 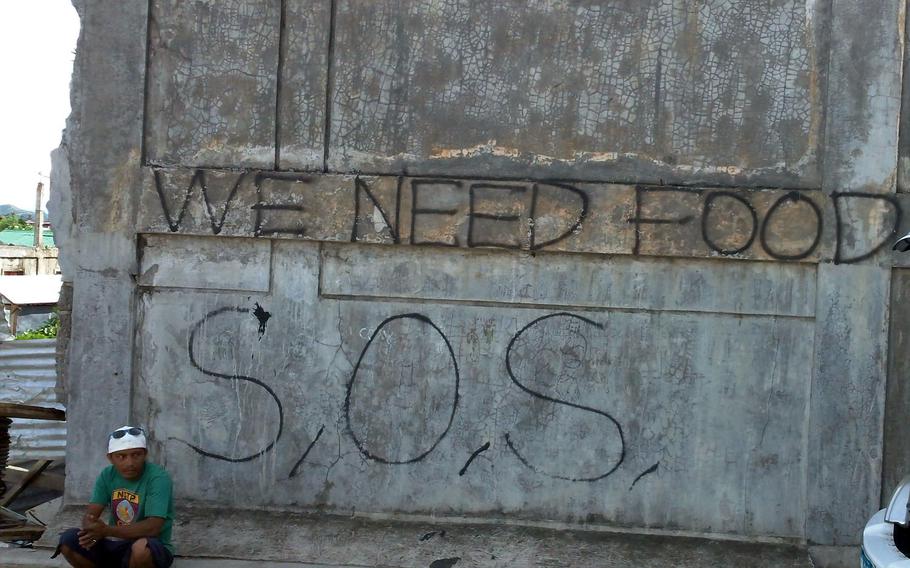 Buy Photo
Calls for help -- scrawled in the aftermath of Typhoon Haiyan -- are still visible on walls in Tacloban eight months after the disaster. (Seth Robson/Stars and Stripes) 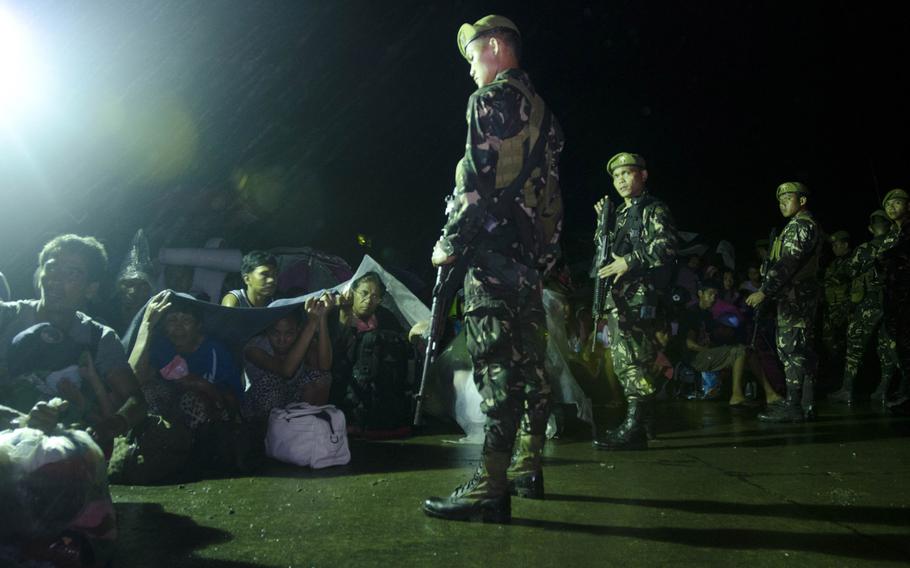 Buy Photo
Filipino Army guards maintain order among a group of typhoon victims waiting to board a flight out of Tacloban Airport bound on Nov. 15, 2013. (Eric Guzman/Stars and Stripes) Buy Photo
Victims of Typhoon Haiyan in and around Tacloban, Philippines were trying to piece their lives back together nearly two weeks after the disaster struck their city in November 2013. (Eric Guzman, Stars and Stripes) Buy Photo
Victims of Typhoon Haiyan in and around Tacloban, were still trying to piece their lives back together nearly two weeks after the disaster struck their city in November 2013. (Eric Guzman, Stars and Stripes) 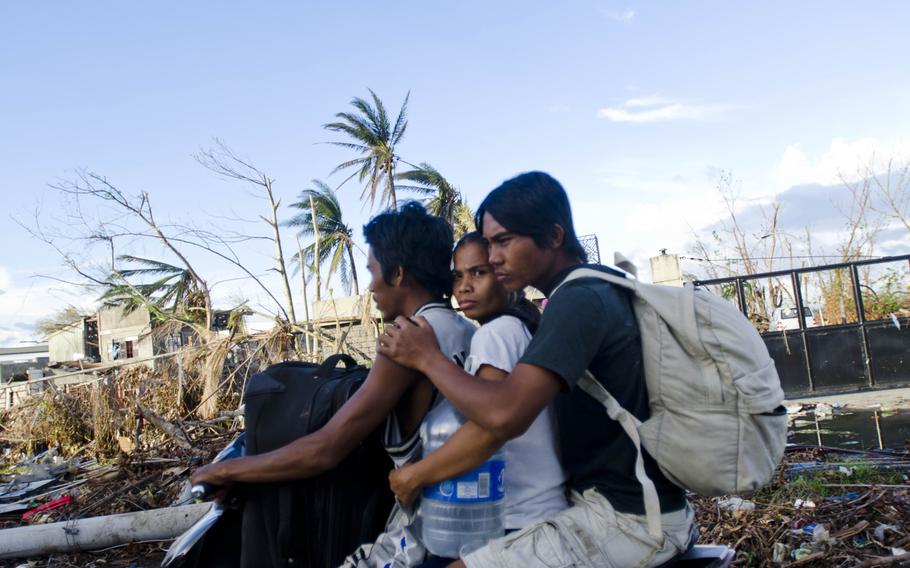 Buy Photo
Victims of Typhoon Haiyan ride through the rubble in Tacloban in November 2013, nearly two weeks after the disaster struck their city. (Eric Guzman, Stars and Stripes) 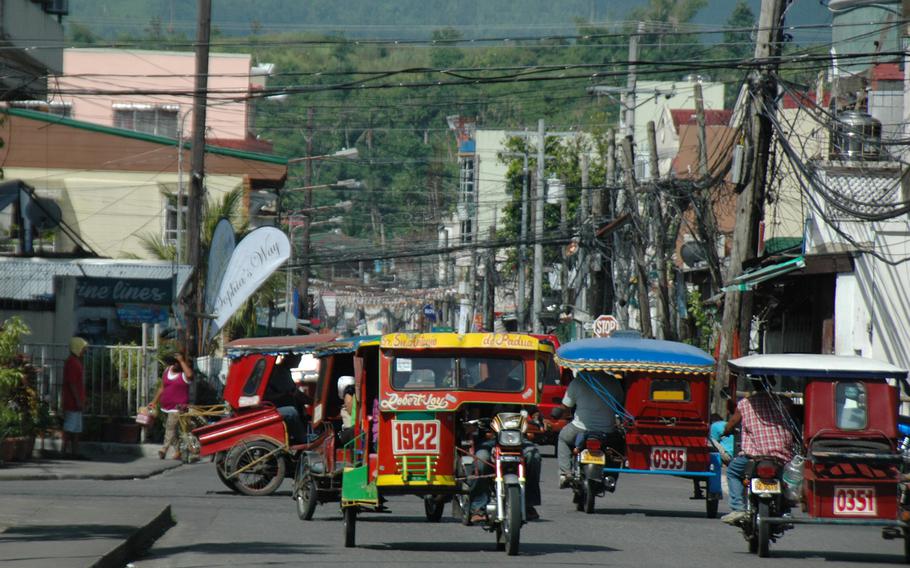 TACLOBAN, Philippines — Typhoon Haiyan nearly wiped Tacloban off the face of the earth eight months ago, leaving behind an apocalyptic wasteland of bodies, collapsed buildings and blocked streets.

Today, the city of 240,000 people in the central Philippines is bouncing back. Streets are full of traffic, children are back in school and tradesmen are hard at work patching up damaged buildings and infrastructure. Thousands of people who evacuated on U.S. military planes after the storm have scraped up the funds to go home and help rebuild shattered communities.

Those who saw Tacloban during its worst days are amazed by the transformation.

“What’s inspired me was people’s attitude and resiliency — their pride in the way they coped — accepting what happened and moving forward,” said Joyce Johnson of U.S. health service aid group Project Hope.

The biggest change has been the progress in construction, she said.

The airport was a hub for Operation Damayan — a U.S. relief effort involving 13,400 military personnel, 66 aircraft and 12 naval vessels — that delivered vast quantities of emergency supplies and evacuated more than 21,000 survivors of 100 mph winds and a storm surge of rushing seawater that reached the second floor of some buildings.

The flight line, where helicopters buzzed and thousands of frightened people, held back by armed Filipino troops, threatened to rush evacuation flights, is clear now. The main terminal, reduced to a skeleton by high winds, has a new roof and walls. A building that served as a makeshift operating theater has new windows and fresh paint.

Some of the recovery has been fostered by aid organizations like Johnson’s group and Habitat for Humanity. U.S. forces returned to do medical and engineering work earlier this month.

But Tacloban’s people deserve credit for much of the rebound.

In the city center, roads that were blocked by fallen trees and debris are filled with jeepneys and pedicabs. Piles of timber and corrugated iron fill vacant lots, but rebuilding is going on throughout the town. In most streets, workers carry construction materials and the sound of machinery and rapping hammers echoes through neighborhoods.

Tacloban Mayor Alfred Romualdez said officials have recovered 2,800 bodies from city streets although 800 are still missing. Still, much work remains: The typhoon damaged 40,000 homes in the city and left 25,000 families homeless, he said.

The city aims to build 14,000 new homes with the help of aid organizations such as Habitat for Humanity, but 1,000 people are still living in tents and another 2,000 in temporary shelters, he said.

As all this construction is going on, the city’s vibrant commercial life has returned. A trading hub with 45 banks and numerous small businesses, commuters from outlying villages swell Tacloban’s population to 800,000 during the day, Romualdez said.

For downtown businessman Neil Quintero, whose family owns the Rosvenil Hotel, things are returning to normal after months of struggle.

During the typhoon — the most powerful storm to hit the islands — the Quintero family survived a massive storm surge on their home’s second floor, but the aftermath “was like a war,” he said.

“I rode my bicycle downtown and saw looters and people running,” Quintero recalled. “I had to hit a looter with a shovel to keep them away from the hotel. There were no army and no police at that time.”

It took the family a month to clear dirt and debris from its property, but overall the disaster has benefited them because the hotel was booked solid for months by people whose homes had been destroyed, Quintero said.

These days, life in Tacloban is back on track, despite a lack of adequate public transport, he said.

Plenty of western aid workers are still active in the city.

Melissa Schilling, of Project Hope Art from San Francisco, spent part of July painting blackboards and handing out chalk to children living in the Alvarez Tent City. The tent city, which was home to 50 families, closed this month, but some residents are still living inside classrooms at the school next door.

Schilling also worked in Haiti following the 2010 earthquake. She said the efforts in Tacloban are better organized.

“Eight months later, this entire tent city got dismantled, but three years after the Haiti earthquake, there are still people living in tents,” she said.

Kids in school uniforms are a common sight on the streets; the city hosts several universities and numerous elementary and high schools.

Juliet Lugas Lim, principle of Virginia R. Pedere Elementary School in Tacloban, said 5,000 kids are back in class in her district.

Almost all of the schools in the city were damaged by the storm and one still doesn’t have a roof, but Lugas Lim said her school reopened in June and that students are doing extra work to catch up on missed classes.

School administrator Charlemagne Escobarte said aid has helped get the schools open, but there’s no government help for teachers trying to repair their own homes.

“It’s very difficult for us to return to our usual situation,” she said. “Even our own houses haven’t been repaired yet. We still have tarpaulin on our roof. We can’t afford materials.”

Teachers can’t afford to pay builders to do repairs. Demand has pushed the cost of a laborer up from about $8 a day to $13.75 a day, she said.

Hospitals and health clinics in the city, which provide care to 4 million people from the eastern part of the Philippines, are also back online. In the days after the disaster some continued to function, despite extensive damage, but they were backed up by tent hospitals and medical ships brought to the area by foreign militaries.

Eastern Visayas Regional Medical Center’s acting chief, Aileen Espina, said her hospital was badly damaged. Bodies of people swept out of homes in surrounding neighborhoods were found in the hospital grounds, but all of the patients and staff inside the building survived the storm, she said.

In the days and weeks after the disaster, Filipino troops cleared the facility of mud and debris as doctors, with the help of foreign medical staff, treated storm injuries, infections, breathing problems and high blood pressure likely caused by stress, she said.

“During the disaster response, foreign medical teams were a big help to survivors,” she said. “They really augmented our manpower and supplies since everything was washed away.”

Today the hospital is busy as some other medical facilities in Tacloban remain out of commission. There are plans to move from the 98-year-old facility to a new building in the near future, Espina said.