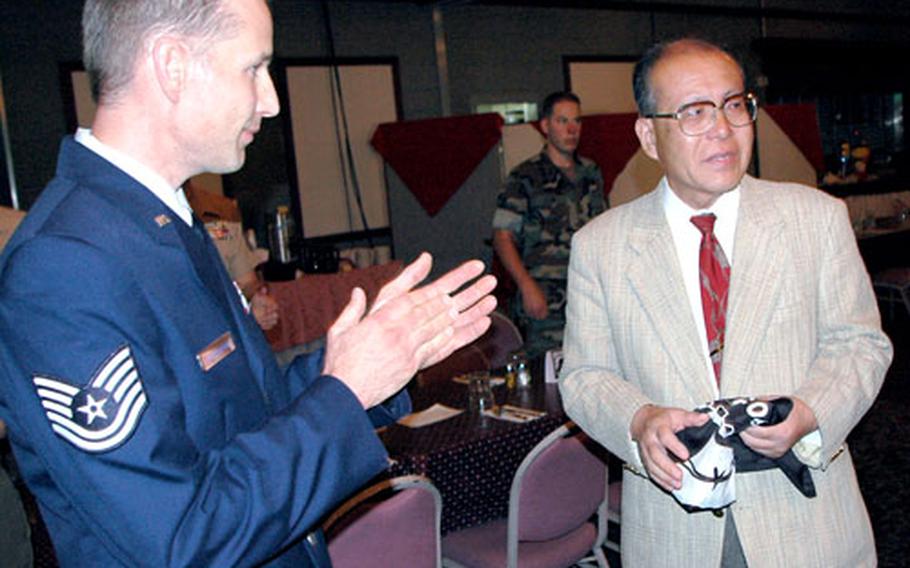 the crew of the F6 Hellcat that left the USS Randolph on July 25, 1945, headed to Kure, Japan;those aboard the SB2C Hell Diver that took off a few days later from the USS Ticonderoga; andcrews of two B-24 Liberators &#8212; Lonesome Lady and Taloa &#8212; that left Okinawa early July 28, 1945.&#8220;These are just four of dozens of aircraft that were shot down during these four days of air assaults&#8221; over Japan in World War II&#8217;s closing days, Marine Tech. Sgt. Chris Valgardson said Friday at the base&#8217;s program to mark this year&#8217;s National POW/MIA Recognition Day.

&#8220;But the survivors of these four aircraft, these dozen men, were about to find themselves members of a fraternity no one wishes to join,&#8221; said Valgardson, 374th Communications Squadron, Iwakuni Detachment. The servicemembers, captured one by one, were brought to the Chugoku Military Police Headquarters in Hiroshima &#8212; some 500 yards from what soon would be ground zero.

When the bomb was dropped, he was 8 and knew of the U.S. prisoners, Valgardson said, because he was a pupil at a school next to the police headquarters.

Mori survived; the Americans did not.

Some three decades later, Mori &#8220;set out to research their fate,&#8221; the event coordinator said.

He contends that of 20 Allied servicemembers whose deaths may be attributed to the atomic bombs, 12 were U.S. POWs in Hiroshima. In 1998, he erected a copper memorial plaque on a building at the site where the POWs were detained.

&#8220;I believe those up there (spirits of victims) will appreciate your prayers offered to them,&#8221; Mori told the audience.