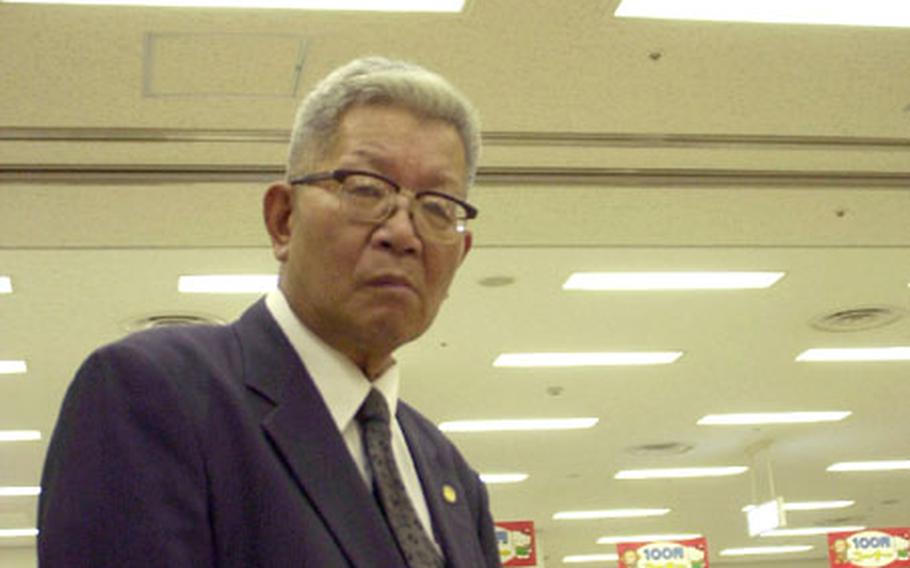 Minoru Furuta was a 6-year-old boy living in Hiroshima, Japan, on Aug. 6, 1945, when the Enola Gay dropped an atomic bomb on the city during World War II. The blast killed an estimated 220,000 people, but he survived and later joined the U.S. Air Force. Now 65, Furuta lives in Fussa City and works on the management staff at the 100 Yen Shop inside the Yokota Community Center. (Vince Little / S&S)

YOKOTA AIR BASE, Japan &#8212; Minoru Furuta was born in America, raised in Japan and graduated from high school in California. He&#8217;s worked in the Netherlands, England, Switzerland and Germany. In the U.S. Air Force, he served in Vietnam, posed for photos with President Kennedy, attended a nuclear-weapons school in New Mexico and claims to have cheated death at least seven times.

But nothing in his life is as seared in his memory as the images from Aug. 6, 1945. That was the day he survived the nuclear bomb the United States dropped on Hiroshima.

On that August morning, the Enola Gay, a U.S. B-29 bomber, loosed an atomic holocaust on Hiroshima, effectively ending World War II with a blast that leveled the city and killed an estimated 220,000 people. Furuta was 6 at the time, living in Funaeiricho City, just across the river and less than a mile from the impact area.

In 1941, with the United States on the brink of entering the war, Furuta said he was sent to live with relatives &#8212; a woman and her 4-year-old son &#8212; on the outskirts of Hiroshima. His parents remained in America with an uncle and aunt but soon were placed in an Arizona internment camp.

The first atomic bomb ever used in war exploded with the force of 12,000 tons of TNT, historians say. The heat from the explosion topped 50 million degrees Fahrenheit at the fireball&#8217;s center.

Because Furuta and his relatives were underneath the collapsed house afterward, he said, they were not exposed to the toxic flames that consumed the city. Those above ground suffered radiation burns.

Furuta said he was trapped until about 4 p.m. that afternoon, when he managed to free himself from the debris.

Looking down, he noticed his index finger dangling limply, attached only by the skin that held it on his right hand. It had likely been sliced by flying glass, he said.

He found a man standing outside, grasping a stick that extended from the ground up to the middle of his chest. He remembers asking for help, but soon made a horrific discovery.

So the young boy, acting on instincts, began pulling away the home&#8217;s wreckage to free his family.

The bridge separating his house from Hiroshima was destroyed. The river, he recalls, contaminated by radiation, was filled with dead bodies. The large, emergency water tanks set up in various neighborhoods were stacked high with more people who had fought to access them.

The seven rivers dividing Hiroshima got tides from the ocean.

He wound up at a Red Cross facility set up in Eba, in another section of the city, and a nurse put a splint on Furuta&#8217;s nearly severed right finger. At about 5 p.m., just before darkness, he and his two relatives went to Koi, where he received a single bowl of rice.

Later that night, they took a 90-minute train ride to a village called Kawane-mura, where the woman&#8217;s in-laws lived. Without any extra clothing or supplies, she and the two boys took refuge in a water well house outside the home.

The woman&#8217;s husband, who&#8217;d gone to work at a cracker factory in Hiroshima before the bomb was dropped, was still missing. Every other day, they&#8217;d return to the city to search for him.

The woman&#8217;s husband never was found, and about a month later, the woman died, Furuta said. The two boys soon developed symptoms of radiation sickness, lapsing frequently into unconsciousness.

On the morning of the woman&#8217;s death, he said, the neighbors found a sanshouo fish next to the water house. The creature, shaped like an alligator, is widely known in Japan and can crawl on hands and feet.

&#8220;A neighbor caught it and made soup out of it,&#8221; Furuta recalled. &#8220;They poured the soup into our mouths every hour. The following day, our temperatures went down, and we were able to walk around.

For the next four months, he said, the two boys lived in the main house. But infections began appearing, and Furuta&#8217;s hair started falling out.

Sent back to Hiroshima about six months later to live with a great uncle, Furuta spent the next six years getting various checkups and treatments aimed at rebuilding his strength and fighting off the infections. At age 11, he received penicillin shots for 200 straight days.

His joints became infected, and led to chronic pain that plagued him for decades.

Before turning 18, Furuta opted to return to America to maintain his U.S. citizenship. As a high school senior in El Cerito, Calif., with poor English skills, he said, he befriended a physics teacher who&#8217;d once flown B-29 reconnaissance missions over Hiroshima. The man showed him photographs of the city before the bombing.

Drawing on the teachings of a Buddhist minister he visited as a boy growing up in Japan, Furuta says he found the ability to forgive, and that became the foundation for his life.

Furuta said he briefly attended the University of California at Berkeley but joined the U.S. Air Force in 1959. He spent 20 years in the military, serving in such places as Vietnam, England and Okinawa. He retired as a technical sergeant.

He said he was motivated by a simple desire.

&#8220;There were hardships in the military and a language barrier. But I got through somehow.&#8221;

And he lived to tell about it.