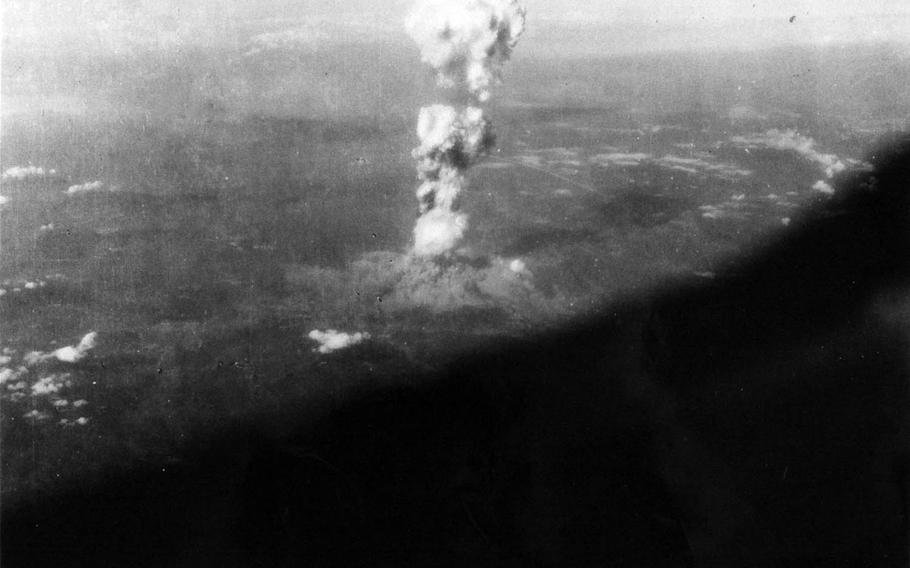 The Hiroshima Peace Memorial Museum has unveiled 10 newly discovered photographs related to the city’s 1945 atomic bombing, including one of the mushroom cloud taken from the Enola Gay.

That image from the Library of Congress is believed to be the third photo of Hiroshima’s atomic cloud taken by the B-29 Superfortress crew, said museum curator Ryo Koyama.

The photo shows what looks like the frame of an airplane window and the entire mushroom cloud rising over the Japanese city. The cloud is in two sections with a horizontal split between the sections, a characteristic visible immediately after a nuclear weapon is detonated.

“With the new photograph, we can compare and examine how the mushroom cloud changed,” Koyama told Stars and Stripes Thursday via telephone. “It also showed that there is a chance of finding more photographs and that it’s worth searching for.”

The images are the result of an exhaustive search by Koyama and another staff member, who traveled to the U.S. last November to look for photos related to the bombing at the Library of Congress, the Naval History and Heritage Command in Washington and the National Museum of the U.S. Air Force at Wright-Patterson Air Force Base in Dayton, Ohio.

The pair sent back more than 2,000 images to compare to the museum’s collection, which is estimated at 70,000 photographs.

Many of the photos turned out to be duplicates of ones already in the museum’s collection, Koyama said.

Koyama, who believes about 100 photos they discovered were previously unseen by the general public, said it’s rare to discover something totally new.

“There must have not been many people that went to the Library of Congress to look for these kinds of photographs,” he said.

Other photographs the museum displayed Tuesday show Hiroshima after the bombing and U.S. servicemembers visiting the devastated city.

Koyama said many of the newly discovered photos had been donated by elderly veterans during the 1990s and 2000s, and more may follow.

The museum plans to upload its entire photo collection to an online database in the future.