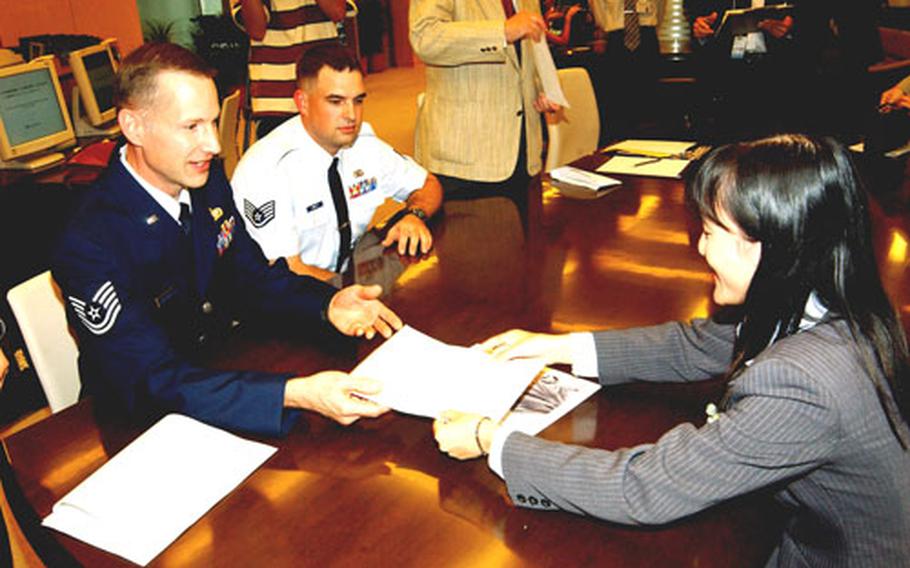 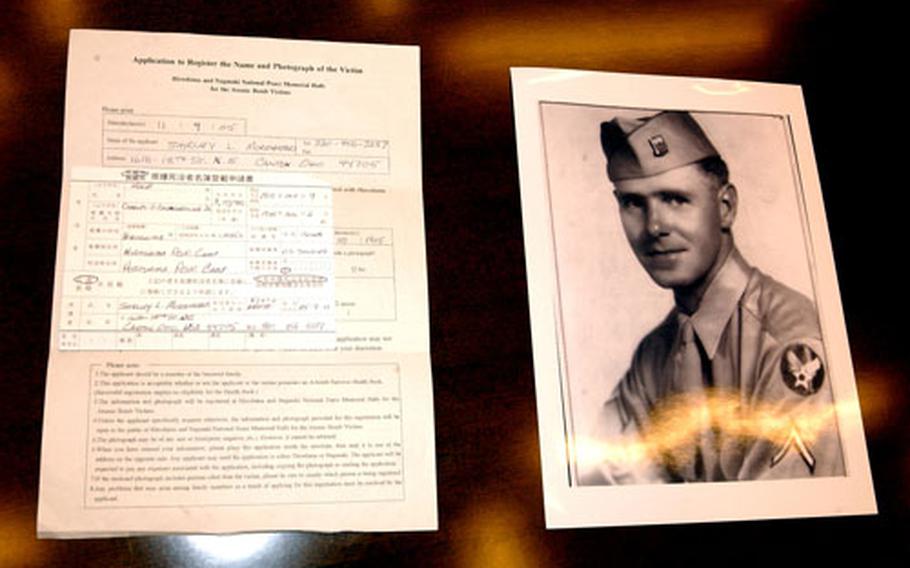 Air Force Staff Sgt. Charles O. Baumgartner, shown at right, was listed officially as a victim of the atomic bomb dropped on Hiroshima on Aug. 6, 1945. The application for including him among recognized victims is at left. (Cristin K. Bartter / U.S.)

Imagine the stark horror of stepping on a land mine and hearing a trigger mechanism click, then imagine how it must have been amplified nearly beyond comprehension for Air Force Staff Sgt. Charles O. Baumgartner Jr.

A Japanese historian contends Baumgartner knew &#8220;a powerful bomb&#8221; would be dropped on Hiroshima when the Japanese took him prisoner 10 days before the city was destroyed, killing an estimated 140,000 people almost instantly.

The death toll included 12 American prisoners of war, including Baumgartner, a ball-turret gunner of the B-24 bomber Taloa, said Hiroshima historian Shigeaki Mori.

Mori has successfully tracked down relatives and the stories of nine American POWs and completed paperwork necessary to have their names added to records kept at the Hiroshima National Peace Memorial Hall for Atomic Bomb Victims.

Baumgartner&#8217;s name was added Thursday in a ceremony at the hall attended by Mori and Marine Corps Air Station Iwakuni&#8217;s Air Force Tech. Sgt. Chris Valgardson and Air Force Staff Sgt. Chad Smith, both from the base communications division.

&#8220;Not many Americans have or will ever see such an event. And I have become increasingly impressed with the effort Mori-san has put into his efforts to make sure the American victims are also remembered.&#8221;

Mori has spent almost 30 years locating relatives of American POWs who died after exposure to the atomic blast. As a boy, he attended elementary school across the street from the building where the POWs were detained. When the bomb was dropped, he was in another city and spared.

To register a victim at the Peace Memorial Hall, an application must be made by a relative.

Mori said records of interviews indicate Baumgartner knew about the U.S. plan to drop a new kind of bomb on Hiroshima when he was captured 10 days before the Aug. 6, 1945, blast.

His airplane with a crew of 11 took off from Yomitan Airfield on Okinawa in July 28 to attack the Japanese warship Haruna but was shot down over a mountain west of Hiroshima. Six crewmembers died in the crash, while the rest parachuted. Two then were killed and three, including Baumgartner, were captured and taken to Chugoku Military Police Headquarters in Hiroshima.

Although he&#8217;s still attempting to register three more American POWs, museum officials said, 242,437 people were registered as of Aug. 6, 2004, as victims of the bomb.

Mori hopes to contact relatives of John J. Hantschel, shot down in a fighter plane, as well as Buford J. Ellison, an engineer from Texas, and Ralph J. Neal, a ball-turret gunner from Kentucky, both from the B-24 Bomber Lonesome Lady shot down in Hiroshima.