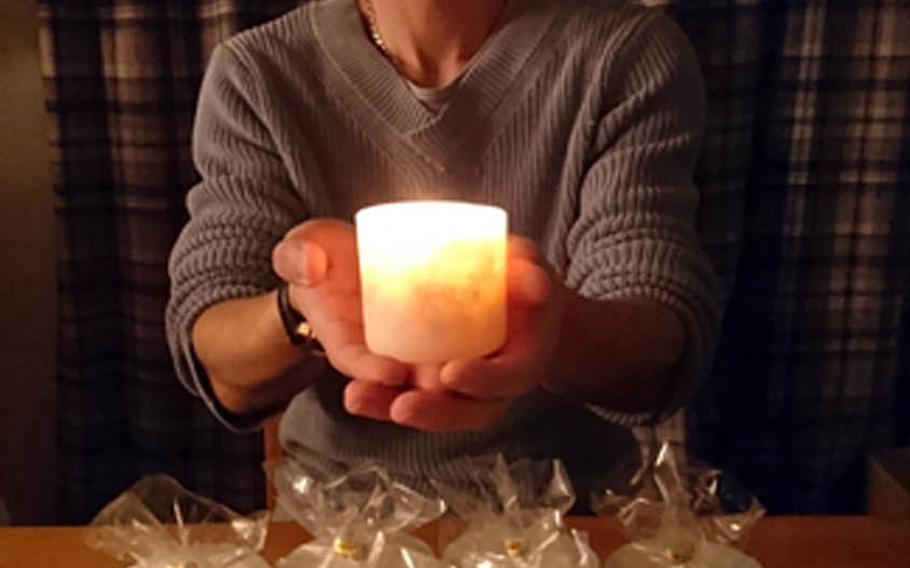 Eric Billingsley, 43, of Hiroshima holds one of his Hiroshima Candles, which incorporate pieces of origami cranes left at Hiroshima's Peace Memorial Park into their wax. (Courtesy of Eric Billingsley)

Eric Billingsley, 43, of Hiroshima holds one of his Hiroshima Candles, which incorporate pieces of origami cranes left at Hiroshima's Peace Memorial Park into their wax. (Courtesy of Eric Billingsley) 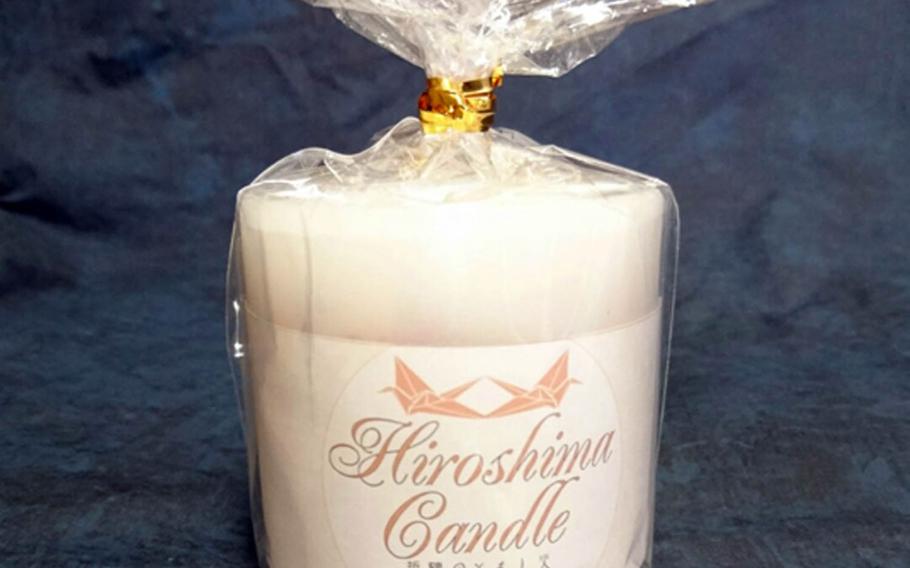 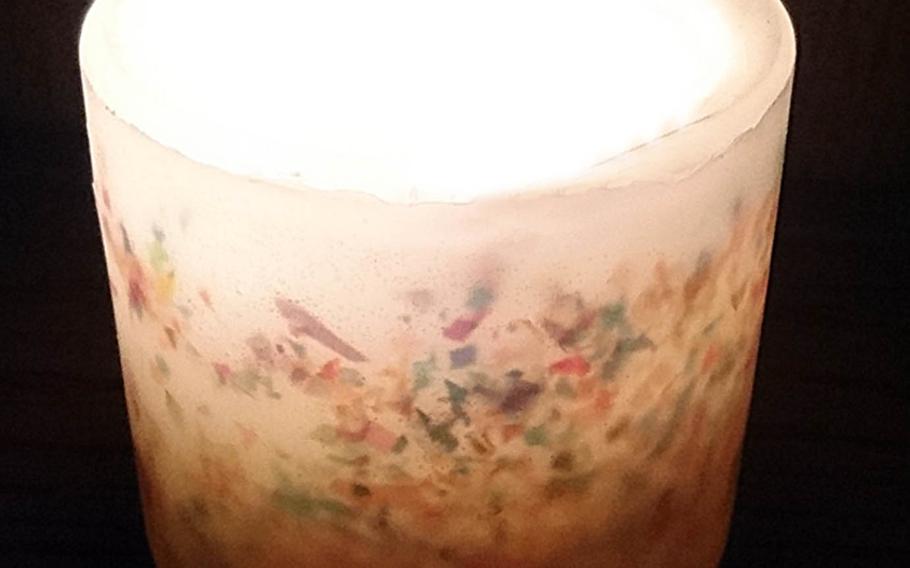 About a year ago, a Hiroshima man started a small candle business that would bring him in contact with both Japanese atomic bomb survivors and the families of American WWII servicemembers who died in Hiroshima. (Courtesy of Eric Billingsley) 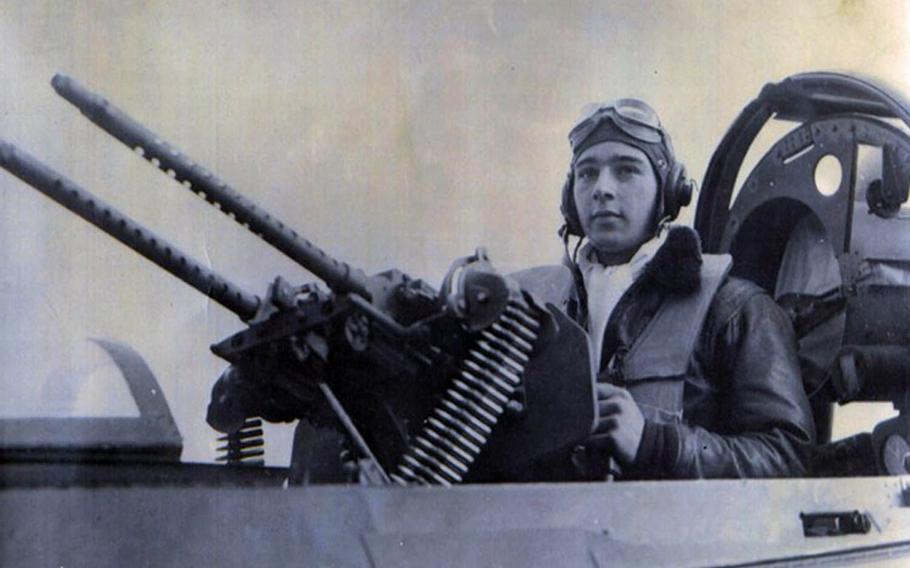 Navy Airman 3rd Class Normand Brissette, 19, a gunner from Massachusetts, was captured after being shot down in his SB2C Helldiver over Japan on July 28, 1945. He was taken to Hiroshima for interrogation where he experienced the atomic bombing on Aug. 6, 1945, with 11 other American prisoners. (Courtesy of Susan Brissette Archinski) 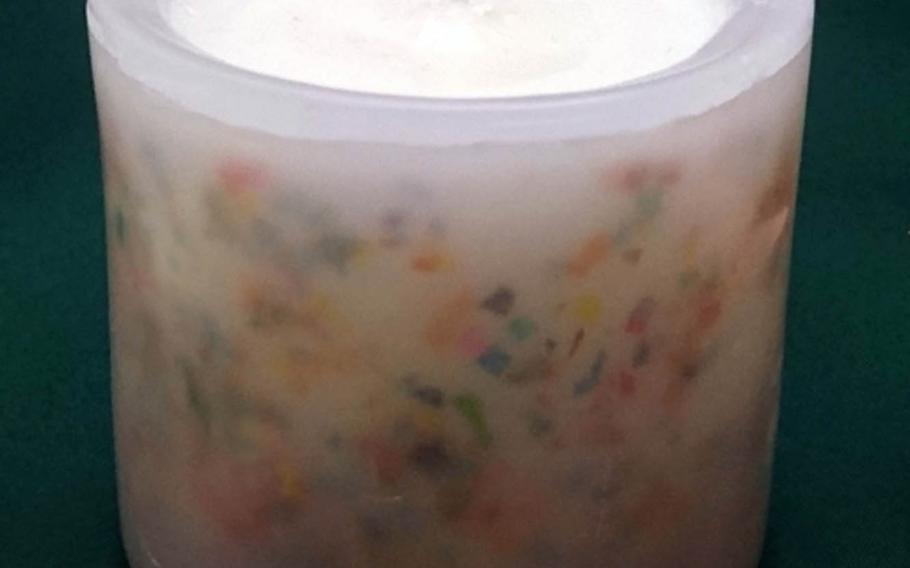 CAMP FOSTER, Okinawa — Eric Billingsley has long struggled to come to grips with the brutality and human suffering inflicted upon Americans and Japanese during World War II.

About a year ago, the 43-year-old Hiroshima resident — the son of a U.S. airman and Japanese mother — started a small business that would bring him in contact with Japanese atomic bomb survivors and the families of American WWII servicemembers who died in Hiroshima.

“I have both U.S. and Japanese blood, and both countries have fought in the past,” Billingsley said. “Had it not been for the peace we enjoy today, my daughters, my family and I myself would not be in existence.”

Billingsley, a photographer and graphic designer, got the idea for Hiroshima Candles about a year ago after seeing a pile of scrap origami paper from the Hiroshima Peace Memorial Park at a friend’s office.

Each year, about 10 tons of origami paper cranes wind up at the park from visitors and others around the world, according to Hiroshima City officials. Paper cranes are a symbol of peace to atomic bomb survivors in Hiroshima and Nagasaki thanks in large part to the sorrowful tale of Hiroshima survivor Sadako Sasaki.

Sasaki received 1,000 paper cranes as a get-well gift while battling leukemia in a Hiroshima hospital 10 years after the bombing. The 12-year-old began making cranes with the traditional belief that folding 1,000 would make her get-well wish come true. She died eight months later, before reaching her goal. A statue of Sasaki holding a crane stands in the central area of the Hiroshima Peace Park, dedicated to the children who died of radiation sickness from the bombing.

Barack Obama, the first sitting U.S. president to visit Hiroshima, folded cranes for the park’s museum last year. Two of them are still on display there.

The city gives individuals or groups permission to reuse the paper as long as their pursuit contributes to world peace.

For Billingsley, the recycled paper symbolizes the thoughts and prayers dedicated to about 140,000 people who died as a result of the bombing. He wanted to capture that sentiment within his candles.

The lantern candles consist of two types of wax. The center melts at a lower temperature, while the outer layer, which includes tiny pieces of the cranes, has a higher heat resistance. So far, he has made about 70 of them.

The candlemaker’s mission expanded earlier this year, when he watched a news program about 12 American POWs killed by the atomic bombing of Hiroshima on Aug. 6, 1945.

Nine days before the bomb was dropped, the U.S. military launched an aggressive air raid west of Hiroshima, targeting munitions factories and warships. It left the Japanese fleet in tatters, but 22 U.S. aircraft were shot down.

Some of the Americans parachuted to safety; 12 were taken as prisoners to sites around Hiroshima.

Historians believe that about half of the 12 men survived the bombing. Some were seen wandering the city in agony afterward. Others were reportedly killed by angry Japanese residents.

The story drew Billingsley to “Paper Lanterns,” American filmmaker Barry Frechette’s 2016 documentary about U.S. families of the dead making the journey to Hiroshima.

Deeply moved by the film, Billingsley wanted to do something for those families.

His wife suggested sending them his candles as a way of honoring the men.

US POWs who died in HiroshimaFrom the B-24 bomber Lonesome Lady:

John J. Hantschel, 23, of Wisconsin, ensign “I was afraid [their families] might be bewildered by getting a candle from a total stranger,” he said last month during a phone interview from his Hiroshima studio. “I see that closure has yet to come to them, but if my candles can fill even 0.1 percent of the void left by the loss of their loved one, it serves the purpose.”

Mori, who spent his life researching the men and getting their names added to the official register of the dead, sent Billingsley addresses for five of the 12 families.

The other families could no longer be located — except for one, which asked not to be contacted.

“I found the candles very precious because they manifest [Billingsley’s] sincere thoughts and wishes for world peace,” Mori said.

Billingsley has received four letters thanking him for the gifts.

“I think they are beautiful and have so much meaning,” said Susan Brissette Archinski, niece of Navy Airman 3rd Class Normand Brissette, who was 19 when he died. Archinski did not receive a candle, but Brissette’s sister got one at her nursing home. Archinski plans to buy one for herself.

“It’s a wonderful thing that people recognize everybody” who died in the blast, not just the Japanese victims, she said. “It’s pretty amazing.”

Hiroshima Candles are available at the Orizuru Tower complex in the memorial park, Billingsley said.

You can order candles by emailing Billingsley at e.i.syndicate@gmail.com. Packing and postage are extra.

“If the candles I make help to lighten someone’s spirit, I will continue to make them,” he said.