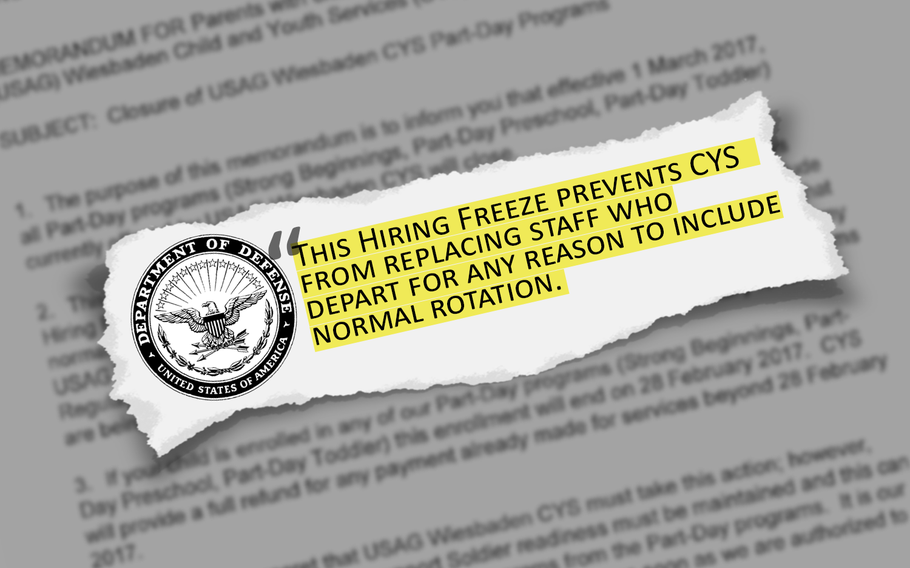 Children and Youth Services at U.S. Army Garrison Wiesbaden, Germany, will be restricted starting March 1, 2017, due to a hiring freeze that has caused staffing shortages. A similar cutback will take place at the CYS in Fort Knox, Ky. (Stars and Stripes)

Officials have been forced to indefinitely suspend some child care programs at U.S. Army Garrison Wiesbaden and Fort Knox, Ky., to compensate for staffing vacancies they can’t fill because of the measure.

Wiesbaden officials began notifying parents on Tuesday that three part-day programs for toddlers and preschoolers would be canceled effective March 1.

A letter was “handed to us yesterday when we picked up our daughter from school,” said Emily Bewley, an Army spouse at Wiesbaden, on Wednesday. “We had no warning that this was coming.”

Bewley’s 3-year-old daughter attends the part-day toddler program on base. She goes two days a week for a total of six hours, giving Bewley, who’s married to an Army warrant officer, time to concentrate on her home business, she said.

Jane Calvas, an Army spouse at Wiesbaden, said her 4-year-old daughter is enrolled in Strong Beginnings, a preschool program.

On Tuesday, “it was heartbreaking to walk in there,” she said. The program director was “standing there, holding the memorandum crying. It’s very sad for everyone involved.”

The notice says the closure is a result of the federal hiring freeze. Officials are unable to hire new staff to replace employees who depart, including those who move as part of normal military rotation. The part-day programs are being closed to sustain the full-day child care programs, deemed essential for military readiness, the letter says.

Jacob Corbin, a base spokesman, said seven part-time providers are being moved to the full-time program. About 100 military and civilian families are affected by the part-day closures, he said.

“There’s always rotations within the military community,” he said. “We have people that are going that haven’t been replaced yet. In order to meet our ratios in the full-time classes, we had to close those (part-time) classes for right now.”

At Fort Knox, families were notified on Friday of the suspension to on-base part-day child development center programs, the hourly-care program and the enrollment of new families into the center, according to a report in Military.com.

The suspension of new enrollments was effective immediately, while part-day and hourly care was to stop Feb. 27, the report said.

“We are prevented from bringing new caregivers on board but are still having our usual staff turnover and illnesses, which creates challenges to maintaining ratios and providing quality child care,” the Fort Knox letter said, as cited by Military.com.

A spokesman at Fort Knox said he was to refer all queries about child care to Installation Management Command. IMCOM public affairs could not be reached before deadline Wednesday.

Trump implemented a three-month civilian hiring freeze on Jan. 23 by executive order with the aim of stemming the growth of government while his administration created a longer-range plan to reduce the federal work force.

Although a Feb. 1 Defense Department memo exempts some civilian workers from the freeze, including military child care workers, approvals for those exemptions are taking time to work their way up through higher channels, officials said.

Corbin said an exemption for child care positions at Wiesbaden had been requested, but he didn’t know where it was in the approval process.

Bewley said she was frustrated by an executive policy that’s having a negative effect on her family and others.

“I understand the need for government to be better funded and the budget to be better controlled but there was a better way to do this,” she said.

Alexander McCoy, a spokesman for Common Defense, a grass-roots organization representing thousands of U.S. veterans and military family members, said the hiring freeze is “a betrayal of the military community and the promises that Donald Trump made. This is another example of reckless and ill-thought executive orders having negative impacts on real people.”