'Hill Climbers' do the heavy lifting 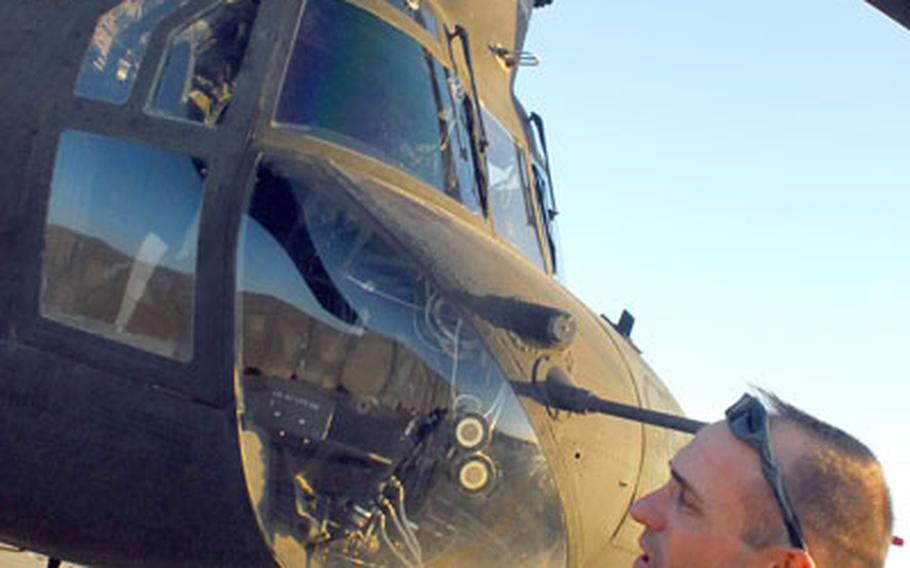 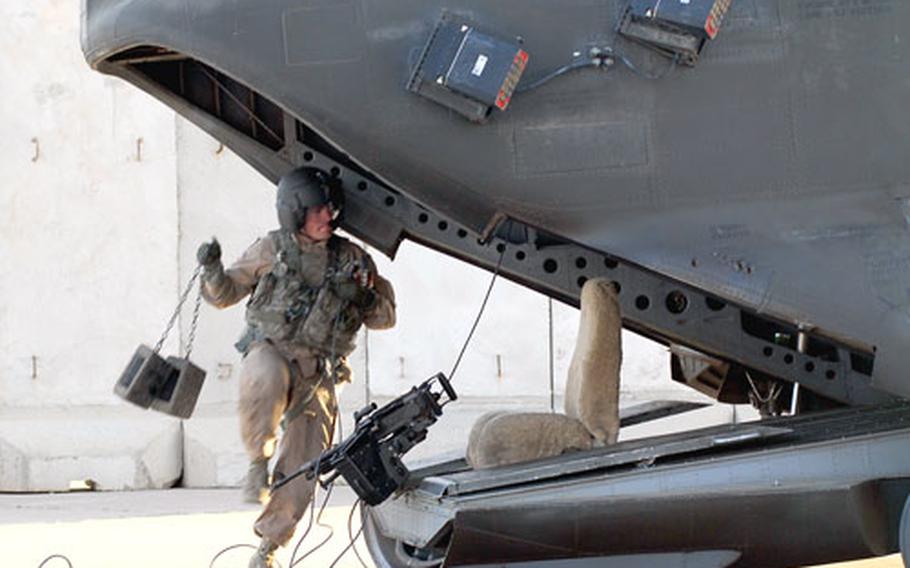 A Chinook helicopter crewmen pulls chock-blocks from the aircraft&#39;s wheels and scrambles aboard during a recent speed training exercise at Contingency Operating Base Speicher. (Monte Morin / S&S) A CH-47D Chinook lifts off from Contingency Operating Base Speicher. (Monte Morin / S&S)

TIKRIT, Iraq &#8212; In the vast expanse of northern Iraq, where craggy mountain ranges and lush rolling plains compete for terrain with sere desert scrub, the surest way of getting from Point A to Point B to Point C in a hurry is by helicopter.

Whether it&#8217;s a platoon of Iraqi soldiers staging an air assault on the outskirts of oil-rich Kirkuk, a shipment of bomb disposal robots destined for Mosul, or a crowd of soldiers, translators and civilian contractors headed for duty in Tal Afar, Task Force Hammerhead is their ticket to both the friendly and unfriendly skies.

The newly formed 3rd Battalion, 25th Aviation Regiment is the workhorse of the Hawaii-based 25th Infantry Division&#8217;s Combat Aviation Brigade, and its daily &#8220;Lightning Express&#8221; runs help ferry troops and loads of equipment throughout Multi National Division-North &#8212; an area slightly larger than the state of Pennsylvania.

Much of that heavy lifting is done by the 3-25&#8217;s Company B &#8220;Hill Climbers,&#8221; whose CH-47D Chinooks can heft loads as heavy as 25 tons. While the massive, twin-rotor aircraft are far less sleek than the sporty Apache or Black Hawk helicopters, Chinooks are actually the fastest helicopters in the Army&#8217;s inventory.

Most recently, the helicopters were used to help ferry more than 1,000 Iraqi soldiers to the outskirts of Kirkuk, where they cleared several villages of suspected insurgents and illegal weapons. The villages, roughly 20 miles south of the city, were reported to be a base of operations for local insurgents.

The majority of missions, however, involve the hauling equipment and passengers to bases throughout the north.

Those missions are dubbed &#8220;Lightning Runs&#8221; in honor of northern Iraq&#8217;s Task Force Lightning and occur at night when the loud and lumbering Chinooks present a nearly invisible target to insurgents. Helicopter crews have reported a number of instances of hostile fire at helicopters since they arrived in Iraq several months ago, but the unit has yet to lose an aircraft.

Because they fly at night, Hill Climber pilots and crewmen see little daylight.

For much of their workday, Cantu and his fellow pilots and flight crew view the world through the shimmering green lenses of night-vision goggles &#8212; a world of ghostly shadows and bright infrared spotlights.

&#8220;We call it going out in the green air,&#8221; joked Sgt. First Class Geoff Hubbard, a flight engineer and instructor.

Last week, a number of Hill Climber pilots and crewmen lingered in the light of day after their mission when the 3-25 celebrated its first birthday. The battalion was created only a year ago as part of the U.S. Army&#8217;s restructuring.

The unit is based at Wheeler Army Airfield in Hawaii, and the birthday celebration featured a luau theme. Soldiers wore Aloha shirts, grilled steaks, threw horseshoes, played volleyball and competed in a back-breaking &#8220;Chinook pull&#8221; competition. Two teams of 10 soldiers each grabbed a rope and competed to pull a 16-ton helicopter over a finish line.