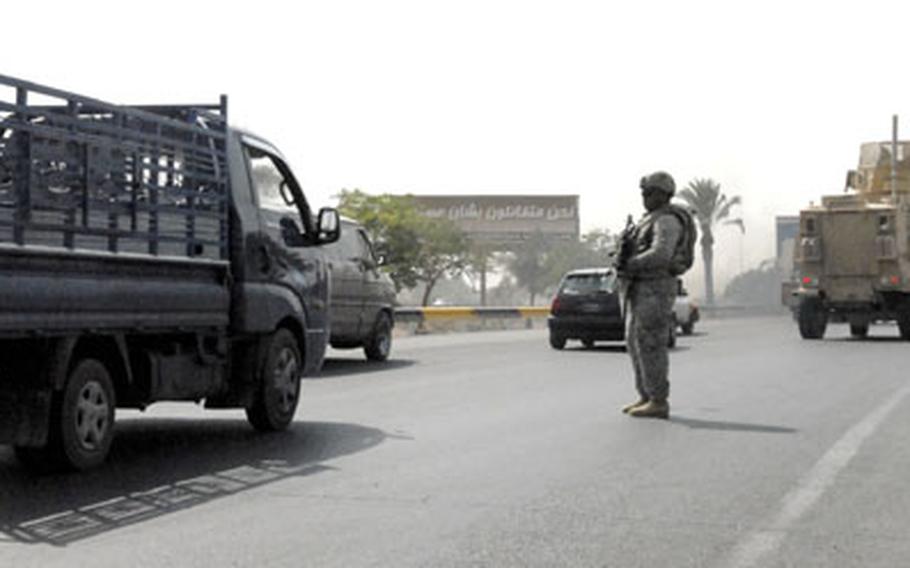 Now that life along the once-besieged highway from Baghdad International Airport to the city is calmer, city officials are giving the road a makeover expected to cost $50 million in Iraqi funds. (Leo Shane III / S&S)

It&#8217;s packed with traffic during much of the day, and an Iraqi concrete company has begun using a vacant lot near the airport as a makeshift mixing factory. Most weeks go by without any major accidents, never mind firefights.

The corridor, once called the world&#8217;s most deadly route, has become so calm that this week Col. Dave Hill, commander of the 1st Special Troops Battalion, 1st Brigade, held an impromptu business meeting with Iraqi officials on the roadway&#8217;s shoulder in the middle of the day to discuss placing a new security checkpoint.

Focused efforts from U.S. and Iraqi troops, increased cooperation from local residents and the cease-fire agreement with Muqtada al-Sadr&#8217;s militia earlier this year all played a role, he said.

Now that the area is relatively calm, Baghdad officials last month announced that the highway from the airport to the International Zone, a total of about 7.5 miles, would undergo a $50 million makeover. Paid by Iraqi funds, the project will include installing four U-turn areas and U-turn acceleration and decleration lanes.

"In 2004 this was called the death road," he said. "Now, because of our work together, we have a mostly secure road."

Secure, but not very pretty. To clear out insurgent&#8217;s hiding places, Iraqi crews ripped out hundreds of trees and shrubs, replacing them with concrete barriers. Temporary 10-foot-high walls separate the nearby neighborhoods from the traffic, and permanent ones are scheduled to be installed. And buildings pockmarked with bullet holes line both sides.

But Hill said the walls are nothing worse than the ones alongside the New Jersey Turnpike, and guardrails and curbs are planned now that contractors are willing to work in the area. Landscaping in the center island will help fill in craters left by roadside bombs.

He and Iraqi officials are quick to point out the highway is just one of many formerly turbulent areas of Baghdad, and that recent discoveries of weapons caches and arrests of key insurgents show that violence could return if security forces relax their efforts.

Bomb disposal crews are still finding makeshift explosives along the route, but much smaller and less effective than in the past. Two weeks ago Iraqi security forces were involved in a firefight near the road, although most of the firing seemed to come from the surrounding neighborhood.

"We still need the coalition here, for engineering and electronic monitoring assistance," the Iraqi general said. "We still can&#8217;t do it all by ourself."

In fact, the biggest fight of the week on the highway was during Hill&#8217;s business meeting, during which a local official stormed away after viewing changes to plans for the checkpoint placement. But, unlike most of the past fights here, Hill could laugh that one off.