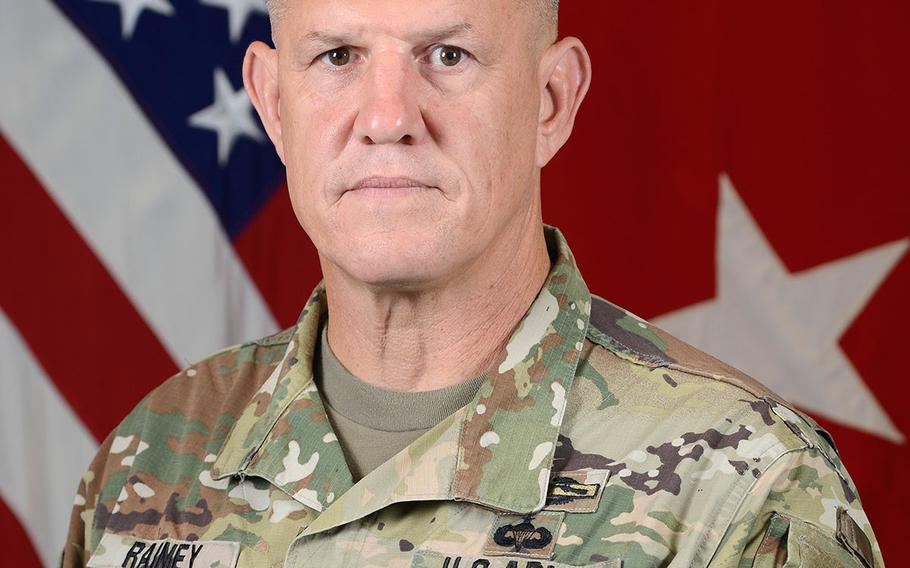 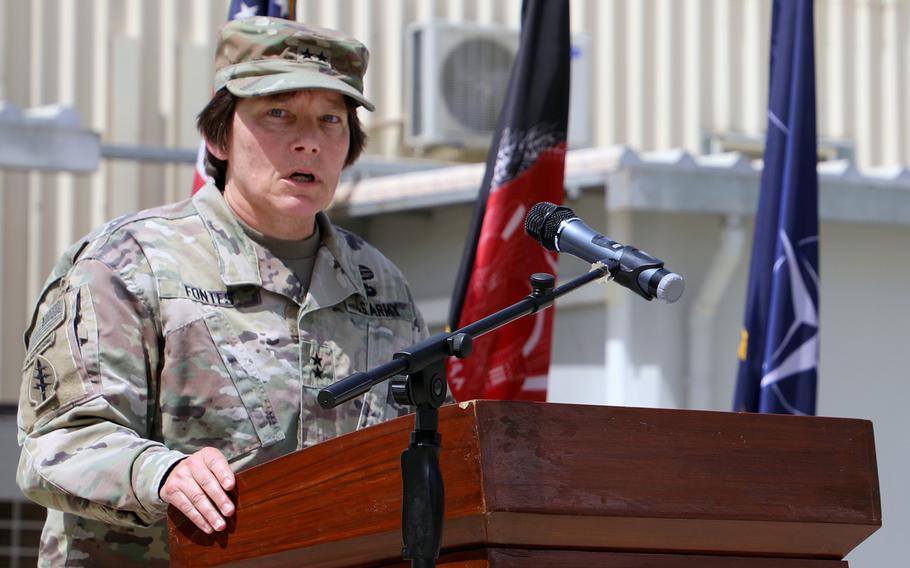 KABUL, Afghanistan — Army Maj. Gen. Robin Fontes, who last year assumed the highest post of any female servicemember in the war in Afghanistan, is being replaced as commander of Combined Security Transition Command-Afghanistan, NATO confirmed Thursday.

NATO’s Resolute Support mission in a statement described her departure as “a normal rotation” of leadership, but sources familiar with CSTC-A said they were surprised by the news, as Fontes was earlier expected to remain at the command’s helm until next summer.

A U.S. official told Stars and Stripes on Thursday that Fontes would be replaced by Maj. Gen. James Rainey, likely within weeks. Resolute Support could not immediately confirm the timing or the successor’s name.

Rainey was assigned to the Pentagon in January as assistant deputy chief of staff for the Army. Before that, he commanded the 3rd Infantry Division. Rainey also served as a deputy commanding general for U.S. Forces-Afghanistan and commander of Bagram Air Field.

CSTC-A, tasked with building Afghanistan’s security forces, is considered one of the most important commands within the NATO mission.

Fontes was widely respected among the military and diplomatic communities in Kabul. However, the Afghan security forces her command has helped train still aren’t capable of securing the country on their own after 17 years of war. Insurgents hold or contest more of the country’s territory than at any time since the 2001 invasion, according to Pentagon and independent analyses.

On Thursday, Gen. Joseph Votel, head of U.S. Central Command, dismissed suggestions that replacing Fontes was part of a new approach to the war by Miller.

“I expect that Gen. Miller and the team going forward will continue to approach this with the same vigor that Gen. Nicholson and Gen. Fontes did,” Votel told reporters at the Pentagon by phone from CENTCOM in Tampa.

“I do consider this to be, kind of, a normal rotation of leadership that is taking place,” Votel added.

Fontes assumed command of CSTC-A in July 2017. The assignment usually lasts one year, but NATO officials in Kabul told Stars and Stripes in the summer that the two-star general had volunteered to remain for an additional year.

Speaking at a ceremony last month, Fontes expressed satisfaction with being in Afghanistan.

“I have lived and worked in this region for 13 of my 32 professional years in the Army and can tell you with sincerity that there is no other time I would rather be in Afghanistan than right now,” she said.

When asked by Stars and Stripes in November about being the war’s highest-ranking woman in uniform, Fontes replied that she wanted to be judged based on her work within the command.

Fontes was tasked with assisting Afghan military officials in a deeply patriarchal country. However, both Afghan and U.S. officials spoke of a constructive working relationship throughout the year.

“I know Maj. Gen. Fontes very well, and she was always very cooperative,” an Afghan Defense Ministry official told Stars and Stripes when asked about Fontes’ departure. He requested to remain anonymous because he had not yet been informed of the decision.

“I just hope her replacement is as good,” the official said.

Under Fontes’ leadership, CSTC-A has seen the delivery of Afghanistan’s first UH-60 Black Hawk helicopters and has worked with the Afghanistan Finance Ministry to better show international donors how and where their money is being spent.

However, U.S.-led military and development assistance hasn’t thus far ended the stalemate with the Taliban and other insurgents.

In August, a military base in northern Faryab province fell to the Taliban because troops had run out of ammunition, food and water despite requesting supplies, a U.S. official told Stars and Stripes.

Also in August, Afghan forces battled other Taliban fighters who had launched an attack on the strategic city of Ghazni, less than 100 miles from Kabul. The insurgents had pushed deep into the city and U.S. air support was needed to push them back.