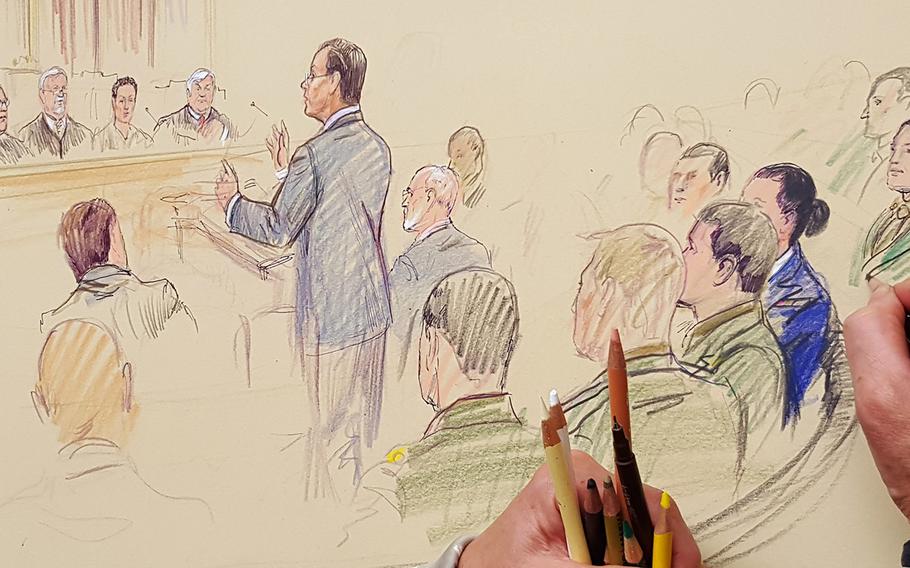 A sketch artist renders arguments during a hearing Wednesday at the U.S. Court of Appeals for the Armed Forces on religious freedom in the military. The case involves a Marine lance corporal who disobeyed orders to remove signs bearing a defiant religious quotation from her desk. photographed by Dianna Cahn 4/27/2016 ()

A sketch artist renders arguments during a hearing Wednesday at the U.S. Court of Appeals for the Armed Forces on religious freedom in the military. The case involves a Marine lance corporal who disobeyed orders to remove signs bearing a defiant religious quotation from her desk. photographed by Dianna Cahn 4/27/2016 () 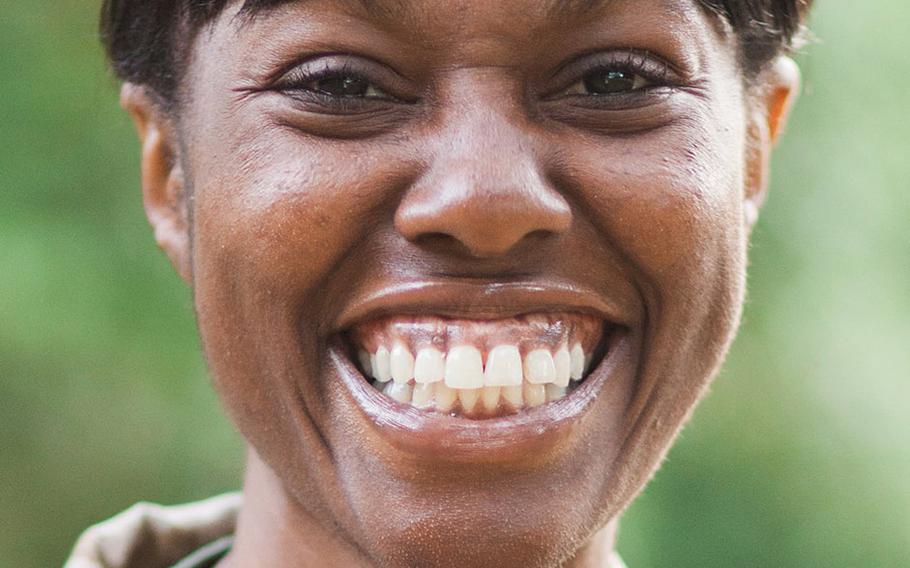 WASHINGTON – Rare arguments before the highest military court in the land Wednesday came down to whether a Marine’s refusal to obey orders to remove signs from her desk containing a biblical passage were her exercising her right of religious freedom or just plain insubordination.

Defenders of the Religious Freedom Restoration Act argued on Lance Cpl. Monifa Sterling’s behalf that the lower courts’ refusal to look at that aspect of the case “left the rights of the servicemember severely unprotected,” attorney Paul Clement said.

But the government maintained Sterling’s religious freedoms were not in question here. Attorney Brian Keller argued this was a case of military order and discipline, as the lower appeals court had concluded.

“This is a case of insubordination,” he told the court.

The case is the first of its kind to reach the U.S. Court of Appeals for the Armed Forces, raising potentially precedent-setting questions about the balance of religious freedoms in a military environment.

On Wednesday, a five-judge panel heard arguments about why it should consider the appeal on the basis that Sterling’s religious freedoms protected her from following orders. The judges will weigh the arguments and issue their decision at a later date.

“It’s an historic case, a precedent-setting case,” said Mike Berry, senior counsel and director of military affairs at First Liberty Institute, which is representing Sterling. “This is really the first time a military court has addressed the issue of whether [the Religious Freedom Restoration Act] applies to all people serving in the military and this case may very well serve as precedent for decades.”

Sterling’s case was taken on by strong advocates. Clement is a former solicitor general under President George W. Bush who has argued more than 75 cases before the U.S. Supreme Court.

An amicus brief supporting her appeal was brought by faith institutions that have relationships with the military and individuals ranging from senior ranking archdiocese officials to chaplains, rabbis and an Imam. Other briefs were filed by 43 members of Congress, leading conservative lawyers, nine generals and religious rights organizations supporting Sterling’s appeal.

Sterling was found guilty in a special court-martial for defying the order of a staff sergeant in 2013 to remove three signs at her work station bearing the words “No weapon formed against me shall prosper,” a modified quotation from Isaiah in the Bible. She later told the court that she posted them in a triangular fashion to represent the Holy Trinity.

When Sterling refused, the staff sergeant pulled the signs down. Sterling put them up again the next day. She was brought up on charges for disobeying that order as well as others at a later date. She was demoted and discharged for bad conduct.

Last year, an appeals judge upheld the lower court’s ruling, and agreed “the orders to remove the signs were lawful because the signs could be interpreted as combative and could be seen as contrary to good order and discipline.”

The lower court also concluded the Religious Freedom Restoration Act could not be invoked because there was no evidence that the order to remove the signs denied her ability to “exercise her religion” and she had never told the staff sergeant that the signs had a religious connotation or sought a religious practice accommodation.

Arguing that the religious freedom act was not adequately interpreted, Clement gave the court an example. According to the statute, it is legal to inconvenience a religious practice, but not to criminalize it – even if that practice is not mandated by the religion.

So if the government changes the speed limit on the road to a church, one could argue it’s an inconvenience but does not violate the law, Clement said. However, if they criminalized driving to that church, that would violate the statute.

Clement also argued though Sterling did not seek a religious “accommodation,” the religious freedom act still applies. “She got court-martialed for posting biblical verses,” he said.

“Does throwing a cloak of religion on it excuse her from thumbing her nose at her supervisor?” he asked.

Clement argued there was room for the court to explore this issue and determine whether the military had acted against religion.

Keller argued the Sterling was not punished for putting up religious signs, but rather for defying orders. He argued there was a mismatch between religious protections and hanging signs.

He also argued because Sterling never sought a religious accommodation and only raised the religious protections issue later, there was no argument that her religious freedoms were “substantially burdened” under the Religious Freedom Restoration Act.

Clement rebutted that because she invoked religious freedom later doesn’t mean that it’s not a fair consideration.

“When it’s invoked in defense, that’s when it needs to be explored,” he told the judges.