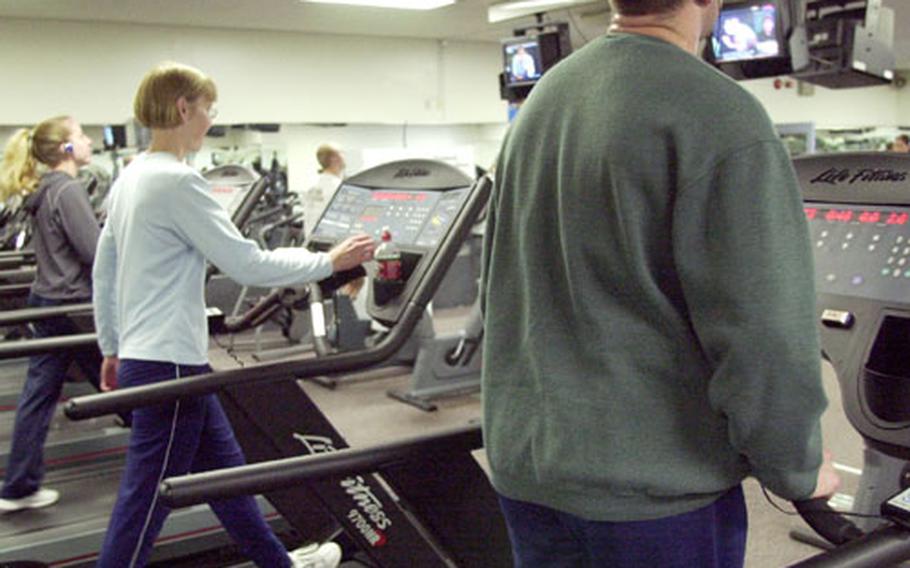 Gym patrons use treadmills at the Yokota Air Base Gym. In the future, the equipment will be outfitted with a computer-based FITLINXX system that will tailor workouts to their fitness goals. (Jim Schulz / S&S)

The Pacific Air Force commander believes a fit force is a ready force.

So PACAF is implementing a new computerized fitness monitoring system called FitLinxx to make sure servicemembers are both.

&#8220;Fitness is as important to our jobs as our technical training and experience,&#8221; Gen. Bill Begert, PACAF commander said in a statement last fall. &#8220;The mission should never suffer due to lack of endurance or physical strength, at home or in the field.&#8221;

Users type a personal identification number into a computerized kiosk at a base fitness center to start. The system tells them exactly what to do based on goals they previously established, such as losing weight or gaining cardiovascular endurance.

If they use the connected equipment, the system records the effects of the workout &#8212; calories burned, distance run and repetitions performed.

FitLinxx also tells users how to set up their workout, listing the weight and repetitions required for each strength machine or time and difficulty for cardio machines.

It only records repetitions done properly, so cheaters don&#8217;t get off the hook.

FitLinxx also will tell users exactly what they must accomplish that day, eliminating the need for records and exercise cards.

Servicemembers in mandatory fitness programs will be first to use the system.

The program will chart their progress for the base Health and Wellness Center.

After an initial consultation at the Health and Wellness Center, participants choose a goal, like increasing strength or losing fat. The FitLinxx system customizes a workout based on that goal.

The system will be implemented at Pacific air bases this spring, starting this month at Hickam Air Force Base, Hawaii.

It will be added in the next two months to Yokota, Misawa and Kadena air bases in Japan; Elmendorf and Eielson air force bases, Alaska; Osan and Kunsan air bases, South Korea; and Andersen Air Force Base, Guam.