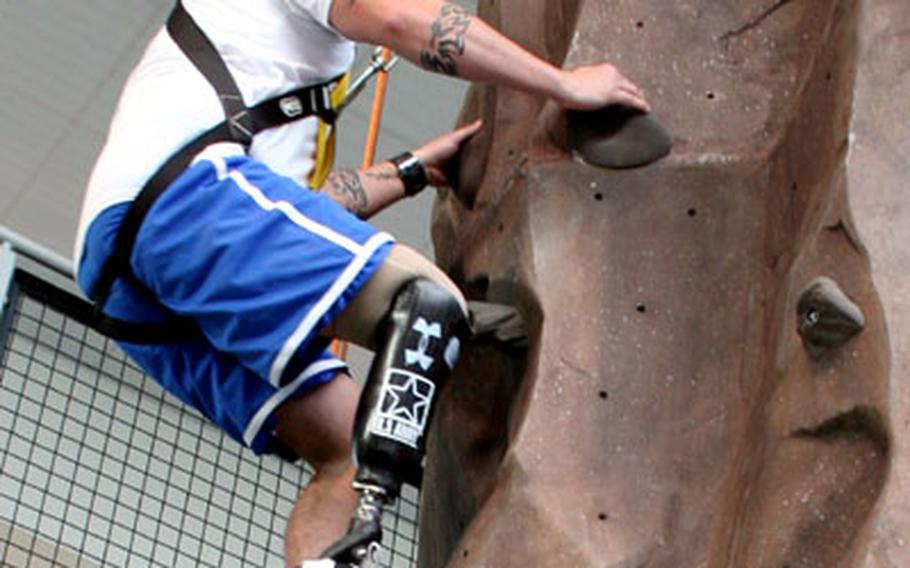 Army Staff Sgt. William Corp scales the climbing wall spanning the third and fourth floors of the Center for the Intrepid. Corp lost his right leg in an IED attack in Iraq earlier this year. (Leo Shane III / S&S)

WASHINGTON &#8212; Since he got his new prosthetic leg, Staff Sgt. William Corp doesn&#8217;t spend as much time on the climbing wall.

Not that he has trouble with the 30-foot tower: He can still do it in under two minutes. But the new leg fits better in his kayak, so he&#8217;s been spending more time swimming laps and in the wave pool, honing his skills there.

Corp is one of several dozen wounded troops who visit the new Center for the Intrepid on Fort Sam Houston near San Antonio every day. He lost his leg 18 months ago in a roadside bomb attack in Iraq; today, he splits his time between his own rehabilitation and coaching other amputees using the center&#8217;s aquatic complex.

&#8220;There is almost zero science right now to tell us what a young, athletic amputee should expect to be able to do,&#8221; said Maj. Stuart Campbell, head of physical therapy for the center.

&#8220;Most civilian young amputees do less rehab work in three years than our guys do in their first one. We want to push them and expose them to as much as possible.&#8221;

The new facility, just a few hundred yards from Brooke Army Medical Center, officially opened its doors 10 months ago. Administrators said that in coming months, the staff can expect to see a significant jump in programs, research and opportunities for patients.

The $50 million building was built to be a state-of-the-art rehabilitation center for amputees and burn victims and was funded completely through donations.

Two handicapped-accessible Fisher Houses sit beside the four-story facility, and patients travel between the two throughout the day for workouts, therapy sessions, mental health counseling and get-togethers with other troops.

Much of the center is an extension of offerings at Brooke. A 2,000-square-foot gym offers patients more room and equipment to continue their basic strength training.

But unlike the hospital or other military health complexes, the center also features high-tech research labs, including a limb adjustment workshop open to all amputees using the gym. Instead of just an office setting, the occupational therapists have a full mock apartment to test patients&#8217; skills.

A firearms simulator on the fourth floor lets troops keep their marksman skills up-to-date, and a driving simulator helps them adapt to driving with their injuries.

&#8220;Everybody who wants to stay in the military, we want to help them,&#8221; said John Jones, firearms training instructor for the center.

Jones, a retired Marine who lost his legs in a roadside bomb attack in Iraq in January 2005, now walks so fluidly that often other patients don&#8217;t know of his injuries when he wears long pants.

He said that&#8217;s another huge benefit of the new center: being able to see fellow patients and wounded troops in an environment outside the hospital.

Currently, the center only caters to active-duty outpatients from Brooke, but Menetrez said in the future patients could include guardsmen and reservists.

She also expects more research on prosthetics efficiency, new outreach projects with local veterans affairs offices and even more new patients. Currently, the center sees about 4,000 patient visits a month, and that could increase.

While most of the center&#8217;s work focuses on amputees, burn victim outpatients also have begun using the gym and counseling facilities.

Family support groups meet once a week in the fourth-floor conference room to talk about challenges and successes in their wounded servicemember&#8217;s recovery.

Center officials emphasize that while they&#8217;re proud of their work, they hope to be unemployed soon. Already the number of new severely wounded has dropped slightly, and trainers are working to get the outpatients independent and away from the center as soon as possible.

For Corp, that will come in the next few weeks. His medical review allowed him to stay on active duty, and the Army already has reassigned him to Program Executive Office Soldier work in Virginia. The agency develops advanced equipment and works to field it as quickly as possible.

Until then, he said he&#8217;ll be working with new amputee patients in the wave pool, checking to see if one of them can take over his coaching post when he leaves.

See more photos from the Center for the Intrepid here.